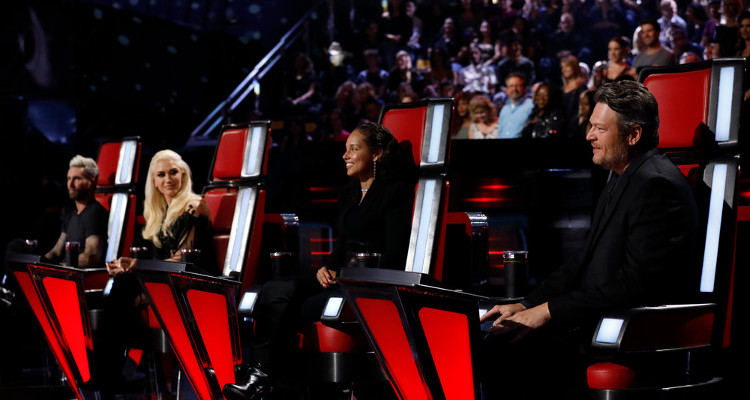 Chris Blue, Lauren Duski, Jesse Larson, and Aliyah Moulden are The Voice 2017 finalists. But who will win The Voice 2017? All four singers are loaded with talent, passion, and fierce determination to win The Voice Season 12. Part one of the finale aired Monday, May 22 and the finale part two airs May 23 at 9 p.m. EST.

The Voice season 12 finale kicked off on Monday. In the two-part finale, four terrific singers —Chris Blue, Lauren Duski, Jesse Larson, and Aliyah Moulden— will belt out three performances each to take home the prize.

The four judges —Gwen Stefani, Adam Levine, Alicia Keys, and Blake Shelton— are as excited as the contestants! Unfortunately, Team Gwen doesn’t have any artists performing in the finale. However, Team Blake has two artists: Aliyah Moulden and Lauren Duski, with Chris Blue and Jesse Larson being from Team Alicia and Team Adam respectively.

The Voice season 12 finale is going to be epic, especially with some stellar performances by this season’s Top 10 artists, mixed in with a few celebrity guest appearances. Former coach CeeLo Green will sing “Shining Star” with Jesse Larson; Little Big Town will perform “Better Man” with Lauren Duski; Luis Fonsi and Daddy Yankee will perform their No. 1 Billboard Hot 100 single “Despacito” with Mark Isaiah; Gladys Knight will perform “You’re the Best Thing That Ever Happened to Me” and “Neither One” with Vanessa Ferguson and TSoul; and Rascal Flatts will perform “Yours if You Want It” with Brennley Brown.

Joining them are Miley Cyrus, Chris Stapleton, Alessa Cara, and Zedd. Miley Cyrus and Jennifer Hudson are reportedly replacing Gwen Stefani and Alicia Keys for The Voice Season 13. But take it with a grain of salt as that’s just the word on the street at this point!

The Voice season 12 finale part one was opened by Moulden singing her original song, “Never be Lonely.” Her peppy number was followed by Larson’s soulful performance of “Takin’ it to the Streets.”

After the night’s first two solo performances, Keys and Blue crooned to “Diamonds and Pearls” while Moulden and Shelton delivered the next duet, singing “Dancing in the Streets.” Next, Larson and Levine performed “Let’s Go Crazy” and Duski and Shelton went country with “There’s a Tear in My Beer.”

The Voice 2017 finalists Chris Blue, Lauren Duski, Jesse Larson, and Aliyah Moulden are battling it out for this season’s big win. Blake Shelton’s team (Duski and Moulden) may have a better chance to win considering the country singer’s five wins in the show’s past 11 seasons. But if luck is all that’s needed, then Adam Levine’s Jesse Larson also stands a chance, as his coach has won three seasons. Though, Alicia Key’s Chris Blue can’t be ruled out either, as he currently has the highest vote count!