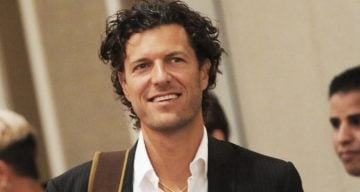 Shania Twain is currently bearing the brunt of a lot of people. Reportedly, many viewers claim that Twain’s performance on Dancing with the Stars’ latest episode was lip-synced. She has not commented on the rumored issue, but we wonder what her husband has to say about it! If you want to know more about Shania Twain and Frédéric Thiébaud, then keep reading.

If you watched Monday’s episode of Dancing with the Stars, then you must have surely witnessed Shania Twain’s spectacular performance. The 52-year-old singer was a guest judge on the show. Besides showing off her beautiful looks, Twain also performed a song from her latest album, which released in September.

Twain sang the song “Soldier” from her new album Now. However, viewers and fans are of the belief that Twain’s performance was lip-synced.

Many fans were surprised that Twain even agreed to lip-sync and took to social media to express their disappointment. For now, the news has not officially been confirmed, but people who saw the episode and the video feel that it was lip-synced.

Shania Twain is a famous Canadian singer who took a bit of a hiatus before releasing another album. Not only is she known for her songs, but Twain is also famous because of her personal life.

Shania Twain’s husband drama was the talk of the town back in 2010. However, Twain has moved past that and is now happily married to Frédéric Thiébaud.

If you want to know more about their relationship, then we have all the details for you right here.

Thiébaud was born in Switzerland in 1970, which makes Frédéric Thiébaud’s age to be 47. Unlike his wife, who is in the music industry, Thiébaud is a businessman and works as an executive at Nestlé.

Like Twain, Thiébaud was also married to someone else before. Thiébaud’s first marriage was with Marie-Anne Thiébaud, who was Twain’s best friend. Now, there is a twist in the story.

Twain’s first husband, Robert John “Mutt” Lange, allegedly had an affair with Marie-Anne Thiébaud. When Twain found out about it, she was devastated.

A close friend of Twain revealed, “It’s a multiple betrayal because it involves all the people around her, the people she is closest to.” And also added, “She is in absolute, total shock.”

The reason behind Twain and Lange’s divorce is not known. Lange even claimed that the affair was not the reason for their breakup.

Marie-Anne and Frédéric Thiébaud’s marriage also fell apart and ended up in a divorce. It sounds like a really dramatic story, but hearts and trust were broken. However, both Twain and Thiébaud moved on from the divorce and found love again in each other’s arms.

In 2010, it was announced that Twain was engaged to Thiébaud. Reportedly, Thiébaud asked Twain to marry him and presented her with a three-karat Solitaire diamond ring.

Twain said about her relationship with Thiébaud, “It’s three years now since our separations, and we had a good year of just suffering together as friends. And don’t forget I’d known him for many years before. So it was that, then another year of falling in love. It didn’t feel like a whirlwind at all, to be honest.”

Initially, they were not very vocal about their relationship. But later on, Twain revealed the news to her fans that she was dating Thiébaud.

Twain explained, “He has been the most constant companion and support for both Eja and I. And having gone through the suffering of his family splitting apart at the same time and under the same extreme circumstances, he understands me better than anyone. We leaned on one another through the ups and downs, taking turns holding each other up. We’ve become stronger and closer through it all, as have our children, Eja and Johanna, Fred’s 8-year-old daughter.”

A year later, on January 1, 2011, the couple walked down the aisle in Rincón, Puerto Rico. Their wedding was a low-key affair with only close friends and family.

In an interview, Shania Twain gushed about Thiébaud and said, “Fred is not only nice, he’s incredible. He’s attentive, brighter than God should ever allow any one man to be, funny, romantic, and cute as heck. Most of all, he shows what he feels, and that’s a quality that could come in any shape or size and be admired — it just so happens that Fred has a very gorgeous shape. He’s too good to be true, only he’s real! Good for me, is all I can say, and I’m loving every minute of it.”