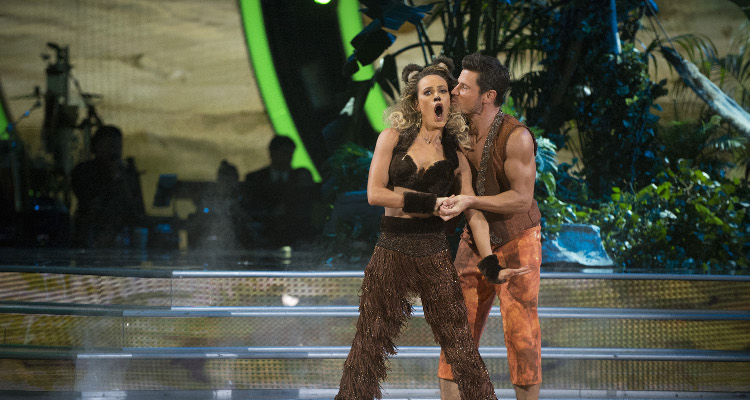 Nick Lachey and Peta Murgatroyd got eliminated on Dancing with the Stars on Monday night due to their low scores and a disappointing performance. Lachey had put in a lot of effort to improve his dancing skills, but the other contestants also raised their game leading to his elimination. There was music, fiesta, and fun on the show last night, and the judges had a tough time deciding on their scores.

There was music in the air and color in the proceedings on the Dancing with the Stars episode that aired on Monday, October 23, 2017, as the contestants once again showcased their dancing skills. Dancing with the Stars season 25 is currently on, and the program has risen in popularity over the years thanks to the fantastic dance performances and eclectic imagination shown by the contestants.

Unfortunately, some of the contestants have to go home because there is only one Mirrorball Trophy and only one pair can get the top prize. Now viewers are eager to know who got eliminated on Dancing with the Stars last night.

So keep reading to know the results from Dancing with the Stars.

Who Got Kicked Off Dancing with the Stars Last Night?

Unfortunately, dancing pair Nick Lachey and Peta Murgatroyd got eliminated and had to go home without getting anywhere near the coveted trophy. They performed the Samba to the song, “Wild Wild West” by Dru Hill, Will Smith, and Kool Mo Dee replete with hip thrusts, pelvic thrusts, attitude, and a final pose.

The judges were not impressed enough even though it was clear that Lachey had worked so hard on his dancing skills. Their scores reflected the general disappointment of the judges with the pair’s performance.

Their score was 26/40, keeping them at the bottom of the pack once again. But this time, they were eliminated from the heated competition.

The highest score of the night was earned by Lindsey Stirling and Mark Ballas as they did the Argentine Tango to the song “Human” by Sevdaliza. Their performance was sexy and fluid, and Stirling managed to contort her body into all kinds of impossible positions. And, the judges were simply blown away.

Len Goodman said, “I thought the choreography was phenomenal, I thought the dancing was brilliant. I gave you a ten last week because you deserved it and I’m not going to lie you deserve another 10.”

Bruno Tonioli even called their performance the “best dance of the season.” Was it any wonder that they gave the maximum score 40/40 to this exciting pair?

The most entertaining performance of the night was by Terrell Owens and Cheryl Burke who jived to the song “Feel It Still” by Portugal. The Man. The sets were fantastic, the concept was fun, and the pair danced like their life depended on it but still managed to enjoy themselves and the audiences.

The judges were impressed and gave them a high score of 37/40 thereby sending them into the upper reaches of the competition. Guest judge Shania Twain gave them a perfect 10.

Tonioli told Owens, “You had such a slick, sexy cool persona. You’ve become a better and better performer.”

The Pressure Is Increasing

It was sad to see Nick Lachey and Peta Murgatroyd go as the audience had come to like them. And it was obvious that Lachey was putting in so much effort to improve his dancing. Now, the pressure is on the others to avoid being at the bottom and get eliminated.

The performances are going to get better as the tension in the competition increases. That’s exactly why you should not miss a single episode of DWTS season 25. DWTS season 25 is a great ride so don’t miss it!

Dancing with the Stars airs at 8:00 pm EST on Mondays on ABC.