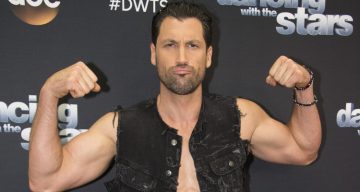 If you have been religiously watching the show, Dancing with the Stars, then you must be aware that during last week’s performance, Maks Chmerkovskiy was not present. It was revealed that Chmerkovskiy opted out of the performance because of some undisclosed personal issue. His dance partner, Vanessa Lachey performed with eliminated dancer Alan Bersten.

Now Chmerkovskiy said he could not perform due to a personal reason, but there were rumors that the dance partners did not get along and it was rumored to be the real reason behind Chmerkovskiy missing his performance on October 2.

A source added, “There’s a big chemistry issue, they both have big personalities and that’s not always the best recipe for a good partnership.” Due to this, there have been some speculations about Maks and Vanessa’s Dancing with the Stars’ performance.

Is the Rumored Feud Over?

On Saturday, it was reported that Maks and Vanessa gave each other a hug while leaving the Dancing with the Stars rehearsal. It looks like whatever rumored animosity they have for each other has been put behind. In fact, on Wednesday, Chmerkovskiy took to Twitter and apologized to his partner as he wrote, “As you are all aware, I had to leave the show last week to take care of some personal issues. I take full responsibility for my absence and want to apologize to my partner Vanessa. We are both looking forward to dancing for our fans next week!”

However, sources report that both of them are acting nice only in front of the camera. The source explained, “Their personalities are very similar so they disagree about everything. They refuse to give into one another,” before adding, “They’re playing nice for the cameras but both are miserable paired with each other — there is a lot of fighting going on behind the scenes.”

Will Maks Chmerkovskiy Return to Dancing with the Stars?

Whether there are differences or not, only time will tell. Also, these fight rumors are not confirmed and should be taken with a grain of salt. For now, the good news is that they are not letting their speculated differences affect their performance. Lachey will be performing with her dance partner Chmerkovskiy on the stage of DWTS on Monday, October 9. One source explained, “They have already rehearsed this week. Things are good. It’s water under the bridge. Things are returning to normal.”

If you are excited to watch Lachey and Chmerkovskiy’s dance performance, then make sure you tune into ABC tonight at 8:00 p.m. EST.