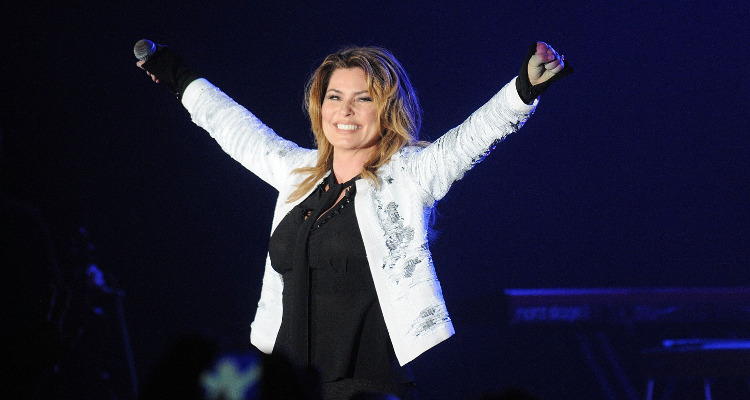 Shania Twain took a trip to the movies on Dancing with the Stars last night. The guest judge performed her latest song, but got mixed reactions to her performance.

Dancing with the Stars went to the movies last night and was joined by special guest judge, Shania Twain. The Canadian superstar performed her newest song, “Soldier” from the soundtrack of the upcoming movie, Thank You for Your Service. But her judging and singing elicited a flurry of unsavory reactions on Twitter after last night’s DWTS performance. Did Shania Twain lip sync on DWTS? Here’s what you need to know.

Usually fans would go wild if Shania Twain appeared on a popular show. Though they did go wild over her DWTS appearance, it was not in a good way. Twitterati made it their personal business to criticize everything about the 52-year-old’s stint on the DWTS judging panel last night! Ouch!

She got flak for being a softie and being generous with the scores. Some took to Twitter to chide ABC for calling a judge on a dance show who couldn’t offer constructive criticism on dance. And some had to be snide and remark about Twain’s alleged botched cosmetic procedures.

When it came time for her to perform “Soldier” from Thank You for Your Service, Twitterverse went to town! They held nothing back as they accused her of miming the lyrics and not really singing her song. As beautiful as the performance with the DWTS troupe looked, the Twitterverse was not feeling it!

How can you can be a singer and still get paid but not actually sing?! Such a disappointment. Also, she was exceedingly awkward as a judge!

Disgruntled fans tweeted their displeasure on Twain’s performance, her scoring logic, and even her appearance. Some even alluded to Mariah Carey (who had a New Year’s Eve lip sync disaster of her own) in their posts. A few tweets say that the alleged Botox made her unrecognizable, while some accuse her of playing favorites and questioned how she gave Drew Scott a higher score over Nick Lachey!

Check out Shania croon to “Soldier” below and you can be the judge!

“Don’t Impress Me Much”

Twain’s performance was undeniably awkward and some believe it’s because she wasn’t performing with her regular band. But this isn’t the first time a dance show appearance landed the “You’re Still the One” singer in hot water. A month ago, she performed on Strictly Come Dancing — DWTS’ British cousin— and she was blasted with accusations of lip syncing then, too!

Whether she mimed the live performance or not is debatable, but there is a possible reason that she might have done so. More than a decade ago, declining vocal health forced the popstar to take a hiatus from performing. She had to cancel several dates on her tour because of a respiratory infection.

In her 2011 autobiography, From This Moment On, she revealed that she sought medical help when her singing and speaking voice weakened. Specialists diagnosed her with dysphonia caused by lesions on her vocal cords. The condition was a result of her Lyme disease diagnosis. She feared that the illness would render her unable to sing again but she fought to regain her voice.

Whatever Shania Twain has done to her face, I am not a fan. Cheek implants and Botox? Ugh. She was so pretty. Just age naturally #DWTS

“I was very scared for a little while that I wouldn’t sing again, ever. I went through that moment, but I found a way. I found a way to do it,” said the songstress. She goes through a “very, very difficult” process of lengthy warmups and physical therapy to use her voice now.

She made a comeback after 15 years with her new album, Now and is singing on the soundtrack for the war drama movie, Thank You for Your Service.

Haters can say what they want. We think Shania Twain was splendid last night!

Are we sure that’s Shania Twain?? #DWTS pic.twitter.com/OdLcNDbbm7