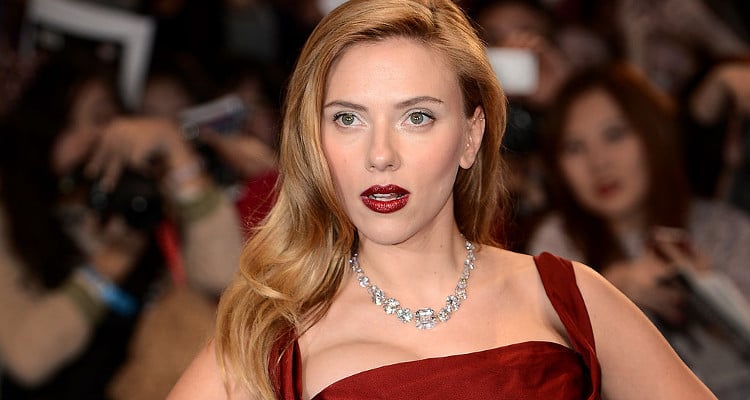 With the release of her new film, Scarlett Johansson will definitely see an increase in her net worth. Currently, Scarlett Johansson’s net worth is estimated to be $100.0 million. We have details on how rich the actress is as well as facts about her family.

Scarlett Johansson is known as a style icon and a brilliant actress. Recently the 32-year-old looked amazing at the New York Premiere of her latest film Ghost in the Shell. On Wednesday, Scarlett wore a Balmain gown with prismatic crystals and metallic stripes, a plunging neckline and a side slit.

The actor is currently in a custody battle with her husband of their daughter, Rose. While on Good Morning America Wednesday (March 29) morning, she revealed that a future in politics might be in store for her once her daughter is old enough. A political career could surely increase Scarlett Johansson’s current net worth of $100.0 million. Let us take a closer look at how rich Scarlett Johansson is.

How Much is Scarlett Johansson’s Net Worth?

Scarlett earns a good amount of money from her movies as well as various endorsements and other appearances, including campaigns for Calvin Klein, L’Oréal, and Louis Vuitton. She has also been the face of the Spanish clothing brand Mango since 2009. That same year, Scarlett was named the face of the new Dolce & Gabbana makeup collection.

Forbes listed Scarlett Johansson as the top-grossing actor of 2016. Her yearly income is estimated to be $7.6 million with an added $1.0 million from endorsements. Scarlett Johansson’s net worth in recent years are:

In 2016, Scarlett bought a new house for $2.2 million in the Hamptons. The house sits on 1.4 acres and has a heated outdoor swimming pool. There are four bedrooms, including a master suite with a balcony and a fireplace.

Also Read: Keira Knightley’s Net Worth: How Much is the “Atonement” Actress Worth?

All my Scarlett files reached over 128GB… Now I have to buy a new USB… 😂 • Young #JessicaBiel & Scarlett – by the AMAZING @davisfactor. #throwbackthursday

Scarlett Johansson was born on November 22, 1984, in Manhattan, New York. Scarlett’s father is Karsten Johansson, an architect, who originally is from Copenhagen, Denmark. Her paternal grandfather, Ejner Johansson, was a screenwriter, art historian, and director. Scarlett’s mother, Melanie Sloan, is a Polish and Minsk producer from the Bronx.

The actor’s family is heavily invested in the movie industry. Her older sister Vanessa is also an actor. Scarlett has a twin brother, Hunter, who appeared with his sister in the film Manny & Lo. She also has an older brother named Adrian and an older half-brother, Christian, from her dad’s first marriage. Scarlett has dual citizenship in the U.S. and Denmark.

Scarlett and her twin brother went to PS 41 elementary school in Greenwich Village. In 2002, she graduated with theatrical training from the Professional Children’s School in Manhattan.

I try to refrain from talking about my personal life on here (if you've followed me for 2 years, you know I used this IG like a journal to my life everyday) but I thought I'd catch you guys up. I think the last time I talked about my personal life was when I did an internship for Fashion Week? That was 5 months ago. Since then here's a simple list of highlights: * offered to be a co-executive producer on a SAG film * offered to design a SAG movie poster * I attended my first protest! It was the day after Trump became our President-Elect. I marched in Chicago along with 6,000 people. * designed my first book – gave it to ⬇️ * met & made friends with Hailee Steinfeld * ended up photographing The Edge of Seventeen movie props and got Hailee's Critics Choice Awards invitation * partied & extensively talked with Sabrina Carpenter (ugh love that girl) * Attended the Women's March on Chicago along with 250,000+ people. * partied & took endless selfies with Maggie Lindemann * attended 10+ advance screenings * got advice from Dax Shepard & Michael Peña * got on collegiate scholars * learned HTML & CSS coding I might be forgetting things but this week I am going to a screening of "Life", meeting actor, Jason Segel and director, Charlie McDowell for a screening of "The Discovery". I'm possibly partying it up with Bebe Rexha in a couple days but that's not settled yet. 😂

Scarlett Johansson has had her fair share of relationships. When she was at the Professional Children’s School, she began dating her classmate Jack Antonoff, who went on to become a musician and is currently dating Lena Dunham. In 2004, Scarlett started dating her Black Dahlia costar Josh Hartnett for almost two years.

In 2007, Scarlett started dating Ryan Reynolds. In May 2008, they announced their engagement and were married in a small ceremony near Tofino, British Columbia four months later. Two years later they announced their separation, with their divorce being finalized on July 1, 2011. Scarlett started dating Sean Penn, but that only lasted until June 2011.

Scarlett then dated advertising executive Nate Naylor for a year and a half. However, the pair ended their relationship in October 2012. A month later, she was in a relationship with French journalist Romain Dauriac. In September 2013, the two announced their engagement.

A year later, it was revealed that the two welcomed their first child, Rose Dorothy Dauriac, but her date of birth was not announced. On October 1, 2014, Scarlett and Romain walked down the aisle in Philipsburg, Montana. In January 2017, news of their separation surfaced, with Scarlett filing for divorce on March 7, 2017.

Scarlett started acting at a very young age, and her first film was the 1994 movie North. She has since taken on more roles and is now one of the most notable faces in Hollywood.

Some of Scarlett Johansson’s movies include Just Cause, Lost in Translation, The Island, The Prestige, The Nanny Diaries, Vicky Cristina Barcelona, He’s Just Not That Into You, We Bought a Zoo, Hitchcock, Lucy, The Jungle Book, and Sing.

Scarlett’s latest film, Ghost in the Shell, was released on March 31, 2017 and is expected to do well in the box office. Her upcoming film Rough Nights, is expected to be released June 16, 2017, and the eagerly awaited Avengers: Infinity War should hit theaters next year.

Besides being a brilliant actress and a role model to many people, Scarlett is also blessed with a beautiful voice. Her first debut studio album Anywhere I Lay My Head was released on May 16, 2008.

Her second album, Break Up, was a collaborative effort between herself and Pete Yorn released on May 25, 2009. About the lead single, “Realtor,” Scarlett said, “The idea of two people vocalizing their relationship through duets…I always thought of it as just a small project between friends. It perfectly captured where I was in my life at the time.” She sang in the Oscar nominated song, “Before My Time” with Joshua Bell, written by J. Ralph.