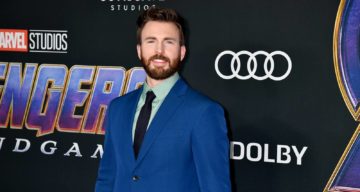 The 34-year-old actor has been a staple in Hollywood for the last 15 years, making himself a household name due to his not-so-recent roles as Captain America, which have made him more famous than he ever thought possible when he first started—not to mention wealthier than he ever dreamed. The wide success of Marvel’s The Avengers and Captain America films have catapulted Evans to a whole new level of fame, allowing him to pursue his dream and take on new opportunities.

Throughout his career Evans has appeared in a slew of high-profile movies and TV shows but remained incredibly humble during the whole process. (You can still be humble while making millions of dollars and spending $300.00 on a pair of J-brand jeans!) But one of the reasons Evans has sustained longevity is because he’s not a diva. He’s easy to work with and doesn’t take his craft for granted; he enjoys what he does best.

Christopher Evans (not to be confused with the presenter with the same name) was born on June 13, 1981 in Boston, Massachusetts to parents Lisa and Bob Evans. He has three siblings: Carly, Shanna, and Scott. His younger brother Scott is also an actor and the two are very close, often going to red carpets and TV interviews together when possible. Evans graduated from Lincoln-Sudbury Regional High School and moved to New York to pursue acting where he worked hard to get an agent and luckily got a call. Evans was also raised Catholic like the rest of his family but identifies as a Buddhist.

Before Evans donned a shield and sported red, white, and blue, his most notable role was as a jock in the 2001 comedy film, Not Another Teen Movie. But Evans would soon grow out of those pretty-boy typecast roles that always seemed to require next to no clothing.—though many still remember the actor’s nude scenes in the 2011 comedy, What’s Your Number? (which was also for comedic purposes). Before Evans took roles with more depth, he continued to build his brand and his salary, with roles in the 2004 suspense thriller, Cellular and the first Fantastic Four movies in which he played Johnny Storm/The Human Torch as more of a comic relief. But the time for laughs would take a break once Evans got the call to play famed hero Steve Rogers/Captain America.

Being Captain America is without a doubt, Evans’ most famous and lucrative role to date. It cemented his status as an A-list actor and has allowed him to pursue different opportunities. He also made his directorial debut in the 2014 film Before We Go, which premiered at the Toronto International Film Festival. The film was well received and according to Esquire, Evans would like to try his hand in directing again.

But before he tried his hand at being on the opposite side of the lens, Evans amazed audiences all over the globe with his portrayal of Captain America, a scrawny kid from Brooklyn who took a serum that endowed him with power in order to fight the Nazis and Hydra in the 1940s. Evans would continue this role in the Avengers sequels and respective Captain America sequels, culminating in his most recent film, Captain America: Civil War. It’s hard to believe that Evans almost didn’t take the mantle of the morally superior super soldier if it hadn’t been for co-stars Robert Downey Jr. and Mark Ruffalo, who persuaded him ultimately. Evans was nervous about being in such a lengthy contract but didn’t let his fear stop him—he let it encourage him instead.

The first Captain America role only paid a low $300,000 (Marvel can be known for having short purse strings unless actors negotiate for blockbuster sequels) while The Avengers franchise has earned Evans approximately $2.0 million to $3.0 million for the sequels, according to The Richest. And according to Cinemblend, he reportedly made $6.9 million from The Avengers: Age of Ultron, which is a great increase and has added to his bank account. Evans probably could’ve made more, but it really depends on the agent and the actor’s leverage. His long-time friend and co-star Scarlett Johansson (Black Widow) made $20.0 million from Age of Ultron. But the money doesn’t bother Evans, who seems content with his life and the quality of his work.

So how does a movie star like Evans live? According to Variety, his Laurel Canyon house in Los Angeles was purchased for $3.5 million and is 20,000 square feet with three bedrooms and four and a half bathrooms.

Evans reprises his role in Captain America: Civil War, which hit theaters today, and the film is sure to add to his $40.0 million net worth.