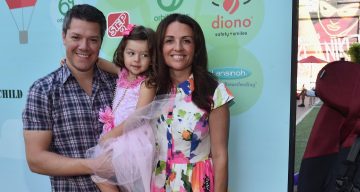 Dr. Jonathan Nassos is an experienced and qualified orthopedic surgeon who now treats patients at his own facilities. He is married to reality TV star Jenni Pulos and is the proud father of two beautiful daughters, Alianna Marika and Georgia Grace. Nassos is a busy man and takes time out to indulge in his hobbies, which include playing basketball and golf. Read on to know more about this conscientious doctor who cares deeply about his patients.

Jenni Pulos’ husband, Dr. Jonathan Nassos, is a delighted man indeed. Not only is his career and marriage with Pulos going well, but he also gets to indulge in his favorite activity—spending as much time as possible with his two precious princesses, Alianna Marika and Georgia Grace.

People want to know more about the good doctor, so here are a few details from Dr. Jonathan Nassos’ wiki.

Who Is Jonathan Nassos?

Jonathan Nassos is an orthopedic surgeon who specializes in the surgical and non-surgical treatment of musculoskeletal disorders and injuries, including arthroscopic surgery, joint replacement, and orthopedic trauma.

He is currently the lead orthopedic surgeon at his own facility called Nassos Orthopaedic Surgery & Sports Medicine in Sherman Oaks, California and offers his services in Pomona and Los Angeles, California, as well.

Dr. Nassos has been an associate master instructor of arthroscopy for the Arthroscopy Association of North America, where he teaches innovative and cutting-edge arthroscopic surgical procedures to other orthopedic surgeons. He is also a Fellow of the American Academy of Orthopaedic Surgeons.

He Is a Highly Qualified Surgeon

Dr. Nassos completed his bachelor’s degree in arts and economics from the University of Illinois at Urbana-Champaign before earning a Doctor of Medicine at the Stritch School of Medicine at Loyola University Medical Center in Chicago, Illinois.

In 2004, he studied towards his M.D. in orthopedic surgery at Loyola University Medical Center and graduated in 2008. Following his residency, Dr. Nassos completed an orthopedic sports medicine fellowship at the famed Kerlan-Jobe Orthopaedic Clinic in Los Angeles, California.

During this time, he worked as an assistant team physician for prestigious sports teams like the Los Angeles Lakers, Dodgers, Kings, Sparks, and Anaheim Ducks, as well as Loyola Marymount University.

From 2011 to 2012, Dr. Nassos was an orthopedic consultant for the Chicago Rush Arena Football Team as well.

In addition to working at his orthopedic practice, Dr. Nassos also devotes his time to research in his field. He has presented his research findings at both national and international scientific meetings.

He Is Married to TV Star Jenni Pulos

He married Pulos in Chicago during Memorial Day weekend in 2012. They have had to divide their time between Los Angeles, New York City, and Chicago because of their work.

Dr. Nassos Has Appeared on Flipping Out

Jenni Pulos is famous for having appeared on the American reality TV series, Flipping Out, since its debut on Bravo TV on July 31, 2007. She has appeared on all the seasons up to the end of season 10 but parted ways with star house flipper, Jeff Lewis, at the start of season 11, according to reports.

Dr. Nassos has appeared in his wife’s show, Flipping Out, several times in the last few years. He first appeared from the time when he was her fiancé and then later again when he became her husband.

He Is a Proud Papa

Dr. Nassos loves animals and has two dogs of his own. When he is not working, he can be found running, playing basketball, and indulging in a golf game.

What he loves to do more than anything else in this world is playing with his baby girl, Georgia Grace, who was born on June 7, 2017. He calls himself a “#proudpapa” of two, and a dad who is “#twins” with his baby girl.

Paging @jonathannassos Dr Jonathan Nassos. It’s your daughter #georgiagrace and I think I’ve got a future in this. #doctor

Dr. Nassos Has Helped Many Patients

Dr. Nassos is busy with his responsibilities as a father, husband, surgeon, and businessman right now, and he is trying to help as many patients as possible with his knowledge and skills.

His wife ,Jenni Pulos, supports him in all his endeavors, and both are working hard to raise their children in the right way.

The future looks promising and exciting for Dr. Jonathan Nassos.