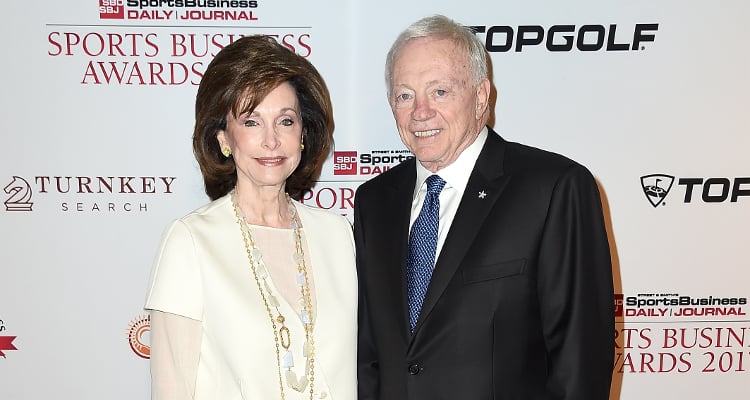 Eugenia “Gene” Jones is not just the wife of the man who owns the Dallas Cowboys and revolutionized the NFL. She might tend to keep out of the spotlight, but Jerry Jones’ wife’s accomplishments don’t go unnoticed.

Jerry Jones is considered to be one of the richest guys in the NFL and he doesn’t even play! He makes his money by leading one of the most valuable sports teams, the Dallas Cowboys. But Jerry Jones isn’t the only money-maker in the house. His wife, Eugenia “Gene” Jones has her own accomplishments to be proud of. Find out about the woman behind Jerry Jones’ success in our Eugenia Jones wiki.

They Met on a Blind Date

Born Eugenia Chambers, the daughter of a small-town banker went to the University of Arkansas where Jerry Jones, the son of a grocery entrepreneur, was the star of the football team. When she was a freshman, the former Miss Arkansas met the University’s football co-captain on a blind date. Her friends spoke highly of him, but she didn’t know Jerry Jones. So, she asked her friends to accompany her on their first date.

After dinner, Jerry and Gene joined their friends at a state fair later that evening. All the young men were winning teddy bears for the ladies. Jerry wanted to win his date one, too. But try as he might, he couldn’t but that didn’t mean Gene didn’t get her bear!

Jerry disappeared when the group moved to another booth, and reappeared with the largest bear in the fair. “I later found out that Jerry couldn’t win a bear, so he went off and found someone to sell him one,” Gene recalled. “The only thing bigger than that bear was his smile.” That bear must have been their lucky charm! They married at the end of sophomore year and have been together for more than five decades.

Jerry and Gene are parents to three children. Stephen, at 53 years old, is the eldest. He graduated from his parents’ alma mater with a degree in chemical engineering and also played football. He’s currently the Executive Vice President, CEO, and Director of Player Personnel for the Dallas Cowboys. Stephen is credited with saving the franchise by convincing his father to sign Zack Martin over Johnny Manziel.

Charlotte Jones Anderson, the couple’s only daughter, is the Executive Vice President and Chief Brand Officer. She also follows in her mother’s philanthropic footsteps and is serving on the National Advisory Board of the Salvation Army, becoming the first woman to be the chairman of the organization. As the NFL Foundation’s chairman since 2012, she spearheads the philanthropic efforts of the league, including player care, youth football, and medical research. The Stanford graduate is married to Shy Anderson and they live in Dallas with their daughter, Haley, and sons, Shy Jr. and Paxton.

Also Read: Tiffany Thompson: Everything You Need to Know about Ezekiel Elliott’s Ex-Girlfriend

Their youngest child, Jerry Jones Jr., is the Cowboys’ Chief Sales and Marketing Officer and Executive Vice President. He has a daughter named Juliette from a relationship with Northern Exposure actress, Janine Turner.

She Supports the Arts

The AT&T Stadium (which is home to the Dallas Cowboys) may be called “Jerry’s World,” but Gene has her own part in it. Eugenia was a member of the AT&T Center for Performing Arts and the Texas Cultural Trust Board. Under her leadership, 18 contemporary artists were commissioned to create site-specific artworks for the stadium, which would become the renowned Dallas Cowboys Art Collection.

With her daughter and a small council, Eugenia curates the art at the stadium. She also serves as co-chairman of the Meadows School of Arts. She keeps her charity efforts on the down-low and has donated to a trust fund to help needy medical students.