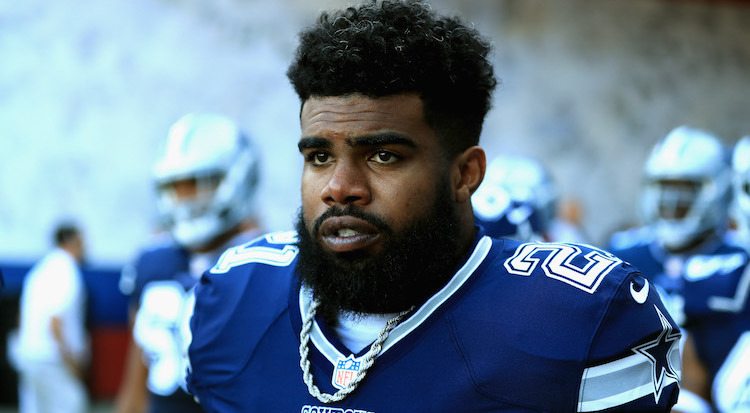 Dallas Cowboys player Ezekiel Elliott is facing a disheartening six-game suspension after his ex-girlfriend, Tiffany Thompson, accused him of assault. Some sources say she allegedly threatened the player using stereotypes to her advantage, while others support her accusations against the athlete. Elliott’s loyal fans are expressing their shock and outrage at the situation with #FreeZeke on Twitter. Here’s what you need to know about Ezekiel Elliott’s ex-girlfriend, and the domestic abuse charges against him.

In the summer of 2016, when Ezekiel Elliott and Tiffany Thompson first ended their relationship, Thompson took to Instagram to accuse Elliott of domestic violence. On July 20, she captioned an image on social media: “Just for every woman out there getting abused it’s time to put a stop to it. This has been happening to me for months and it finally got out of control to where I was picked up and thrown across the room by my arms. Thrown into walls. Being choked to where I have to gasp for breath. Bruised everywhere, mentally and physically abused. It’s not okay. So, I want each and every one of you girls to step away now from domestic violence. You’re worth so much more. I got told it was called ‘tough love’ I’m sorry if you love someone you don’t touch your loved ones.”

Tiffany Thompson’s Instagram post at the time was accompanied by images of bruises and injuries allegedly inflicted from the athlete. Ezekiel Elliott’s accuser’s words stuck, and more than a year later, on August 11, the player was suspended without pay for the first six games of his 2017 NFL season. But Elliott had a different story to tell. He denied the allegations, and a source close to him said Elliott has proof that Thompson was trying to set him up after he broke up with her, and uninvited her from this birthday party. “Per a source, Elliott broke off the relationship and alleged victim said she would ruin him if he did. Thus, the accusations.” According to the Cowboys star, Thompson said to him, “You’re a black male athlete. I’m a white girl. They are not going to believe you.”

Officials of Ohio state found no reliable evidence from their investigation, so they did not press charges against him. However, the NFL decided to suspend the player, claiming it found “substantial and persuasive evidence” of abuse from its own investigation. Elliott intends to appeal the decision, standing firm in his denial of the accusations.

Tiffany Thompson’s age is 22 and according to her Facebook page, she works as a “doll” at an Ohio Nightclub called Sway Columbus. She attended Pickering High School Central and her relationship status is set to “single.” The latest of Tiffany Thompson’s pictures on Facebook were posted in October 2016–nothing new has been made publicly visible since then. Since she is not a celebrity, there is limited information available about her at the moment, but as this case gains more publicity, new information may surface about Ezekiel Elliot’s ex-girlfriend.