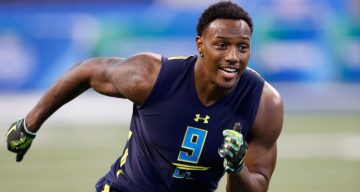 The NFL’s newest defensive end, Taco Charlton, has been signed with the Dallas Cowboys. He is full of energy and has the height to block his opponents. The 22-year-old was the 28th pick in the first round by the Dallas Cowboys in the 2017 NFL Draft. Here is everything you need to know from Taco Charlton’s wiki.

Happy birthday to my Queen!! If anybody knows me they know this lady means the world to me! Happy birthday Mom! Usually it's #TacoTuesday but today belongs to YOU

Born Vidauntae Taco Charlton on November 7, 1994 in Pickerington, Ohio, Taco stands tall at 6’ 6”. He went to Pickerington High School Central, where he found his love for football. As a senior, Taco had 19 sacks and 116 tackles. He is currently studying at the University of Michigan, where he plays for the school’s football team. Though Taco Charlton’s age is just 22, he was the 28th pick and drafted by the Cowboys.

"Always hated the boy, but now the boy the man, MF I done grown up" #AllGloryToGod for another year with my loved ones doing what I love to do! #ScorpioSZN

Happy birthday to my brotha and roommate @330jwilson ! *lord knows what I was smiling at*

The football player was nicknamed “Taco” as a child. Naturally, his friends assumed that the nickname stemmed from his love for tacos. Because of this, Taco Charlton avoided tacos. “Now,” he said, “I love tacos all the time, whether it’s Taco Bell or I go make my own tacos or whatever.” Do we smell a Taco Bell endorsement deal?

Taco Has a Promising Future

Just a kid from the east side of Columbus, Ohio. Now look where I'm at #AllGloryToGod

NFL.com’s Lance Zierlien is one of the many who believe that Taco has a lot of potential. During his senior season, Taco recorded at least one sack in seven of his final 10 games, including a 2.5-sack performance against arch-rivals, Ohio State Buckeyes during the Wolverines’ regular season.

About Taco, Zierlien said, “Charlton is an ascending prospect with the size, length, athleticism and pass-rushing potential that NFL general managers dream of. What you see today might not be what you get. While his production coming out of college will be modest, he could become a substantially better player as a pro if he’s committed to the weight room and willing to absorb coaching. High-impact defensive end with all-pro potential is his ceiling. His floor is solid starter.”

He’s from the Same Area as Former Teammate, Jake Butt

"Tatted on me but this sh*t is deeper than the surface!" Tell the city I'm coming… AND I'm bringing some savages with me! #BeatOhio

Taco Charlton and his former teammate, Jake Butt are both from the same area, but went to different high schools. They were roommates after arriving on campus and would often take the three and a half hour drive back to their hometown together. About Jake, Taco said, “We still knew each other and once we both committed we started to talk more than we did before. Once we got here we were as close as can be. That’s my brother right there. We’re super close.”