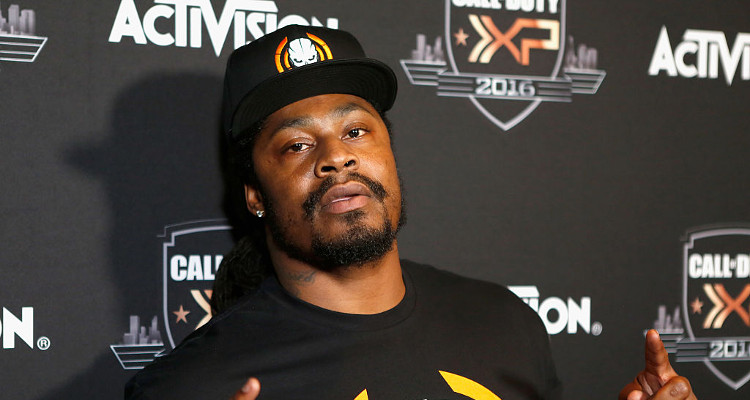 The wait is over! The Seattle Seahawks and the Oakland Raiders have agreed to trade running back, Marshawn Lynch. Nicknamed “Beast Mode,” Lynch expressed his joy of playing on his home team. To learn more about Beast Mode, take a look at our Marshawn Lynch Wiki!

NFL player, Marshawn Lynch was born on April 22, 1986 in Oakland, California. He was raised by his single mother, Denise, and he attended Oakland Technical High School with his three siblings. Lynch had a passion for football quite early in life, playing in a youth league as a child.

Lynch went to the University of California, Berkeley and majored in social welfare. While in college, he played for the California Golden Bears. On January 2, 2007, Lynch announced he would forgo his senior season and enter the 2007 NFL Draft.

On April 28, 2007, Lynch was selected by the Buffalo Bills as the 12th overall pick in the first round of the 2007 NFL Draft. The Bills signed him for $3.0 million and $10.285 million in total guarantees. He played with the Buffalo Bills for four seasons.

Next, Lynch signed with the Seattle Seahawks and stayed with them for six seasons. On February 7, 2016, during Super Bowl 50, Lynch announced his retirement via Twitter.

According sources, Marshawn Lynch has a net worth of $30.0 million.

Yesterday, Marshawn Lynch signed a two-year contract worth $8,500,000 with the Oakland Raiders, allowing him to come out of retirement. The deal includes an average annual salary of $4,250,000.

On Wednesday (April 26), the Raiders announced that they hired the formerly retired NFL player on a two-year deal. They made the trade with the Seattle Seahawks, with terms stating that the Raiders will get Lynch and a sixth-round draft choice in 2018 in exchange for Oakland’s fifth-round selection in the 2018 NFL Draft. However, the Seattle Seahawks still retain Lynch’s NFL rights.

Beast Mode announced that he’s signing with his hometown team in his signature style. Inspired by the rapper’s lyrics, Lynch made a Mozzy Reference and posted it to Twitter. It read, “Yes Lawd 12th man I’m thankful but shit just got REAL I had hella fun in Seattle… But I’m really from Oakland doe like really really really from Oakland doe… town bizzness breath on me. [sic]”

Lynch will be throwing a block party to celebrate his signing with the Raiders tonight (April 27).

Lynch is planning an autograph signing/block party in Oakland to celebrate on Thursday, as @clarencehilljr said

On passing the physical test, Lynch received his Raiders helmet and jersey, officially making him a Raiders player. It is also official that Marshawn Lynch’s jersey number is 24. Charles Woodson, the great “jersey no. 24” Raider has approved the jersey assignment.

In October 2006, then-Cal running back, Lynch decided to rejoice the team’s victory over the Washington Huskies by taking a spin on the Bears’ injury cart! The moment became historic, making Lynch one of the coolest football players ever.

Marshawn Lynch’s victory drive in the injury cart has become so iconic that there are even bobbleheads of it available on eBay!

The Marshawn bobblehead has arrived & can be yours on Nov. 5 at @CalFootball vs Washington!https://t.co/m60Z1YUQOt pic.twitter.com/p3oeypxbTx