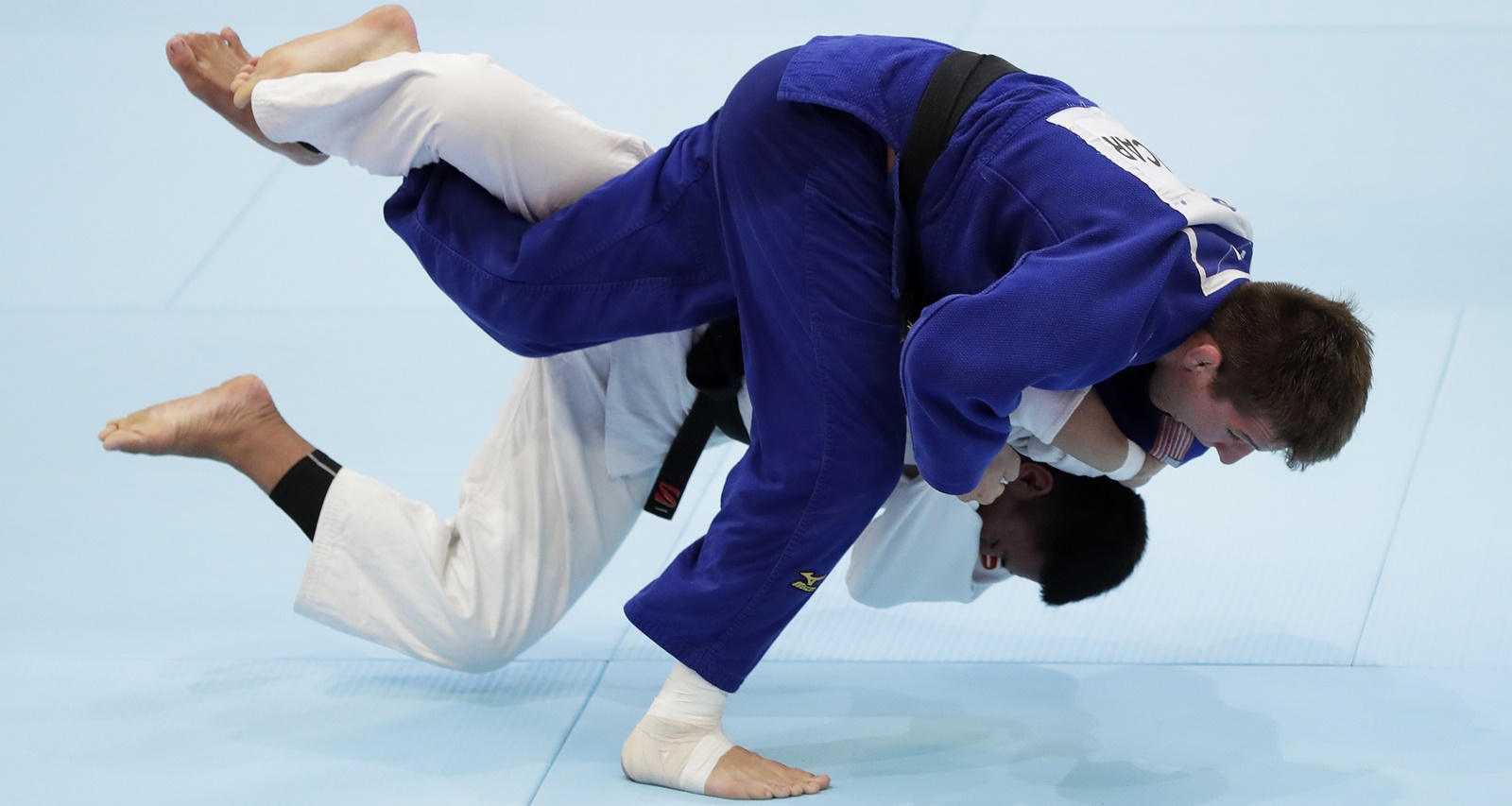 Jack Hatton (blue) of the United States compete in the Men's -81kg Pool C first round on day four of the World Judo Championships at the Nippon Budokan on August 28, 2019 in Tokyo, Japan. (Photo by Kiyoshi Ota/Getty Images)

The judo community is mourning the loss of a talented judoka, Jack Hatton, who passed away just days after his 24th birthday. Hatton was a talented judo practitioner and slated to compete in the 2020 Tokyo Olympics as part of Team USA. Beyond that, he was a dedicated teacher and mentor to younger judo talent. Our Jack Hatton wiki remembers this young athlete gone too soon.

Jack Hatton Was from New York

Jack Hatton was born on September 20, 1995 to Mark Hatton and his wife, Marie, in New York. Jack has an elder brother, Harrison Hatton.

The Hatton family is based in New York, where Jack grew up in Manhattan. He attended Burnt Hills-Ballston Lake High School and had studied business administration and management at DeVry University from 2017 to 2019.

At the time of his death, he was residing in Wakefield, Massachusetts, where he trained and taught at Pedro’s Judo.

His Father and Brother Inspired Him to Take up Judo

Mark Hatton, an experienced judoka with a second-degree black belt from the Kodokan, owns the Saratoga Judo, Inc. in New York. There, his sons, also black belt holders, assisted him.

As a young child, Jack was inspired by his judoka dad and brother. He began his own judo training at Oishi Judo when he was five, and later trained at Jason Morris Judo Center and San Jose State University.

Soon he was competing on the world stage at a global level, winning three junior U.S. Opens in a row. He also won a medal at the senior world championships when he was 17.

His skills brought him to Pedro’s Judo Center, where he trained with Team Force. Over the course of his career, he won more medals and was a training partner with the 2016 Olympic Team.

Hatton’s goal was the 2020 Olympics in Tokyo, and he was steadily moving up in the world rankings to qualify. Team Force had also set up a fundraiser to finance Hatton and his fellow judokas’ Olympic dreams.

The athlete was the co-founder of the athletic tape company Wrapbox, which launched in 2017. Aimed specifically towards the martial arts community, Wrapbox also promoted and supported athletes.

In April 2019, Wrapbox announced it would be one of the official sponsors of the New York Open Judo Championship.

Hatton Passed Away Four Days after His Birthday

The USA Judo team stated in a Facebook post on Wednesday that their team member, Jack Hatton, had passed away, only four days after his September 20 birthday, according to multiple news reports. He was 24 at the time at of his death.

Details about the cause of his death and any funeral arrangements haven’t been revealed. A GoFundMe page set up for his family has raised over $20,000 towards the $25,000 goal.

The judo community and other athletes reacted to his shocking death. But it was the aspiring athletes he taught and mentored whose grief was palpable.

It is with our deepest sorrow that we inform you of the untimely passing of one of our students, teammates, brothers, and friends, Jack Hatton. Jack has been a member of Pedro's Judo Center since 2015 and pursuing his dream of becoming a member of the 2020 Olympic Team. Along with being a top US Judo athlete, Jack was kind-hearted, caring and an all-around great person. He was a true role model for students at our dojo and judoka all over the country. He will be deeply missed by all of us at Pedro's Judo Center and the rest of the judo world. If you or a loved one is struggling with depression or their mental health, please seek help by calling 1-800-273-8255 or speak to someone. Service details will be shared once they are available for those wishing to pay their respects.

A few parents of kids who learned judo under Hatton expressed their sadness at this young mentor’s death. Many judo clubs have also shared their grief as well as their admiration for his Olympic aspirations and efforts on social media.

“He was kind, giving of his time and his interest, relatable, present. Imagine that, this young man so close to the pinnacle of the sport we come together to practice is just like us. Before he won, he lost constantly. But he persevered, he overcame, and he was climbing toward his dream,” read one judo club’s Facebook post about Hatton’s death. 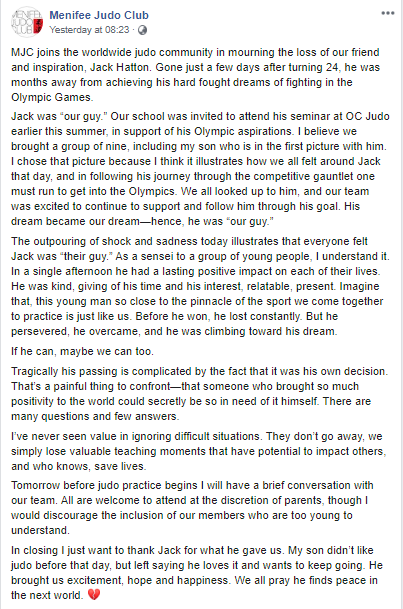 The post further read, “Tragically his passing is complicated by the fact that it was his own decision. That’s a painful thing to confront—that someone who brought so much positivity to the world could secretly be so in need of it himself. There are many questions and few answers.”

The tribute shared by Pedro’s Judo read, in part: “If you or a loved one is struggling with depression or their mental health, please seek help by calling 1-800-273-8255 or speak to someone.”

If you or someone you love has considered suicide, call the National Suicide Prevention Hotline at 1-800-273-8255.