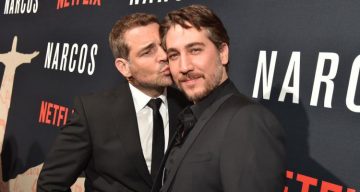 If you watched Pacho Herrera in Narcos season 3, you know that the drug lord was gay. Though not typically the first thing people associate with Herrera, fans want to know if the real Helmer Herrera was gay. Find out everything you need to know with our Pacho Herrera wiki.

Narcos season 3 got hotter, heavier, and bloodier than we have ever seen! Before anyone could say “hola,” we saw Pacho Herrera dancing and getting close with another man, before brutally killing Claudio Salazar in one of the most gruesome deaths of the series. But among the drama and massacre, people are interested to know if the real Pacho Herrera of the Cali Cartel was really gay. In reality, Herrera was one of the key players in the cartel, and we have all the details about him in our Helmer “Pacho” Herrera wiki, right here!

Francisco Helmer Herrera Buitrago, a.k.a Pacho Herrera, was born on August 24, 1951, in Palmira, Colombia. He studied technical maintenance in high school, which is how he could get a job in the United States. While in the U.S., Helmer learned the art of precious metals and became a jeweler. No harm in that! But soon enough, he began his journey into the drug world. It was the “decade of drugs,” and all people wanted to do was cash in on the demand. Herrera was among those who supplied drugs and hallucinogens to people on the streets of New York. The narcotics department was swift in arresting the drug trafficker twice (once in 1975 and again in 1978), but that did not stop Herrera.

He went to a Cali, Columbia cartel to negotiate a drug deal with them in 1983. He wanted distribution rights for NYC and offered to give the Cali Cartel a trafficking route through Mexico, one that he had already established. An offer they couldn’t resist, Herrera came to be known as “Pacho” and was a part of one of the biggest organized crimes of all time. He soon became the Cali Cartel’s kingpin for cities like Palmira.

Pacho Herrera became very rich, very fast and was known to live a luxurious lifestyle. He had a 14-storey office, a penthouse bathtub, an armada of 70 cars, bodyguards, bullet-proof vehicles, weapons of the newest technology; the works! Herrera appointed guerrilla forces to protect his secret hash labs, and was documented to have hired Fuerzas Armadas Revolucionarias de Colombia (FARC) as protection. Talk about being king!

But Herrera always maintained a low profile and was never in the eyes or books of any interviewer, so he almost wasn’t even mentioned as a member of the Cali Cartel. It was believed that Herrera’s money and power were behind Colombian president Ernesto Samper’s campaign.

The End of the Herrera Reign

Pacho Herrera was in a stadium when 20 gunmen dressed as police officers opened fire, killing 18. But it was Herrera’s lucky day, and he survived. However, the narcotics department in New York was not one to keep mum while Herrera continued to earn more drug money. They targeted his operations in NYC and wire tapped cell phones leading to the arrest of 100 traffickers, seizing 2.5 tons of cocaine along with $20.0 million cash and assets. Computers that were taken provided details into the Cali Cartel, and helped the DEA with further investigations.

It wasn’t long after that Herrera knocked on the Colombian National Police doors to surrender. He was the last to be captured among the seven major cartel players, and in 1996, was put behind bars. Surprisingly, he was sentenced to only six years and eight months in high-security prison for drug trafficking. Herrera’s sentence was later increased to 14 years in 1998. He changed his lifestyle while behind bars. A soccer fan since childhood, he began organizing soccer games within the prison yard. He sponsored tournaments, and though it was maximum security, he would meet people in other wings.

But then, a man named Rafael Angel Uribe Serna came into the prison during a soccer game and Herrera greeted him with a hug. That was when Serna took out a pistol and shot Herrera six times in the head! Serna was taken into custody immediately. Whether Serna was taking vengeance from the previous Medellin Cartel, the communist guerrillas, or Wilber Varela, a victim of the Cali Cartel’s assassinations, is not known. Whatever the reason behind Pacho Herrera’s death, Serna put an end to a legend in crime.

In the book, Patroness of Pablo Escobar, a Colombian journalist wrote that Pacho Herrera was “an immigrant who went from being an anonymous Latin mechanic to one of the most wealthy members of the Cartel de Cali.” He goes on to reveal that the drug lord was “one of the few homosexuals who climbed high in the patibularia pyramid of the Mafia.”

There are many other publications that depict Herrera as openly gay, despite the stigma that likely surrounded him because of it. Though not often spoken about (given the fact that his crimes overshadow his sexual orientation), it is believed that Pacho Herrera in Narcos is very likely accurately portrayed.