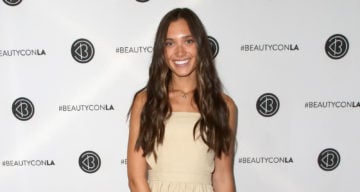 In a social media influencer scene saturated with #ModelLife, Hannah Meloche stands out. One of the reigning flock of Dote Girls, together with her “Girdies” Ellie Thumann and Emma Chamberlain on YouTube, Hannah has built a followership on social media like no other. She caught attention because of her unique pair of eyes. If you haven’t checked out this rising YouTube star, our Hannah Meloche wiki will give you reason to.

Hannah Meloche was born on February 26, 2001 and turned 18 years old this year. She hails from Grand Rapids, Michigan where she attended Forest Hills Central High School.

Hannah is a model, aspiring entertainer, and social media influencer who caught the online community’s attention with her different-colored eyes. It’s hard to tell Hannah’s exact eye color, but one is visibly lighter than the other.

She’s the eldest of five children born to Nicole Gregory and Andrew Meloche. It appears that her parents are separated and she lives with her mother and visits her father often.

At Forest Hills Central, Hannah played lacrosse. She’s set to graduate soon and is heading to college. Judging from her recent YouTube vlogs, she’s looking at colleges in California.

Hannah commutes between Los Angeles and Michigan for her modeling jobs and has traveled to other parts of the country, too. In a recent blog post on her website, she writes that she and her family visited all 50 states before she turned 18.

Hannah always loved being in front of the camera as a child. She often dressed up and took pictures on her mom’s phone. When she discovered the video function on her mom’s phone, she taught herself to shoot videos and edit them.

When she was 12, she was gifted her first real camera on Christmas. She started recording videos of her own, editing them, and when she was 13, she began uploading them on YouTube on her self-titled channel in 2013.

A year later, her younger sister, Ella Meloche, joined her on the platform. They had a joint channel, Meloche Sisters, which they began in 2014.

The Meloche sisters were becoming increasingly popular on YouTube. However, sometime in 2017, Ella was MIA in their videos. A while later, Hannah renamed the channel “Hannah Meloche Vlogs.”

The move, of course, raised questions among their fans. But Hannah clarified in an October 2017 video that it was nothing alarming.

Hannah said that Ella had contracted mono over the summer and didn’t vlog while she focused on recovering. When she recovered, however, Ella decided she didn’t want to be a vlogger anymore.

Sixteen-year-old Ella has since focused on her modeling career, while Hannah continues to pursue her social media and entertainment career aspirations.

Hannah and Ella have three brothers, Andrew Jr. and twins Jack and Reeve. The Meloche boys have featured in Hannah’s YouTube videos and also have their own channel, The JAR bros.

Her YouTube Channel Opened Up Several Opportunities for Her

She posts a variety of fashion, beauty, lifestyle, traveling, and entertainment videos. Initially, she recreated Instagram and Pinterest looks. The channel she had with her sister reveals more about the Meloche family, from their trips to holidays.

Her popularity is obvious not only from her massive followership, but also her ability to parlay her fame into a lucrative career. Her main YouTube channel earns her anywhere between $16,000 and $260,000 annually. Hannah Meloche Vlogs brings in an estimated $14,000 to $230,000.

She and her fellow Girdies have also inked Instagram sponsorship deals. Her endorsement deals see her earning an estimated $3,000 to $5,000 per post.

It’s helped her expand her brand with a jewelry line and official merchandise as well.

Hannah, whose goal is to get into the film industry, credits the online platform for opening up business opportunities for her. Her burgeoning popularity got her in contact with various film companies in Michigan who have aided her ambitions.

She was given the opportunity to shadow a worker for a day and learn plenty from the experience. “Obviously they wouldn’t have talked to me [otherwise] because that’s where all my work is,” she said.

Hannah is also aware that online content can be misinterpreted. So she always rechecks her content before posting to ensure that her millions of followers don’t misunderstand anything and she has no regrets about what she puts out.

She Has a Boyfriend

Much to many fans’ chagrin, Hannah Meloche is off the market. She’s dating a fellow lacrosse player, Jacob Hoexum, who attended Forest Hills Eastern High School.

Jacob has appeared in Hannah’s videos often, including the customary Boyfriend Tag. He also joined her family on their recent trip to Hawaii.

He’s currently a student at John Carroll University in Ohio where he plays lacrosse. Hannah once filmed her five-hour road trip to visit her boyfriend in college.