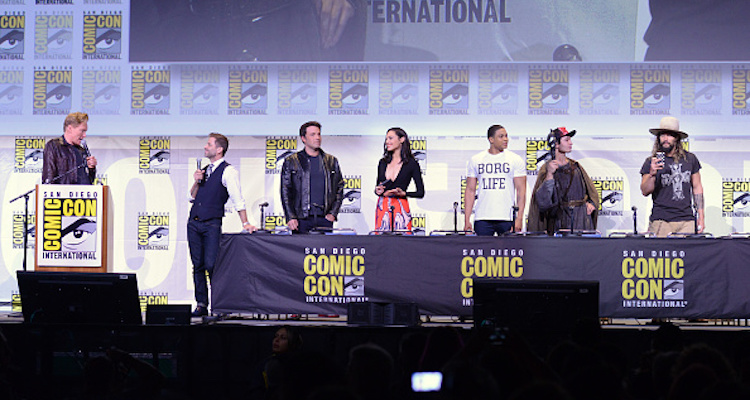 Earth’s greatest heroes are closer than you think and the latest Justice League teasers are here to remind fans that DC Comics isn’t going anywhere. The latest “Unite the League” teasers have made their online debut, as well as a few Justice League posters.

If you haven’t seen the latest Justice League trailers, then do it now! If the latest trailers are any indication of what’s to come, then DC fans won’t be disappointed. The DC Cinematic Universe has been crushed by Marvel for what feels like forever. And after the commercial success of Batman vs. Superman and Suicide Squad, it seems that the franchise is clawing its way up to the top.

To promote the new Justice League movie, the studio put out three sneak peeks, based on the characters of Batman (Ben Affleck), Aquaman (Jason Momoa), and The Flash (Ezra Miller). The clips are short but worth every second, giving DC fans everywhere a taste of what’s to come in November, when the film is released.  The short clips start off with each hero’s symbol and continues with an action sequence. So far, there haven’t been any separate trailers for Wonder Woman (Gal Gadot), Cyborg (Ray Fisher), or Superman (Henry Cavill).

On Saturday March 23, a new trailer will be released released and will include all of the Justice League members. The previous sneak peeks have been building up to the moment where a new trailer will be unveiled to the world, showing more footage of the upcoming blockbuster action film. A teaser can go a long way and fans often use them as a way to figure out what will happen in the plot, while others have complained that too many teasers spoil the movie.

The official movie synopsis reads: “Fueled by his restored faith in humanity and inspired by Superman’s selfless act, Bruce Wayne enlists the help of his newfound ally, Diana Prince, to face an even greater enemy. Together, Batman and Wonder Woman work quickly to find and recruit a team of metahumans to stand against this newly awakened threat. But despite the formation of this unprecedented league of heroes—Batman, Wonder Woman, Aquaman, Cyborg and The Flash—it may already be too late to save the planet from an assault of catastrophic proportions.”

The arrival of the Justice League was first touched on in Batman vs. Superman, when Batman, Superman and Wonder Woman fought to destroy Doomsday (the scientific mutation of General Zod) and defeat Lex Luthor. For those who need a refresher course, the movie showed brief clips of Lex’s files on each member and a display of their powers—on camera! At the end of the movie, during Clark Kent’s funeral in Smallville, Bruce talks to Diana in the distance about assembling a team. The idea comes after he has a dream where The Flash travels through time to warn him about a threat, with Lois Lane being the key. Many believe that it wasn’t really a dream at all, but a vision—after all, Bruce didn’t even know The Flash existed!

Then there’s the post-credits scene in Suicide Squad, where Bruce is talking to ARGUS director, Amanda Waller (who knows Batman’s secret identity—oh snap!) about obtaining files on metahumans to prepare for a battle. The scene is a nod to the future members of the Justice League being recruited by Bruce and Diana.

Be sure to watch the latest full-length trailer on YouTube on Saturday March 23 and Justice League when it hits theaters on November 17, 2017.