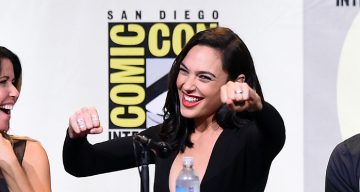 Gal Gadot is a picture of grace and power, as she stops bullets with her bracelets in the new Wonder Woman trailer! But not everyone is on board with her being cast as the heroic amazon Princess; the film was recently banned in Lebanon, as per the Lebanese government! Naturally, people are looking to learn more about the Israeli actress, so here is everything you need to know about her in our Gal Gadot wiki!

Gal Gadot is giving male superheroes a run for their money as the Amazonian warrior princess, Wonder Woman. She gave a preview of the upcoming Wonder Woman movie from the DC Comics Universe by announcing the new trailer on her Twitter. The movie is bound to be epic with the actress already creating a buzz since appearing as Wonder Woman in Batman v Superman: Dawn of Justice (2016). Fans want to know about her husband, kids, and her net worth. We’ve got all the information you need and more, right here in our Gal Gadot wiki.

✨ Power. Grace. Wisdom. Wonder. ✨ So excited to share this with you – our NEW trailer for #WonderWoman! pic.twitter.com/qril3IBBVp

1) She is the Second Highest-Earning Israeli Model

The Israeli model and actress has a net worth estimated to be around $10.0 million. She’s a very successful model, and is ranked by Forbes as the second highest-earning model from Israel, right after Bar Rafaeli. She also co-owned a hotel with her husband in Tel Aviv, which they sold in 2015 for $26.0 million.

Besides acting, she’s also the face of Gucci’s Bamboo fragrance brand, and is the leading model for Castro clothing company in Israel. She has endorsements for Vine Vera, Jaguar, Huawei smartphones, and Miss Sixty.

The 31-year-old can be seen riding a motorcycle in Wonder Woman and in real life, too! She owns a black 2006 Ducati Monster-SRS priced around $8000. Her penchant for bikes earned her the role of Gisele Yashar in the Fast and Furious franchise.

2) She Served in the Israeli Army!

When she was 20, Gadot enlisted in the Israel Defense Forces to complete her mandatory military service. About her time in the military, Gadot said to Glamour, “Let me start by saying, I wish no country had the need for an army. But in Israel serving is part of being an Israeli. You’ve got to give back to the state. You give two or three years, and it’s not about you. You give your freedom away. You learn discipline and respect.”

She went through grueling weapons and combat training for three months and served as a combat trainer. Her weapon expertise and passion for bikes were what caught the eye of the Fast and Furious director, Justin Lin.

However, it seems her serving in the Israeli military is what got her movie banned in Lebanon! According to The Hollywood Reporter, Gal Gadot’s Wonderwoman has been removed from all theaters in Lebanon because of her previous service with the Israeli Defense Force.

Since Israel and Lebanon are technically still at war with one another, it directly affected the Lebanese Ministry of Economy’s decision to ban Wonder Woman from the country.

In real life, Gadot is just as graceful and powerful as her Wonder Woman character. She was crowned Miss Israel at the age of 18, and represented her country in the 2004 Miss Universe pageant. The pageants opened up avenues for her modeling career.

The 5’10” model had always wanted to be a choreographer, but studied law after leaving the army. When she had completed her first year of law school, she had been called to audition for the leading lady’s role in Quantum of Solace, but lost the role to Olga Kurylenko. Coincidentally, she beat Kurylenko for the role of Wonder Woman.

In 2008, while Gadot was filming for her first Fast & Furious movie, she tied the knot with her long-time boyfriend, Yaron Varsano. Varsano is a real estate developer from Israel. The couple has a four-year-old daughter named Alma Varsano.

Varsano owned a posh five-star hotel in Tel Aviv, Israel’s popular coast town. Gadot was the co-owner of the fancy Varsano hotel before selling it to Russian businessman, Roman Abramovich for $26.0 million.

5) She’s a Symbol of Women Empowerment

In 2016, The United Nations named the two Wonder Women, Gadot, and 65-year-old Lynda Carter, as Honorary Ambassadors for the Empowerment of Women and Girls. Gadot advocates for more female superheroes and aspires to be a role model for girls everywhere.

Was looking forward to finally meeting the woman who first embodied the character that I LOVE. @RealLyndaCarter is such an AMAZING woman! ❤️ pic.twitter.com/TY1Z1U6Xlw

Gadot is the first non-American to play Wonder Woman, and when she was announced for the role of the character, DC Comics fans were critical. Not because of Gal Gadot’s ethnicity, but because they felt she was too skinny for the curvaceous Amazonian superhero! But Gadot took the criticism like a pro and silenced her critics by proclaiming that her concern wasn’t about Wonder Woman’s appearance, but rather the preparation to play the warrior princess, which was her ultimate focus.

Nevertheless, she’s proved herself to be an impressive Wonder Woman by undergoing intensive training of swordsmanship, Kung Fu kickboxing, capoeira, and Brazilian jiu-jitsu. In the character’s first appearance in the film Batman v Superman: Dawn of Justice, Gadot was praised for her performance. She certainly bulked up for the role, too, admitting it’s impressive even to her to see how far she’s come in terms of her strength!

Gal Gadot’s Wonder Woman is set to release in June 2017, and she will reprise the character for the next DC Comic movie, Justice League, which is also slated to be released next year. In the meantime, watch her repel bullets with her bracelets in the new Wonder Woman trailer!