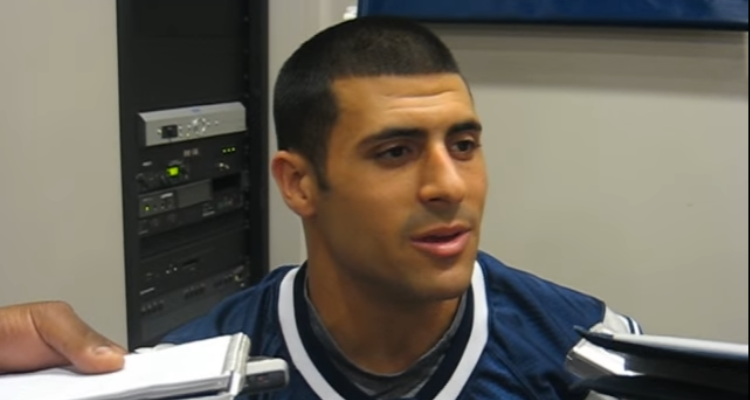 Former NFL star, Aaron Hernandez was found dead in his prison cell on Wednesday. Officials say the former New England Patriots tight end hanged himself, the same day his ex-teammates were to visit the White House after their victory in the Super Bowl. If you want to know some facts about Aaron Hernandez’s brother, we’ve got details in our DJ Hernandez wiki.

The news came as a shock, as the 27-year-old athlete was acquitted in a second murder case less than a week ago. About the incident, Bristol County District Attorney Thomas Quinn said, it was “a shocking and sad end to a very tragic series of events that has negatively impacted a number of families.” Quinn originally persecuted Hernandez in the Lloyd case of June 2013.

The sudden news has made people wonder who Aaron Hernandez’ family is, but since they are not celebrities, very little information is available on them. What is known is that Aaron Hernandez’ parents are his mother, Terri and his father, Dennis, who died of complications from hernia surgery when the athlete was 16. It’s hard imagine the turmoil Aaron Hernandez’s mom and brother are currently going through at this time.

The athlete’s brother, DJ, also known as Jonathan, must have had a love for football in his veins. He originally worked as an assistant coach to a lower-level Iowa football team. DJ Hernandez’s Iowa career was halted by his own doing, reportedly due to the aftermath of his brother’s conviction, according to Black Heart Gold Pants. DJ left his role to take on project management for New View Roofing and Remodeling in Dallas, but the former coach and athlete could not stay away from the field for long.

His New Role as a High School Coach

As of late January, DJ has become the new head coach at Connecticut’s Ledyard High School. About the opportunity, DJ said, “I know (Ledyard) wants stability and someone who can go in and motivate and challenge these students. I’m excited about the challenge. I’m going to make sure the guys understand that they can’t achieve unless they work hard, and smart, throughout the process. I want to be a positive role model and a mentor … that’s what it’s all about.”

Before DJ could be accepted, the school did extensive background work and interviews leading up to it, but the school’s Athletic Director and Assistant Principal, Jim Buonocore was confident in DJ’s potential. “Jonathan is a leader. He’s an educator. He’s a tremendous football coach. I think we’re privileged to get him in this community,” he said. He went on to express his confidence in DJ’s ability to overcome obstacles, and make a positive impact on all the students.

As for his social media accounts? Many have been searching for DJ Hernandez’s Instagram and DJ Hernandez’s Twitter account, but to no avail. Either he doesn’t use social media, or he’s laying low from the spotlight as much as he can.