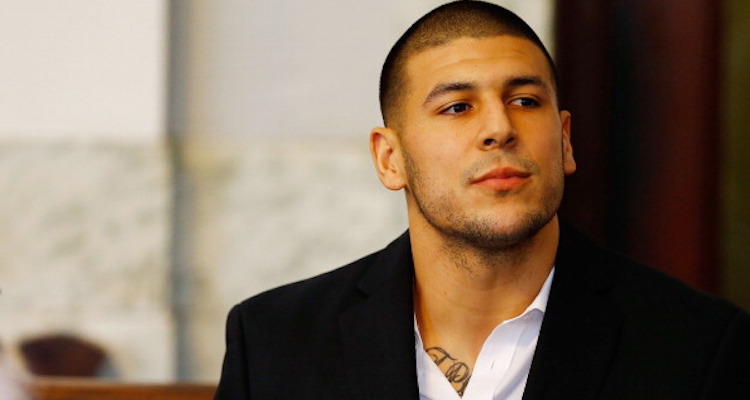 Aaron Hernandez’s NFL career ended when he was arrested on murder charges. Days after he was acquitted of double homicide, he committed suicide on April 19, 2017. His conviction was dismissed making him an innocent man at the time of his death. The rise and fall of this promising NFL player was documented in Oxygen’s Aaron Hernandez Uncovered. Delve into this former footballer’s downfall in our Aaron Hernandez wiki.

Who Is Aaron Hernandez?

Aaron Hernandez was born on November 6, 1989, making his age 27 at the time of his death. His father, Dennis Hernandez, was of Puerto Rican descent, while his mother, Terri Valentine-Hernandez, who was of Italian descent.

He is survived by a brother named D.J.

His father died in 2006 from complications from hernia surgery when Aaron was just 16 years old. He grew up in Bristol, Connecticut, where he had a rough and abusive childhood.

In the city, Aaron was surrounded by a rough crowd of kids, who were petty criminals. His circle of friends included low-level criminals, but he had something they didn’t: a lifesaver in the form of a promising football career.

In high school, he held several state and national records. At 17 years old, Aaron was allowed to graduate high school early and became a football recruit for the University of Florida.

Aaron Hernandez’s stats described him as a 6’1” tight end for the New England Patriots. Within a few years of being signed by the team, he was one their star players and signed a five-year, $40.0 million contract extension in 2012. Rightly so, as he was responsible for 175 passes for 18 touchdowns.

His net worth at the time of his death was estimated at $8.0 million, and he bought a large home in suburban Massachusetts. Latest estimates put his net worth at $50,000.

When he was arrested in 2013, the Patriots released him from the contract. It is estimated that he lost around $19.3 million in unpaid salary.

Before Aaron Hernandez’s death, he was serving a life sentence (without the possibility of parole). He was convicted of first-degree murder for the widely publicized June 2013 killing of semi-professional football player, Odin Lloyd.

Nine days later, Hernandez was charged with the murder and he was released from the Patriots.

Less than a week before his death, he was facing double homicide charges. In 2012, Hernandez allegedly killed Safiro Furtado and Daniel de Abreu in a drive-by shooting outside of a Boston nightclub.

He was found “not guilty” of the double murder in that case, however, he was convicted of the illegal possession of a firearm. But he was still serving his sentence for Lloyd’s murder.

The Aftermath of Aaron Hernandez’s Death

Aaron Hernandez was found dead on Wednesday in his Massachusetts prison cell. The former Patriots star hanged himself with a bed sheet attached to a window in his cell, located at the Souza Baranowski prison in Shirley, Massachusetts. According to the Massachusetts Department of Corrections, his body was discovered at 3:05 a.m. EST.

The cause of death was ruled as suicide. After his death, a court vacated his murder conviction for Lloyd’s death. After the ruling, the late Hernandez returned to being innocent until (re)proven guilty.

Hernandez’s fiancée, Shayanna Jenkins was his high school sweetheart and they grew up in Bristol together. They were engaged soon after their daughter, Avielle was born. The family of three lived in a $1.3 million mansion in Massachusetts.

According to the reports, Shayanna was told by Hernandez to move a box from their house, a day after Lloyd’s body was found. She also said Hernandez gave her a phone call from the police station and asked her to give money to a guy named Ernest Wallace, one of the men who would be charged for the killing.

After Hernandez’s death, Jenkins and the Aaron Hernandez estate are embattled with wrongful death lawsuits. The Patriots may have to pay Jenkins and her daughter the salary they owed to Hernandez before his conviction was vacated.