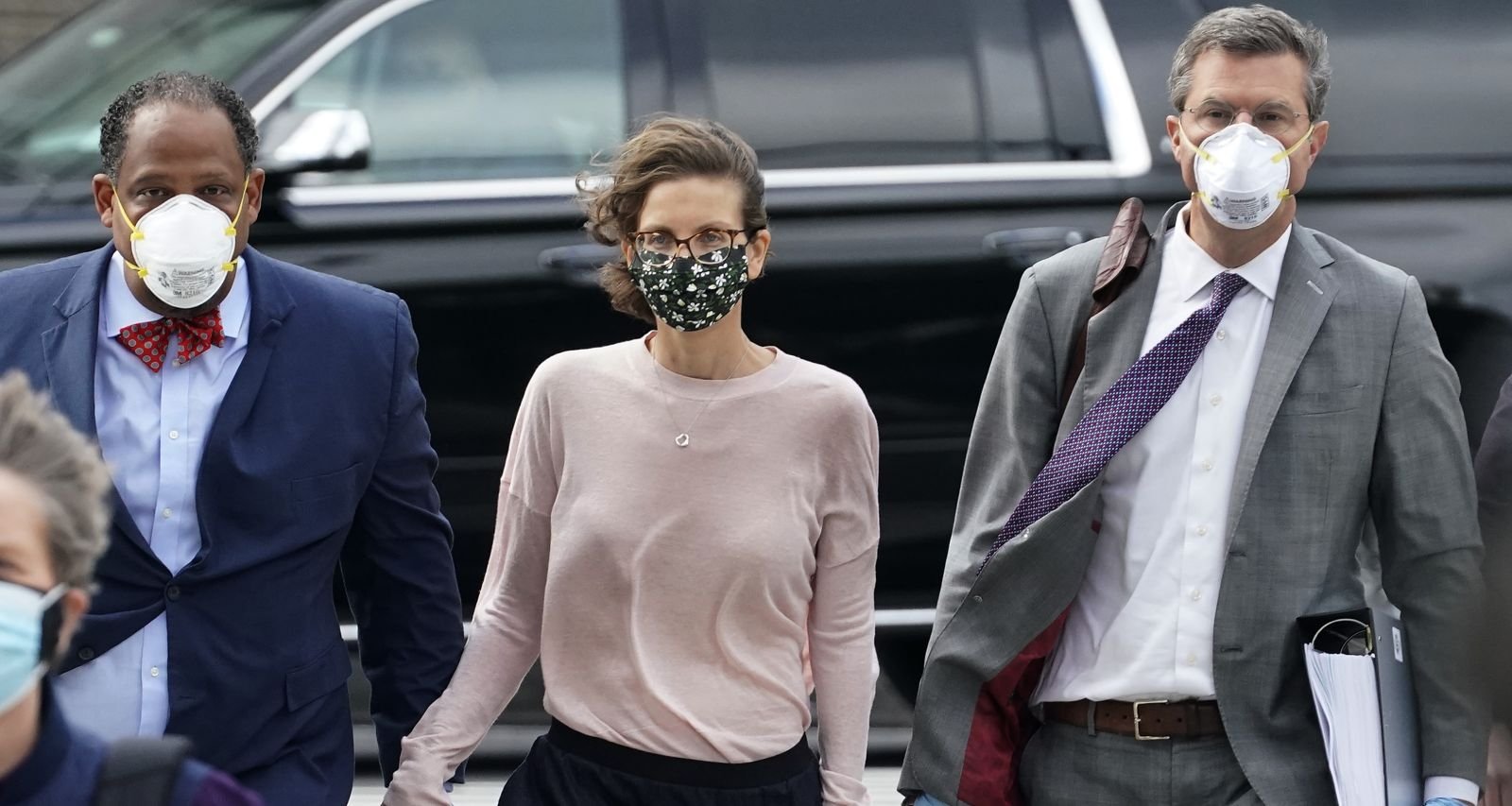 Clare Bronfman arrives at US District court in Brooklyn on September 30, 2020 (Photo by TIMOTHY A. CLARY/AFP via Getty Images)

Clare Bronfman, the Seagram heiress, was sentenced to prison for her role in the NXIVM sex cult scandal. Clare is the youngest daughter of billionaire Edgar Bronfman Sr., the late chairman of the Seagram liquor empire. Despite her legal troubles, the heiress is far from broke. Clare Bronfman’s net worth is estimated at $200.0 million, which is still a comfortable portion of the $500.0 million net worth she had when the scandal broke out. Court documents suggest Bronfman’s sizeable wealth went towards funding the NXIVM ringleader Keith Raniere’s lifestyle, which we detail here.

Clare Bronfman was born in 1979 to Edgar Bronfman Sr. and his third (and fourth) wife, Rita Webb, aka Georgiana. Clare has an older sister, Sara, who was also involved in NXIVM. The sisters were the youngest of Edgar Sr.’s seven children and reportedly didn’t have a close bond with their father.

Clare and Sara became involved in NXIVM in late 2002, early 2003. Back then, it appeared as a multi-level marketing business under a man named Keith Raniere. The sisters attended the group’s workshops and moved up the ranks to become a part of Raniere’s inner circle.

The sisters also introduced their father to NXIVM at a time when he apparently was eager to get closer to them. The workshops reportedly cost $10,000 each, at minimum. But Edgar would break away from the group when he found out about his daughters’ extravagant expenditures on Raniere.

The Seagram patriarch was reportedly upset that Clare had given Raniere a $2.0 million loan at 2.5% interest. A Forbes feature on Raniere would quote Edgar as calling NXIVM a “cult.” Raniere would also blame Clare for the group’s negative publicity as a result of her telling her father about the loan.


Clare’s hefty inheritance had put her net worth at $500.0 million. Not surprising, considering Edgar and his brother, Charles Bronfman, were worth well over $2.0 billion each.

However, friends and family of Clare and Sara Bronfman would allege that the heiresses gutted their inheritance and trust funds when they reportedly spent $150.0 million on NXIVM operations. The sisters also took measures to conceal their spending from the family trustees, per reports.

Clare further burned bridges with her father by allowing NXIVM members to access his email accounts and hiring private investigators to dig up dirt on perceived enemies of NXIVM.

Edgar Bronfman Sr. passed away in 2013. But before that, his youngest daughters had exhausted so much of their financial resources on Raniere that they were forced to ask for a loan out of their trusts, which they would inherit only upon Edgar’s death.

Edgar had set provisions for his children to get a loan from their trusts against the assets of their father’s master trust. The sisters were able to use this condition to get $60.0 million, which they failed to repay.

After the NXIVM scandal reached its peak with the 2018 arrests of Raniere and actress, Allison Mack, Clare was also arrested and charged for her involvement in the alleged sex trafficking ring. Clare’s sizeable bail and legal expenses among other things would bring her net worth down to $200.0 million by the latest estimates.

NXIVM had been a subject of scrutiny since Edgar Bronfman Sr. called it a cult in 2003. Before his arrest in 2018, Raniere was still proclaiming to be the leader of an executive coaching organization, and Clare and Sara Bronfman were his major contributors.

Raniere allegedly convinced Clare that the only way to purify her family’s “evil” money was to spend it on the good things done by NXIVM. Those who were worried about the sisters noted the staggering dollars they funneled into Raniere’s control and NXIVM. Legal documents claimed the figure Clare invested in Raniere totaled $150.0 million.

They reportedly used $66.0 million of their inheritance to cover Raniere’s losses in the commodities market. Other alleged shocking contributions towards Raniere include $30.0 million to buy real estate in Los Angeles and around Albany, $11.0 million towards a 22-seat private jet, and millions more to settle lawsuits with NXIVM’s enemies.

Raniere introduced the sisters to an asset management firm run by one of his girlfriends, now an ex. The firm managed Clare and Sara’s books and accounts, making sizable payments to NXIVM cohorts from the Bronfmans’ accounts.

Those expenses were not limited to Raniere alone. They would also go to Nancy Salzman, his right hand and president of NXIVM.

According to one report, $1.0 million to buy and refurbish Salzman’s house in Halfmoon came from the Bronfman family. Clare would pay $2.3 million for a 234-acre horse farm outside Albany that the group would use, and Sara would buy a $6.5 million apartment in the Trump Tower in Manhattan that Salzman would use. They would also “lend” about $1.7 million to buy NXIVM’s headquarters.

Formerly a winning equestrian, Clare would sell her $7.0 million equestrian facility in Pennsylvania and most of her horses to devote herself completely to NXIVM.

Clare Bronfman and her sister accused former NXIVM members of extortion in court when prosecutors unraveled the trafficking activities within the organization. As the accusations against NXIVM grew, Clare and Sara’s troubles mounted.

After an FBI investigation, its leadership was arrested in 2018. That included Raniere, Salzman, Mack, and Clare Bronfman.

Clare Bronfman was charged with money laundering and identity theft in connection with NXIVM activities. She pleaded not guilty and was released on a $100.0 million bond, which Clare was able to meet easily thanks to her massive fortune.

The bond was secured by $25.0 million in cash from one of Clare’s trust funds and $25.0 million in real estate, including her private island, Wakaya. Clare had bought the island of Wakaya off the coast of Fiji for $47.0 million in 2016 and reportedly was developing a resort there for NXIVM members.

The island was allegedly a safe haven for the NXIVM leadership to escape prosecution. But authorities deemed Clare a flight risk who could escape to her private island after posting bail, and therefore put her under house arrest in the U.S.

Clare also set up a defense fund to fight for Raniere, herself, and other arrested NXIVM members. The trust is reportedly worth $14.0 million.

Clare pleaded guilty to conspiracy to conceal and harbor illegal aliens for financial gain and fraudulent use of identification in 2019. Clare Bronfman was sentenced to 81 months in prison for her role in NXIVM in September 2020.