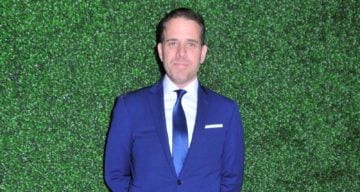 Hunter Biden was dishonorably discharged from the US Navy.

In the first presidential debate between President Donald Trump and Democratic candidate, Joe Biden, Trump took jabs at Biden’s son, Hunter. The former vice president’s son, Hunter Biden, had a brief naval career before his discharge in 2014. President Trump claimed that Hunter Biden was dishonorably discharged as an addict. While Biden refuted that claim, it didn’t stop Trump from repeating one of his many disproven claims about Joe Biden’s living son. This isn’t the first time Hunter Biden has been the subject of a debunked conspiracy theory, which we disprove here.

Hunter Biden Was Not Dishonorably Discharged

Joe Biden’s son, Beau Biden, was a member of the National Guard and served in Iraq. His military service would be an oft-mentioned subject when Biden was President Barack Obama’s running mate. Beau Biden would pass away in 2015 after suffering from a brain tumor.

A couple of years before his death, Beau’s younger brother Hunter Biden’s application for the U.S. Navy Reserve was accepted in 2013. Born on February 4, 1970, Hunter was 43 then.

He was accepted as part of a program that allows a limited number of applicants with desirable skills to serve in staff positions. Hunter received waivers for his age and a past drug-related incident, and was sworn in as a direct commission officer by his father, then-Vice President Joe Biden, at the White House.

Hunter’s naval career was short-lived when he tested positive for cocaine use the following month. He had been open about his years-long struggle with drugs and alcohol addiction before that.

He claimed that some cigarettes he had accepted from other smokers were laced with cocaine, which showed up in a urinalysis test. He decided not to appeal against it as, given his past drug abuse, it was unlikely a panel would believe his explanation.

Thus, Hunter Biden was administratively discharged. The news of his discharge would be reported in 2014 when an anonymous Navy source tipped off The Wall Street Journal.

A “dishonorable discharge” usually follows a court martial hearing. A court martial is the equivalent of a felony conviction, and there are no reports of Hunter Biden ever being in such a hearing.

An “administrative discharge” is a broad term for when the individual is let go by the military before they have completed a set number of days in service. While it’s unlikely that Hunter got an “honorable discharge,” many conclude he might have received a “general discharge.” Military records aren’t public, so this can’t be verified without an official source.

Back in 2014, however, Hunter Biden did acknowledge his discharge from the Navy Reserve with a statement through his lawyer.

“It was the honor of my life to serve in the U.S. Navy, and I deeply regret and am embarrassed that my actions led to my administrative discharge,” Biden’s statement read. “I respect the Navy’s decision. With the love and support of my family, I’m moving forward.”

President Trump has been accused of disparaging the troops, which Joe Biden referenced in the first presidential debate by bringing up his son Beau’s service. Trump avoided touching on Biden’s deceased son and went for Hunter instead.

Media outlets have reiterated Biden’s rebuttal from the debate that Hunter Biden was not dishonorably discharged. He also reportedly overcame his drug addiction.