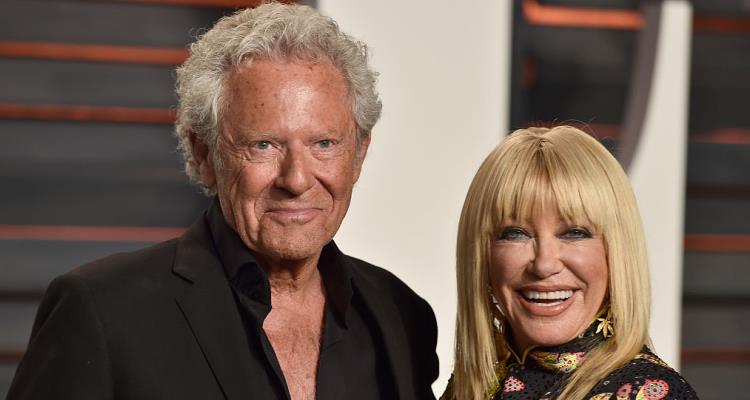 Who is Suzanne Somers married to? That’s what people are asking after the Three’s Company alum made a tragic revelation. Now, everyone is wondering about Suzanne Somers’ husband. Learn more about Somers’ secret and husband, with our Alan Hamel wiki!

Who is Alan Hamel?

Alan Hamel’s age is 81 and he is a Canadian producer, entertainer, and television host with a reported net worth of $100.0 million. He was born on June 30, 1936, in Toronto and attended Ryerson University. Suzanne Somers and Alan Hamel have been married since 1977. Alan Hamel’s kids are Stephen and Leslie from a previous relationship.

In Somers’ new book, Two’s Company: A Fifty-Year Romance with Lessons Learned in Love, Life & Business, she described the fear she felt on a shoot in Mexico in the ‘70s. According to Somers, an intoxicated man who was working as a waiter offered her some weed and tried to kiss her.

“He fell all over me, and I ran into the house,” she said. “I was alone with this creepy guy and I thought, ‘There’s no one here who cares about me, if I run to the ocean what’s going to happen to me down there?’ I hid in the house and he’s going ‘Suzanne.’ It’s like a horror movie, ‘Suzanne.’”

She thought she was going to be raped or killed and felt powerless, according to an excerpt from her book.

“I’m thinking, ‘I am just so going to get raped, or killed,’” she said. “I had no power at all.” Luckily, a few men from the photo shoot she’d been working on arrived back at the hotel they were all staying at, and fortunately, the creepy man left her alone.

“When I woke up in the morning I [was] being photographed by photographer guy,” she added. “He’s telling me, ‘Oh, you’re so beautiful, you look so beautiful, and I shoot for Playboy, you have a good body, if you shot for Playboy you could get $15,000.’ He said, ‘Let me just take some shots.’” She later learned she was nominated as a “Playmate” but she rejected the offer after discussing it with Hamel. However, years later the photos were released to the public by Playboy anyway, and Somers reportedly sued Playboy and received $50,000 in restitution, which she donated.

While most young people think that a healthy sex life ends after 30, Hamel and Somers, 71, have kept their sex life as vibrant as ever!

“[We have sex] a couple times a day,” Somers admitted to the hosts of the CBS show The Talk in a past interview. “He’s on hormones and I’m on hormones,” she said of Hamel. As the audience applauded with laughter, she quickly added: “I’m going to be so sorry I said that. What is it about men at four in the morning? And then I’m really awake around eight or so. We have busy mornings.”

Probably too much information for most people, but it definitely proves Miley Cyrus wrong about sex after 40!

“I heard when you turn 40, things start to go a little less sexual,” the “Wrecking Ball” singer said in a past interview with Today. “So probably around 40, around that time, I heard that’s when people don’t have sex anymore.”

The news of Somers’ story comes on the heels of women and men in Hollywood standing up to those who have sexually harassed them in the past. The scandals started with Harvey Weinstein, only for several more to erupt shortly after, including stars like Kevin Spacey and most recently showrunner, Mark Schwahn.