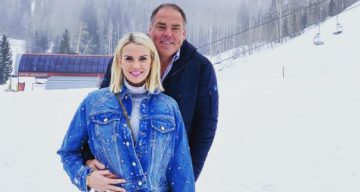 Whitney Rose and her husband, Justin Rose’s marriage has been in the spotlight since the entrepreneur debuted on The Real Housewives of Salt Lake City. Justin and Whitney had a questionable start, but have since built a strong blended family together. Whitney is showcasing the Rose fam with patriarch Justin on RHOSLC. The more often we see this couple, the more curious we are about Whitney’s husband. So, we’ve got this Justin Rose wiki with all the details on the reality TV husband.

Justin Rose was born on January 23, 1968 and is a native of Utah. He is one of five children born to Jack Wesley Rose and Gae Stott Rose.

Jack and Gae had initially settled in Portland, Oregon before moving to California and then Texas due to Jack’s jobs at Boeing and Saudi Aramco, respectively. Thanks to his work, the family traveled around the world.

The Roses settled in Utah after Jack retired. Jack passed away in 2019. He is survived by his wife, Gae; children, Gordon, David, Jacqueline, Scott, and Justin, and their spouses; and grandchildren.

Rose has worked in the marketing departments of companies like Nu Skin Enterprises, Aveda, Melaleuca: The Wellness Company, USANA Health Sciences, and currently, LifeVantage Corporation. But with the attention on him since RHOSLC’s debut, it’s been revealed that he has gotten into legal trouble.

LifeVantage is a company that sells dietary supplements. They rely on individuals to do the sales and recruit other sellers.

In 2018, the company was the subject of a class-action lawsuit regarding an alleged illegal pyramid scheme. Rose, as Chief Sales Officer, and other executives were also named in the lawsuit.

Although all but one of the claims was dismissed due to lack of evidence, the case is still ongoing. No comment from Justin or the company is available.

Justin Rose’s career has earned him an individual net worth estimated at $2.6 million. Adding Whitney’s income from her skincare business, Iris and Beau, and RHOSLC per-season earnings, their combined net worth could be much higher.

Whitney, too, was married, but any details about her ex are unknown. Justin met Whitney while they were both working at Nu Skin. Justin was the president from 2000 to 2010 and Whitney worked in the sales department.

They had an affair, which led to them ending their respective marriages. They married on April 9, 2010, and had a vow renewal for their 10-year anniversary this year.

Whitney and Justin were both Mormons, but she stated that she left the faith due to her affair with Justin, her boss at that time. They haven’t stated it outrightly, but it’s speculated that Justin left the Mormon church, too.

Though they started out as an affair, Whitney has bonded with Justin’s children. She is especially close to Austin, who has been a friend to her. Her stepchildren were also excited to see her debut on RHOSLC.