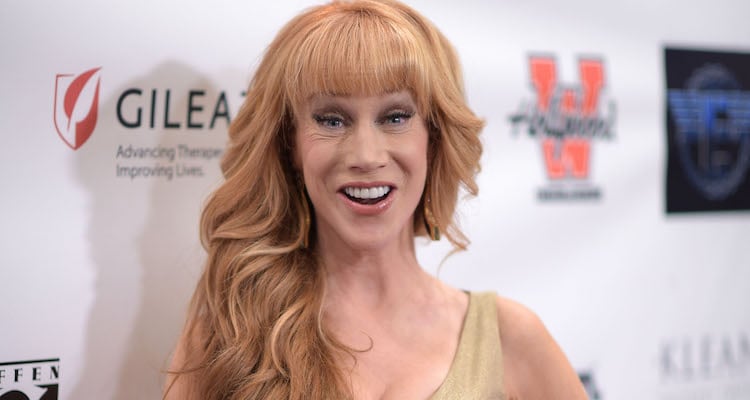 Kathleen Mary Griffin was born in Oak Park, Illinois, a suburb of Chicago, on November 4, 1960. Her parents, John and Maggie, were Irish immigrants and Griffin was the youngest of her siblings —Kenny, Joyce, Gary, and John— with over 20 years between her and her eldest brother.

Griffin was interested in performing since she was very young and told funny stories about her family to the neighbors. While attending Oak Park and River Forest High School, she fell into musical theater, performing in her school’s productions of How to Succeed in Business without Really Trying, and Fiddler on the Roof. After high school, Griffin convinced her parents to move to Los Angeles and help her establish a career as an actress.

In order to establish that someone has been blacklisted, you must first establish that it is an intentional blocking of a career, and not a case of a career on the downturn. Griffin’s career is much like that of many others. She started with The Groundlings improv group, and from there, moved to stand up comedy before acting, with small roles in films like Pulp Fiction and TV shows like The Fresh Prince of Bel-Air. The small parts became larger ones, which led to regular work like her role on Suddenly Susan. After Suddenly Susan, Griffin’s career went into overdrive.

She started hosting awards shows, talk shows, reality TV shows, and stand-up tours in large venues. Griffin was seemingly everywhere. So, what did Kathy Griffin do to get blacklisted? After seeing a decline in roles since her controversial Emmy speech was considered to be blasphemous, her appearances on various shows and functions were terminated. But worse; all of her work seemed to come to a screeching halt when a photo of her holding the likeness of a decapitated, bloody head of President Donald Trump was posted on May 30, 2017. But was she actually blacklisted?

Thank you Amsterdam! The standing ovation made me feel like my future's so bright, I gotta wear shades.‬ – Sunglasses by the fabulous @aaribostroem

If you listen to Griffin, after the photo was published, the controversy that surrounded it started to kill off her work. CNN, for example, decided to cut ties with Griffin, who co-hosted New Year’s Eve with Anderson Cooper. According to a video she posted recently, Griffin claims that the photo itself got her blacklisted and that when she returns from her current stand up tour, she has no work lined up. None.

Is this true? Well, to be fair, we honestly can’t argue with part of her statement. As far as we can tell, she doesn’t have any work lined up when she returns to the United States. But, this is not the first time that the comedian has claimed to be blacklisted. Griffin said that she was blacklisted from The View after discussing her time as a guest co-host on one of her comedy specials. That ban was eventually lifted, but according to Griffin, it was reinstated after some jokes were made about Barbra Walters. She also claimed that she was banned from The Tonight Show with Jay Leno. During her show My Life on the D-List, she claimed she was also banned from performing at the Apollo.

So, it seems like only time will answer the question of whether or not Kathy Griffin was blacklisted.