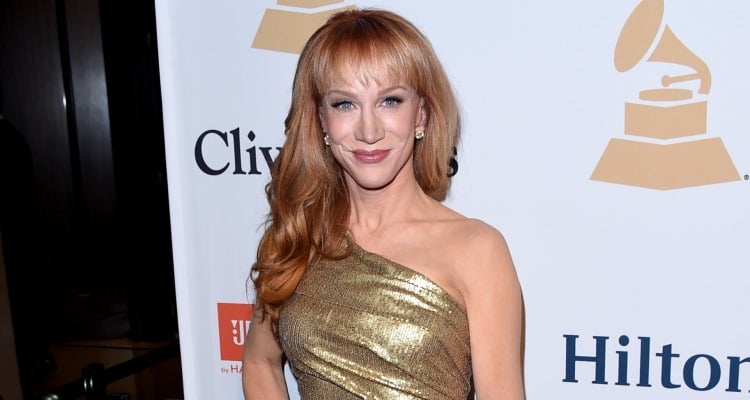 Emmy-winning comedian, Kathy Griffin wass in hot water for her graphic photo/video against President Donald Trump. Whether you’re for or against the commander in chief, many agreed that Griffin’s photoshoot (depicting her holding a bloody, severed “Donald Trump” head) was distasteful and went too far. This has lead people (possibly including the Secret Service) to look into the 56-year-old comedian’s life, including Kathy Griffin’s boyfriend. If you want to learn more about him, then take a look at our Randy Bick wiki.

As he’s not quite as famous as his comedic girlfriend, Randy Bick’s net worth is unknown at the moment. However, we did some digging and we do know that he’s an executive in marketing, and he met Griffin in 2012 at a food festival in Los Angeles. She also thought he wouldn’t be more than a one night stand!

“Because I thought he was just a man-whore, if you will,” she said to People.. “So yeah, we’ve been together five years now, and we have a great time, and he’s very sweet and very mellow. He’s like a regular guy, you know, he’s like a real guy. He’s not like a Hollywood guy,” added Griffin, gushing about her man.

Randy Bick’s job in the marketing field began with The Los Angeles Times, where he was responsible for the research and analysis of the potential consumer market.

He worked with the publication as an analyst for a year from 2008-2009 and then was promoted to marketing manager, a position he held for three years till 2012. His Linkedin page suggests that he is currently placed with Inappropriate Laughter, Inc, as a Touring and Marketing Director.

Kathy Griffin and Randy Bick Have an 18-Year Age Gap

If there’s one thing that stands out in their relationship— other than Griffin’s famous swearing— it’s their age difference! Griffin bagged herself a much younger man!

“Well you know, I didn’t think it would last [because] he’s 18 years younger than I am!,” she told People.

“Here’s the thing, I don’t want one iota of judgement from you because he’s a little younger than I am,” she said in a past interview with People. “I’m 52 and he’s 33 … He’s a marketing executive, he’s a normal guy. I met him at a food festival. The LA Times is putting out a food festival called Taste LA, and I hunted him down.”

Griffin was previously married to ex-husband, Matt Moline and has also dated Quentin Tarantino, Steve Wozniak, Jack Black and NFL player, Isaiah Mustafa in the past.

She and Bick share a stunning 13,000 sq.ft. home in Bel Air, which cost he comedian a solid $10.5 million! Kim Kardashian and Kanye West were her neighbors before they moved.

During the Trump incident, she retreated into her home, and shut the doors to the open world for quite a while. During the time, a supportive Bick was by her side, when most people, including her mother had turned.

He kept her morale up throughout the process, and when the rest of the world was against her, he came to her rescue and kept loneliness at bay.

Kathy Griffin vs. The White House

While there are some that don’t mind the commander in chief being the victim of joke gone too far, others aren’t seeing the softer side of it, including Donald and his wife, Melania.

“As a mother, a wife, and a human being, that photo is very disturbing,” Melania Trump said in a statement. “When you consider some of the atrocities happening in the world today, a photo opportunity like this is simply wrong and makes you wonder about the mental health of the person who did it.”

Although Griffin issued an apology on Twitter and Instagram, the White House didn’t approve of her video of a decapitated president. Even Chelsea Clinton said she found it distasteful. It has been said that Donald’s 11-year-old son, Barron has been affected by the graphic imagery the most out all of the kids.

Is Kathy Griffin’s Brand in Danger?

It seems that Donald’s head isn’t the only one being collected in the recent scandal. One of Griffin’s endorsement deals has just gone down the drain, including some of her comedy tour stops being cancelled. Squatty Potty, a brand of stepping stools for toilets, gave Griffin the axe when the video was revealed.

“It was deeply inappropriate and runs contrary to the core values our company stands for,” Squatty Potty chief executive officer, Bobby Edwards said in a statement. “We have acted swiftly and decisively to demonstrate our commitment to a culture of decency, civility, and tolerance.”

Griffin’s partnership with CNN was also affected since her graphic post involving the president. She lost her New Year’s Eve hosting privileges, according to the broadcast network.

“CNN has terminated our agreement with Kathy Griffin to appear on our New Year’s Eve program,” the network’s official Twitter account posted on Wednesday.

But it looks like, with every other controversy, Griffin’s has also faded. The comedian is back in action, a year after the incident, and is all set to perform at the Dolby Theater on July 19 and July 20, 2018 as a part of her “Laugh Your Head Off,” national tour!

“I definitely had two very rough days in a ball on the floor sobbing. But you know, I’m just so hard-wired to do comedy that right after that I started, you know, spit-balling ideas. Coming up with the tour title “Laugh Your Head Off,” not knowing if I’d ever be able to tour again,” Griffin told The Los Angels Times.