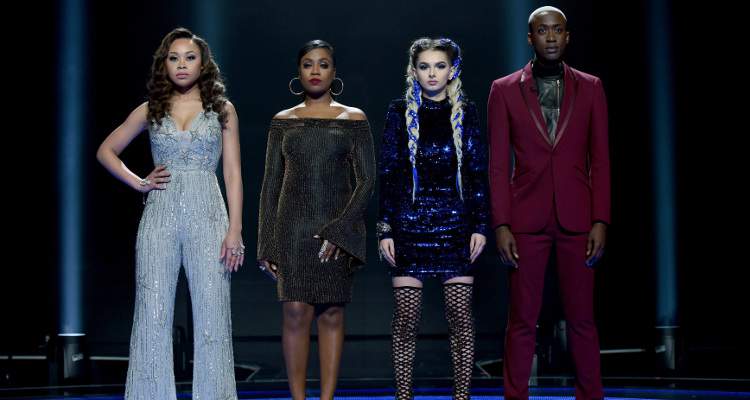 After six weeks of intense competition with a quartet of the best aspiring singers, we finally have the winner of The Four: Battle for Stardom. So, who won on The Four? We’ve got the scoop on The Four winner 2018, right here!

The Four: Battle for Stardom finale aired last night and announced the winner of its debut season. Fox already renewed The Four for a second season ahead of the finale.

Candice Boyd, Vincint Cannady, Evvie McKinney, and Zhavia were the last four standing after six weeks of competition. Which contestant won The Four? We’ve got details from the fantastic finale below.

Candice Boyd, Vincint Cannady, Evvie McKinney, and Zhavia were the finalists of The Four. They were competing to be named as iHeartRadio’s “On the Verge Artist.” But, they also wanted to win the ultimate prize: A recording contract with Republic Records through Universal Music Group.

Sean Combs, DJ Khaled, and Meghan Trainor, along with host Fergie, joined the audience to pick the winner. Charlie Walk, Republic Records’ head honcho, stepped out of the finale in the wake of sexual harassment allegations against him.

The finale kicked off with a group performance of Lady Gaga’s “The Edge of Glory,” with the episode divided into different rounds.

In the first round, each contestant performed a song, and the audience voted. The winner of the first round got to decide the matchups for the head-to-head battles in round 2. And the winners of the second round would face-off against each other to be crowned the winner.

Candice took the stage first, belting out a spectacular performance of the No Doubt hit, “Don’t Speak.” She was fabulous as always, and the judges were floored.

Next up was Evvie. From the very first note, Meghan Trainor was already in love with the 20-year-old’s version of “Proud Mary.” True to Tina Turner’s style, Evvie threw a few dance movies in there.

Fan-favorite Zhavia performed “One Dance” by Drake. While it was flawless, the judges felt her performance left a lot to be desired. Blame it on the high bar she set for herself.

After the audience votes were in, Evvie was named the winner of round one.

Evvie gained the advantage of picking her opponent for round 2. She challenged Zhavia, who delivered a lively performance of Rihanna’s “Man Down.” But Evvie fired back with “Ain’t No Sunshine.”

The winner needs the majority vote from the judges. DJ Khaled was on the fence for a while, but the trio declared Evvie the winner of the battle.

Next up, Vincint and Candice. Vincent performed his rendition of “Locked Out Of Heaven.” Meanwhile, Candice made the bold selection of singing Whitney Houston’s “I Have Nothing.”

Trainor voted for Vincint, and DJ Khaled picked Candice. Now Sean Combs had the decisive vote, which he decided to give to Candice.

Vincint and Zhavia were eliminated in the second round.

Our final two, Evvie and Candice, went head to head for the final prize. Evvie took the stage first with John Legend’s “Glory.” Her song choice couldn’t be better, and her performance was definitely glorious.

But Candice made the decision really tough with her performance of Rihanna’s “Stay.” It was now up to Diddy, DJ Khaled, and Meghan Trainor to decide the winner.

After some intense deliberation, Fergie announced the winner. The first champion of The Four: Battle for Stardom is … Evvie McKinney!

Congratulations to the winner! Check out Evvie’s crowning moment below.