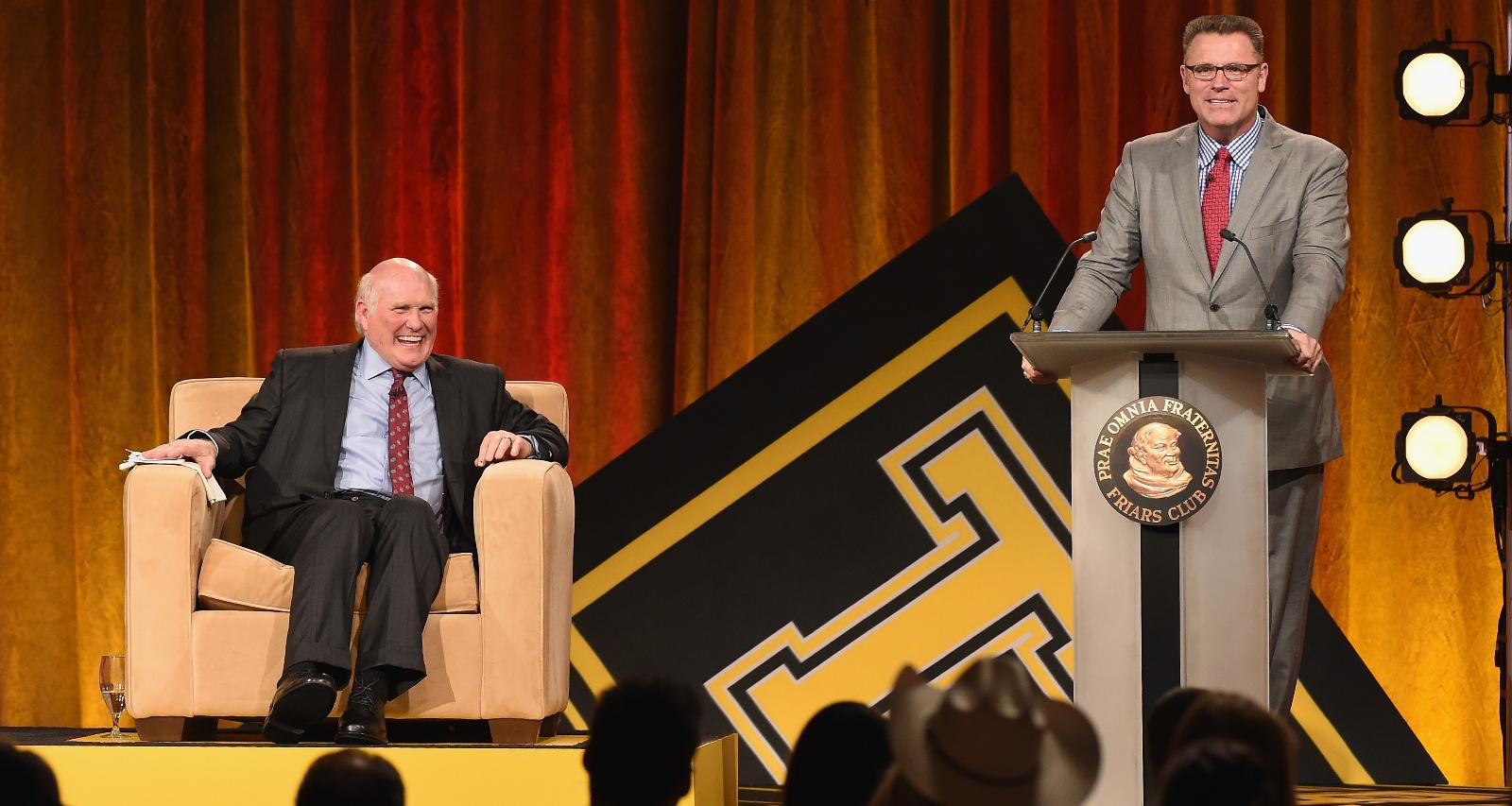 Pro Football Hall of Famers Terry Bradshaw and Howie Long have been weekly staples on Fox NFL Sunday since its 1994 debut. Long has played the straight-man foil to Bradshaw’s funny persona for decades, and their chemistry on the panel is undeniable. Their bond even has some fans asking, “Is Terry Bradshaw related to Howie Long?” Bradshaw even refers to Long’s kids as his nephews. Well, these NFL legends have a long history, but they aren’t related by blood.

Given their unrivaled dynamic, Fox NFL Sunday viewers often mistake Terry Bradshaw and Howie Long for brothers. As much as we’d love that to be true, the former NFL pros are not really family.

Bradshaw and Long have been friends for at least 25 years. They had met before in passing at a Super Bowl, but their friendship grew when they were cast on Fox’s Emmy-winning show.

With a friendship that longstanding, it’s no wonder they consider each other brothers. Long once even claimed that Bradshaw is “the older brother I never wanted.”

Former quarterback Bradshaw was born on September 2, 1948, to William and Novis Bradshaw, which makes him 70 years old and 12 years Long’s senior. The Louisiana native spent his football career playing for the Pittsburgh Steelers and won four Super Bowls in his career.

Massachusetts-born Long is 58 years old. In his 13 seasons with the NFL, he played with the Raiders franchise, first in Oakland and then in Los Angeles. The defensive lineman retired in 1993, a decade after Bradshaw.

The following year, Fox came up with a never-before-done football show. It would be an hour-long pre-game show about guys talking football like they would at a playoffs viewing party in their homes. Terry Bradshaw and Howie Long were among the original quartet tapped for Fox’s show.

Bradshaw was the one who got Long to audition. But Howie was so over-prepared with his football knowledge, he messed up his audition.

Even though Long wasn’t exactly what Fox was looking for, they wanted to see how well he worked with Bradshaw. Adapt he did and the duo has been a mainstay of Sunday-night football ever since.

The lineup for Fox NFL Sunday has changed several times, but Bradshaw and Long have been the only constant.

While Chris is a defensive end for the Philadelphia Eagles, Kyle plays guard for the Chicago Bears. The youngest, Howie Jr., doesn’t play in the NFL, but works on the operations side for the Oakland Raiders.

Bradshaw is close to the Long family and Howie’s sons. “He’s like family for me and my boys. He’s kind of like the crazy uncle. All my kids grew up with him,” said Howie Sr.

Even if he’s not their father’s real brother, Bradshaw is “Uncle Terry” to the Long kids. Bradshaw even recalls playful instances from their childhood. “Take 18 years off of Chris and he’s eight years old. I got out of a car here in Charlottesville one night many years ago in a snowstorm and I’m getting pelted by snowballs by Little Howie and his gangsters of love. I can handle Little Howie, but not the other two, they’re bigger than I am.”

Kyle and Chris are also not above getting in on the fun with Uncle Terry. Kyle once quipped he was ready to “talk some smack” with Bradshaw when the Bears were going to face off against the Steelers in 2013.

Smack-talk aside, the Long boys have a great deal of admiration for Bradshaw. Kyle’s earliest memory of his uncle’s legendary team is Bradshaw’s “Immaculate Reception” during the 1972 Pittsburgh Steelers vs. Oakland Raiders game, which happened way before Kyle was born and even before his father would join the NFL.