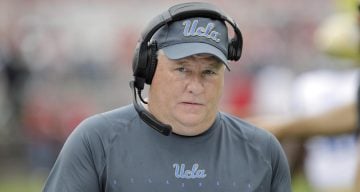 Who Is Chip Kelly?

He’s currently a head football coach for the UCLA Bruins. Chip Kelly was a head coach at the National Football League (NFL) twice.

Ever since Chip Kelly became UCLA football’s head coach, the Bruins started the year 4-0 for the first time since 1971.

Who Is Brian Kelly?

In the past, he has been the head coach at Grand Valley State University, Central Michigan University, and the University of Cincinnati.

We emphasized the need for a sense of urgency this week and Sam Mustipher stepped up, led this team and earned the game ball. #GraduatingChampions pic.twitter.com/ZWI7IfJjmY

Before he became a coach, Brian Kelly was a four-year letter-winner as a linebacker at Assumption College. After his graduation from Assumption, he was a linebackers coach, softball coach, and also a defensive coordinator.

Are They Related to Each Other?

The answer is no. The two football head coaches aren’t related at all.

They are related by profession, sure but that’s about as far as their common bloodline goes. It’s an assumption many have made and an odd coincidence that both Chip Kelly and Brian Kelly happen to be in the same field of work.