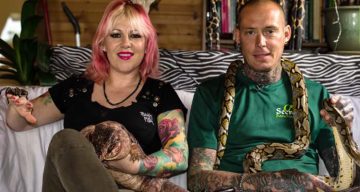 Nadine Keys is the ex-wife of reptile behaviorist and snake handling expert, Simon Keys, who is best known for his appearance on the hit Nat Geo show, Snake City. Nadine, who is a reptile lover herself, also appeared in the first season of the show, although she made a quick exit. Simon Keys’ ex-wife has not crossed his path in years and it has many wondering, what happened to Nadine Keys? Find out more about her below.

After a successful first season of Snake City, Nadine Keys made a mysterious exit from the show. Simon Keys, who is the main man behind the reality show, soon started co-hosting it with his snake-catcher girlfriend, Siouxsie Gillett. This gave fans a clue about Simon and Nadine Keys’ divorce.

However, Nadine moved passed not just her ex-husband and the show, but showbiz in general. So, what exactly happened to her? Is Nadine Keys dead?

Though there have been vaguely reported instances of her death over the years, most are believed to be unrelated or fake. It is also rumored that Nadine made a retreat to her hometown after getting divorced, and is now living a low-key life with her family back home.

Nadine and Simon Keys seemed to love each other just as much as they each love snakes. The dashing couple co-hosted the Nat Geo reality show, Snake City rather successfully, making many fall in love with the duo.

They originally met in England and formed an immediate connection with their common love for reptiles. Soon, the two fell in love and tied the knot in South Africa.

Their love for wildlife led the couple to Durban, South Africa, where they lived for seven years. This is when a friend of theirs captured their love for snakes and put forth a proposal to National Geographic, which led to the debut of Snake City.

However, Simon and Nadine Keys soon parted ways, for reasons that remain fully unknown to the public. After their separation, Simon returned to the United Kingdom and met Siouxsie Gillett, a woman from the snake industry he knew for 14 years.

Together with his girlfriend, Simon starred in four seasons of the hit show and is set to be featured in more. Nadine Keys, on the other hand, has left audiences with nothing but mystery, and several questions waiting to be answered.