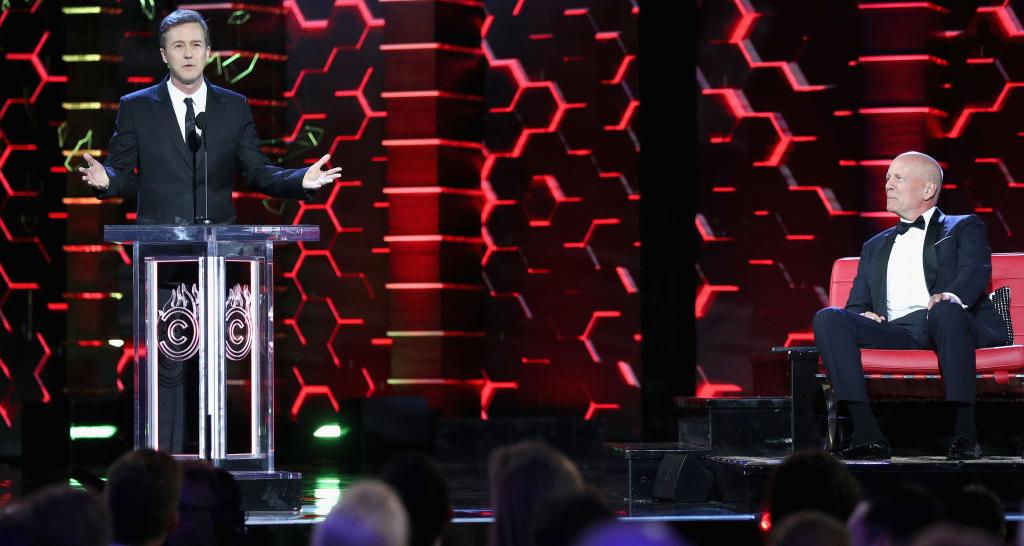 Edward Norton thanked Bruce Willis on Comedy Central’s Roast of Bruce Willis for supporting him and acting in his movie, Motherless Brooklyn, after having committed to working with Norton many years ago. Norton also made a joke that Willis couldn’t tell if Norton was really grateful or was just acting like he was. Willis had a big laugh about it, and the two actors hugged it out. It was a touching moment in the otherwise no-holds-barred Bruce Willis roast.

Some of the biggest names in Hollywood took digs at action star Bruce Willis in Comedy Central’s much-awaited, Roast of Bruce Willis. But a really touching moment came when Edward Norton spoke about how Willis had encouraged him many years ago.

Edward Norton and Bruce Willis have been working on a movie together these last few months called Motherless Brooklyn. It’s a passion project for Norton, who is both starring in it and directing it, as well.

A Mysterious Letter at Norton’s Door

Norton went down memory lane and recounted how the seeds of his working with Willis were sown many years ago, and it was almost predestined.

When Norton was working in a play, he came home to his apartment and found a letter at his door. The letter was from the Four Seasons.

The actor read the letter and saw that it was signed by Bruce Willis. It said that Willis liked the work Norton was doing and if he ever had a part in a film project for him, Willis would gladly work in it.

Norton did not believe it at first and thought that it was a prank. He then called Willis himself and asked him if he had indeed written the letter in question.

An Agreement Was Made Over a Beer

Willis admitted that he had written the letter and was eager to work with Norton. They went out for a beer that night, and Willis once again told Norton that he would act in any movie Norton made if there is a good role for him.

Norton left Willis that night thinking it wasn’t likely to happen and that Willis was very generous.

Norton Wanted to Adapt Motherless Brooklyn into a Film

Essrog works for Frank Minna, who is the owner of a seedy and makeshift small-time detective agency.

Minna is stabbed to death one day, and now Essrog wants to investigate his mentor’s murder to find out who killed him.

Essrog is joined in his quest for finding Minna’s killer by three other characters named Tony, Danny, and Gilbert, who call themselves “The Minna Men.”

Norton has written, directed, and acted in the film version of this book, which is also called Motherless Brooklyn. The film stars Norton as Essrog, Willis as Frank Minna, and other luminous stars like Willem Dafoe, Alec Baldwin, and Gugu Mbatha-Raw.

At Bruce Willis’ roast, Norton said that when he called Willis to ask him if he would work in the movie, he gladly agreed and reminded Norton of the commitment he had made to him all those years ago.

Norton made the movie, and it has turned out very well, according to reports.

Is Norton Really Grateful or Is It an Act?

Norton said that he was very grateful to Willis for having worked with him on his movie, which is very dear to Norton’s heart, and thanked him.

Then Norton said that his gratefulness could also be an act that he is keeping up to fool Willis and that the actor wouldn’t know the difference.

He said that he loved Willis because he could not tell if Norton was faking it or his emotions were real.

Willis and everybody at the roast laughed at Norton’s joke and the actors proceeded to embrace each other. It was evident that they liked working together and the respect for their talent was mutual.

Norton and Willis Have Worked Together Before

Motherless Brooklyn is not the only film in which both Norton and Willis have worked together. They acted in a movie named Moonrise Kingdom, a 2012 American coming-of-age movie.

Moonrise Kingdom is about a young orphan (Gilman) who escapes from a scouting camp on an island to unite with his pen pal, a girl (Hayward) who has aggressive tendencies.

Everyone shuns them because of their disturbing behaviors, and the two go to an isolated beach they call Moonrise Kingdom.

Meanwhile, a search party consisting of scouts, police, and family members gets launched to bring them back.

Also Read: Everything You Need to Know about Bruce Willis’ Wife Emma Hemming

Norton directed Motherless Brooklyn, and him asking Willis to act in it and Willis readily agreeing to it is very significant. It was apparent that both Norton and Willis held each other in very high regard and had a great time working together.

Stories like this make Hollywood and its stars larger than life!

Click on the video below to listen to Edward Norton’s joke about Bruce Willis working in the film, Motherless Brooklyn: