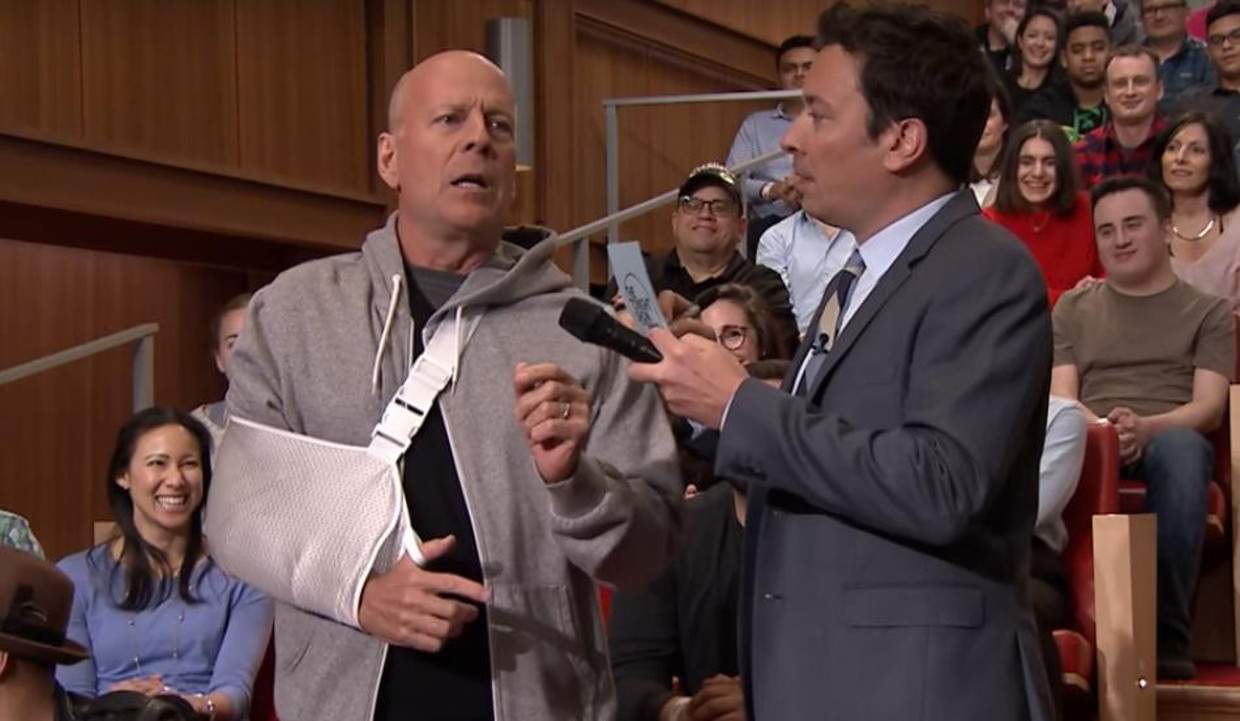 Bruce Willis dropped by The Tonight Show Starring Jimmy Fallon to get a song written in his honor. But the Twitterverse would rather talk about the action star’s broken arm! So, what happened to Bruce Willis’ arm? There’s an interesting story behind it. So, read on to find out!

American actor Bruce Willis is known to twist many a baddie’s arms on screen. But the action star, who’s taking crime-fighting to an extreme in Death Wish, has fans worried about his own arm!

Bruce Willis’ injury took center-stage on social media since his appearance on The Tonight Show Starring Jimmy Fallon. We’ve got the scoop on Bruce Willis’ broken arm, so keep reading!

Last night (February 27), a few lucky audience members on The Tonight Show Starring Jimmy Fallon had the house band, The Roots, write an impromptu song for them. What we didn’t expect was to have the Bruce Willis in the audience freestylin’ with The Roots!

Willis did a fine job pretending to be a regular guy introducing himself as simply “Bruce.” Fallon asked what he did for a living. To that, Willis casually responded he’s an actor.

But what had everyone’s attention was the sling on his right arm!

For the sake of all our curiosities, Fallon asked Willis what happened to his arm. We’ll be frank here. We were expecting Willis to say something like he pulled a muscle fighting 10 guys atop a building!

But he said that he hurt himself while trying to be a “big strong man.”

Not sure if he was kidding, but Willis said he was working out “and then after the third dip, I heard a little ping.” He went on to re-enact the electrifying feeling the moment he injured his arm—and it sounded painful!

The exact nature of his injury hasn’t been disclosed, but fans expressed their wishes for Willis’ arm to heal soon. Well, considering it’s Bruce Willis, he could beat up goons with just one good arm!

Nevertheless, Willis nonchalantly mentioned that his new movie, Death Wish hits theaters this Friday. He also mentioned he has an affinity for wind instruments. (He’s talking about the harmonica, not knocking the wind out of someone.)

The Roots went on to freestyle a song for the mighty Bruce titled “The Man Who Forgot What His Job Was.” The fun song with a Justin Timberlake vibe gave an ode to Willis’ injury, among other things.

Watch Willis “Freestylin’ with The Roots” segment on The Tonight Show below. It’s awesome!

Bruce Willis gets up to his usual badassery in Death Wish, which hits theaters on March 2, 2018.