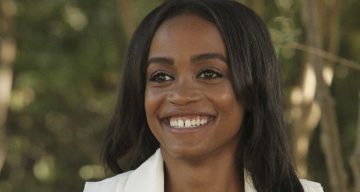 On Thursday, May 18, it was revealed that Rachel Lindsay is, “very much so in love and very much so engaged.” With The Bachelorette airing on May 22, 2017, Rachel previously disclosed that her journey on the show has led to a successful proposal and what we hope is a happy ending for the couple. Although she could not disclose her fiancé’s name, she did say that, “If I had a list he would check everything off.”

We first saw the 32-year-old attorney on Nick Viall’s Season 21 of The Bachelor. She was eliminated in the final three and confessed that she was in love with Nick.

About hiding her current relationship from the media Rachel said, “It is hard, I’m used to a long-distance relationship where we can’t see each other all the time and we can’t be public. I’m used to that. But it’s hard when you’re so excited about something and you can’t share it with everyone. But we make sure to communicate with each other all the time, and that’s all you can really do.”

Here are some exciting and juicy details to know about Rachel Lindsay.

She is an Attorney

Rachel Lindsay’s birthday is April 21, 1986. She was born and raised in Texas, and currently works in Dallas. She is specifically from the Oak Cliff borough, where stars like Yvonne Craig, Jimmie Vaughn, T-Bone Walker, and Stevie Ray lived. Although Rachel is only 32 years old, she has accomplished a lot in her life to become a successful attorney.

While in college, Rachel was on the intramural basketball team, as well as the African-American culture committee. She even had a scholarship while studying at Marquette. The two biggest achievements in her life are graduating from law school and passing her bar exam on her first try.

During Nick Viall’s season of The Bachelor, Rachel undoubtedly was one of the most educated contestants. She has a BA in Kinesiology and Sports Management from the University of Texas and has a Juris Doctor (JD) in Law from Marquette University Law School. In 2011, Rachel entered the Texas State Bar and the Wisconsin State Bar. She was then admitted to the U.S. District Court for the Northern District of Texas in 2012.

Rachel Lindsay has sort of become a public figure now. Other than reality TV, she worked as a legal intern in the Public Defender’s Office and with the Milwaukee Bucks. Currently, Rachel works at a law firm called Cooper & Sculley in Dallas. She is also a volunteer at Beacon Hill Preparatory Institute, where she tutors students in reading, writing, and SAT prep.

Rachel Lindsay is Extremely Close to Her Family

We got to know more about Rachel Lindsay’s family while she was on The Bachelor. She comes from a strong law background as her dad, Sam A. Lindsay, is a District Judge in Dallas. Rachel also has two sisters, who she is extremely close to. She and her family are very connected with their church, where they volunteer.

Rachel also has an older brother, Mark Simmons, who is married to a woman named Candace. The couple has two adorable sons together. Recently, Rachel became an aunt to little Hendrix, who arrived just in time for the season premiere of The Bachelorette. She also has a sister named Constance Cherones who has a son with her husband, Alex.

Less than six months ago, Rachel made her debut in the world of reality television on The Bachelor. Now, she is the first African-American woman to become The Bachelorette! Rachel Lindsay’s net worth is estimated to be $450,000.