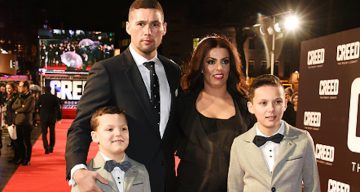 English boxer, Tony Bellew is no stranger to being in the spotlight, but many have started to ask questions about Tony Bellew’s girlfriend, Rachael Roberts. But who is the woman behind the man and what does she bring to the table? If you want all the details on Roberts, then have a look at our Rachael Roberts wiki, right here.

Although Bellew considers Roberts his wife and addresses her as such, they technically aren’t married, but they are engaged! They’ve known each other since they were kids and started dating when they were in their teens. There’s no word or hint on when the big day could be, but who knows, it could be around the corner before you know it!

She’s the Mother of Bellew’s Children

They may not be married, but Roberts and Tony are very much in love with each other, and they share three kids; sons, Corey, Cobey, and Carter. Fans of the boxer can see him and his family on Instagram, where they often share heart-felt moments together. (And here we thought boxers were always dangerous!) Roberts was recently on vacation in Dubai with the kids, while Tony was in the ring. Roberts’ own Instagram account is private, so no hot pics for you!

His Fiancé Shows How Much He Cares

According to a post on Bellew’s Instagram account, Roberts’ birthday is on December 22 (Capricorn alert!) but there’s no exact year or information on her age. But then again, it’s impolite to ask a woman’s age anyway, so we’ll leave it alone! Bellew took the time to say how much he loves his “wife” and clearly isn’t afraid to show it, with a bit of humor too!

Bellew wrote: “Happy birthday Rach… I couldn’t have dreamed I’d of ended up with a girl so beautiful and more importantly so loyal! The best mother I know. We’ve been through the whole lot together girl..3 kids And so many memories.. I love ya more than you’ll ever know.. enough soppy crap now, go get the eggs and salmon going [sic].”

Even Bellew is Afraid of Her

It’s hard to imagine that Tony Bellew is afraid of anyone, especially since he’s fought some of the toughest boxers in his career! But when it comes to Rachael Roberts, he knows his place. After winning his fight against David Haye in a grudge match last week, Bellew admitted that he was more scared of his soon-to-be-wife.

Bellew added: “I will say one thing, I fear no man. I don’t give a f**k about any man on this planet. I would fight any man,” and “I tell you what though, I don’t go home to her with a penny short.”

Bellew’s net worth is believed to be approximately $11.0 million in American dollars, so it might not really matter if he’s a penny short, either way! But if we’re being honest, we wouldn’t mind seeing the happy couple go a few rounds in the ring! For fun, of course.

Bellew was in the Movie, Creed

Rachael Roberts is kind of engaged to a movie star—since Bellew starred in Creed, alongside Michael B. Jordan. He played the role of boxer “Pretty” Ricky Conlan, who lost against Adonis Johnson.

Tony Bellew was hesitant at first, but realized that being part of the franchise was the opportunity of a lifetime.

“At first I regretted doing it because it affected my boxing career,” he said. “My boxing career went backwards a bit. I’d defeated Nathan Cleverly and then I disappeared off to America for three months. The movie did take 12 months out of my boxing career.”

Bellew is currently nursing his broken hand, after winning his fight against David Haye. Hopefully he will recover soon; he needs that to propose to Roberts!