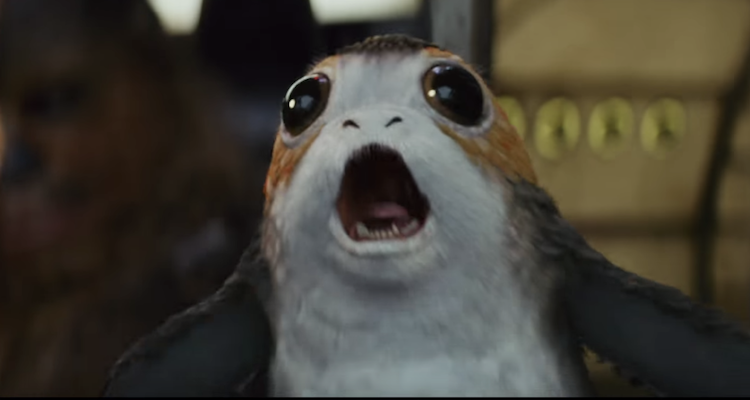 What is a “Porg?” After watching the new trailer for Stars Wars: The Last Jedi, the porg has people talking! The latest installment in the mega franchise is just a couple months away and fans can’t decide whether or not they want to be spoiled. But if you don’t mind spoilers and trailers, then here’s what you need to know about the new Star Wars animal, the porg!

There’s no question that Monday Night Football is a big deal for fans, but those who enjoy the game and fantasy were able to get the best of both worlds on one field last night. There were stormtroopers everywhere and it looked like the kind of story that ends with “you should’ve been there.” It was the trailer for Star Wars: The Last Jedi and so far, fans aren’t disappointed. You may not remember who won (or who even played) but whether you’re a football fan or not, you made sure to tune in last night if you wanted a first-look at the exciting trailer. This is the eighth installment in the hit film franchise and there was a lot of new footage, including a couple scenes with the late Carrie Fisher! Also new to the famous franchise is one of the new Star Wars creatures, Chewbacca’s new friend, a porg!

The Porg in Star Wars: The Last Jedi

What is a porg? The porg in Star Wars is getting a bit of attention and there some who want to know more about it after watching the newest trailer. While some practically have a PhD in all things Star Wars, there are others who are still in the dark about the many creatures that exist in the film’s universe. A porg is actually a bird-like creature that is native to the planet Ahch-To, which is where Luke Skywalker spent his time in exile after the Battle of Endor. According to writer/director Rian Johnson, porgs are in fact sea birds and do have feathers, fly short distances, and males are slightly larger than females with varied coloring. It’s also possible that other species in the galaxy far far away have eaten porgs, except for vegetarians like Luke.

We can’t blame BB-8 for losing his head over the porgs, too. #StarWarsBlips #MorePorgs #TheLastJedi

Expect porgs to be the newest marketing tool that will no doubt end up in plush-toy form. It’s unknown to fans whether or not they will have a significant role in the movie, but one porg in particular is riding shotgun with Chewbacca, so we can expect to see more of the avian creature in the future. Since the last Star Wars film, fans have been waiting to see what happens next, especially when it comes to the topic of Rey’s parents. In the trailer, we got a glimpse of her potential power and it was enough to convince Luke not to train her. Will that moment last, or is Rey making the former Jedi wish he had stayed hidden? By the looks of it, fans will not be disappointed and can’t wait to have their questions answered.

Star Wars: The Last Jedi hits theaters on December 15, 2017 and tickets are already on sale.

Watch the new trailer for #StarWars: #TheLastJedi and see it in theaters December 15. YouTube link in profile.