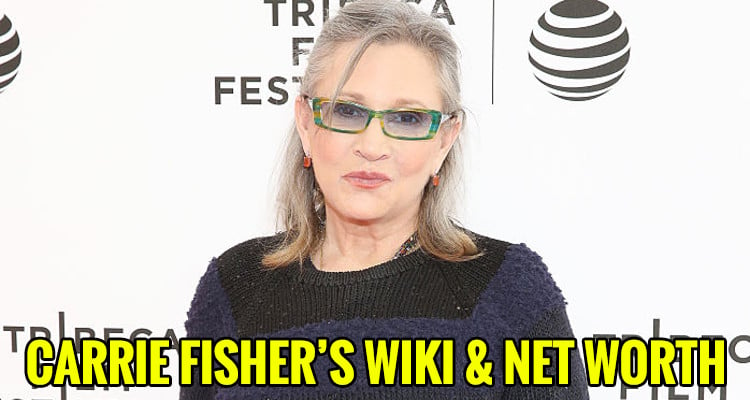 Carrie Fisher’s death is very sad news for everybody. To remember the legendary actress, we have put together some interesting facts from Carrie Fisher’s wiki!

Actress and author, Carrie Fisher died on Tuesday (December 27) morning at 8:55 a.m. in Los Angeles. On Friday (December 23) she suffered from cardiac arrest while travelling from London to Los Angeles. Fisher was admitted in the hospital and, after receiving treatment, her family announced that she was in a stable condition.

It is definitely a very hard time for Fisher’s family and friends. She is survived by her daughter, mother, and brother. To remember the legendary actress and her great work, we have put together some information about Carrie Fisher.

She was Born in Beverly Hills

Carrie Frances Fisher was born on October 21, 1956 in Beverly Hills, California. She is the daughter of late singer, Eddie Fisher and famed actress, Debbie Reynolds. Her parents divorced when she was two. Eddie Fisher left Reynolds for actress Elizabeth Taylor, one of her closest friends at the time. After her divorce, Reynolds married millionaire and businessman, Harry Karl.

Growing up, Carrie Fisher was an avid reader, and she spent most of her time reading classic literature and poetry. At 15, Fisher appeared as a debutante and singer in the Broadway revival of Irene, which featured her mother.

Being on Broadway took away from her studies, and Fisher never graduated from high school. In 1973, she enrolled in London’s Central School of Speech and Drama, which she attended for 18 months. Fisher was then accepted to Sarah Lawrence College in 1978, where she studied arts before leaving due to conflicts with filming Star Wars.

Carrie Fisher has had her fair share of relationships. In her latest memoir, The Princess Diarist, she revealed that she had a brief affair with actor Harrison Ford, while filming for Star Wars in 1976. Fisher was in a relationship with Paul Simon from 1977 to 1980. They broke up for a short while, got back together, and then were married in 1983. The two filed for divorce a year later, but dated again for a bit after their split.

Fisher was engaged to actor and comedian Dan Akyroyd in 1980. He proposed on the set of The Blues Brothers. However, the engagement was short-lived as Fisher soon got back together with Simon.

After ending things with Simon, Fisher started dating Creative Artists Agency principal and talent agent, Bryan Lourd. The pair had one daughter together, Billie Catherine Lourd (24). However, their relationship came to an end when Lourd came out as bisexual, and left Fisher to be with a man. Although they were never legally married, Fisher would refer to Lourd as her second husband.

In 2003, there were rumors that Carrie Fisher and James Blunt were together, as the two were closely working on Blunt’s album, Back to Bedlam. When asked if their relationship was romantic, Fisher said that she was like a therapist to Blunt, and commented that it would be “unethical” if she were sleeping with him.

Carrie is famous for her role as Princess Leia in Star Wars. However apart from the Star Wars franchise, she has credits in movies such as Shampoo, The Blues Brothers, Under the Rainbow, The Man with One Red Shoe, Hannah and Her Sisters, When Harry Met Sally, Hook, Scream 3, and The Women.

When talking about Star Wars and the impact it had on audiences, Carrie Fisher said, “Movies were meant to stay on the screen, flat and large and colorful, gathering you up into their sweep of story, carrying you rollicking along to the end, then releasing you back into your unchanged life. But this movie (Star Wars) misbehaved. It leaked out of the theater, poured off the screen, affected a lot of people so deeply that they required endless talismans and artifacts to stay connected to it.”

Carrie’s net worth is estimated to be around $25.0 million.

Her booming net worth is due largely to the Star Wars films. Her net worth also comes from her books including, Postcards on the Edge, Wishful Drinking, and The Princess Diarist.