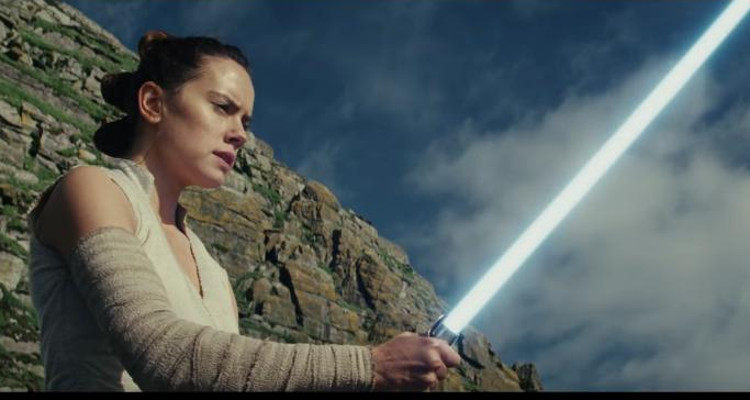 Star Wars fans, hang on to your lightsabers! The Star Wars: The Last Jedi trailer is here with some nail-biting teasers! If you want to wait until December to get your fix, proceed with caution: This piece contains spoilers.

After months of anticipation, the official trailer for Star Wars: The Last Jedi is here to blow our minds! The trailer is so epic, director Rian Johnson had to warn fans about it ahead of time! Thanks for the warning Johnson, but we’re suckers for a galaxy far, far away. It’s impossible to not dive into the action we’ve been waiting for, so we have a breakdown of the Star Wars: Episode VIII trailer to tie you over until December 15!

In a Galaxy Far, Far Away

After whetting our appetites with a debut teaser in April, a full-length trailer of the latest Star Wars installment aired on ESPN  at halftime during the Minnesota Vikings vs. Chicago Bears game on Monday (October 9) night.

The trailer opens with Kylo Ren looking rather ominous, standing at a viewport while the First Order prepares its war machine. A war is definitely brewing with the appearance of the new version of AT-AT walkers. Kylo is leading a new army of snowtroopers on a new terrain. The Last Jedi introduces a new planet called Crait and this stretch of land with red veins looks like it could be it.

Supreme Leader Snoke’s voice is heard as Kylo picks up a lightsaber. He’s heard telling Kylo why he chose him as his apprentice but as we later learn, Snoke has a different agenda.

We finally see Rey and her lightsaber ready to train with Luke Skywalker. Daisy Ridley does a stunning job showing Rey’s inexperience even in that brief glimpse. Mark Hamill plays a now older Luke who looks surprised seeing Rey and confused when she hands him his lightsaber.

There’s a shot of a mysterious book in a tree which has fans guessing what it is. But it looks like it could have to do with Rey’s training and it’s evident that she’s getting the hang of her Force. Her “raw strength” is astounding, even for Luke.

After shots of what looks suspiciously like flashbacks of Kylo’s betrayal, we see an angsty Kylo in full gear and bearing a weird scar from his fight with Rey in The Force Awakens. He looks pretty conflicted about his past as Ben Solo but he’s teetering on the edge of the dark side.

Between shots of a battle between the First Order and the Resistance, we see a glimpse of the late Carrie Fisher as Leia Organa. This movie was the iconic actress’ last work before she passed away in December last year. Leia nervously anticipates her son’s next move at the helm of her flagship. She can see he’s capable of using his Force and he looks hesitant to kill his mother. Whether he shoots or not will be revealed when the movie releases in December.

We get a shot of the most anticipated rematch between Finn and Captain Phasma, after more battle scenes and a second of Poe Dameron without his X-Wing. Finn is wearing a First Order uniform, which has resulted in the eruption of many theories. While Finn’s storyline has been kept under wraps, it’s hinted that he’ll be doing an undercover mission. But for whom?

There are shots of Supreme Leader Snoke’s flagship, Supremacy in battle and the inside that’s carrying his army. Luke’s seen injured on the ground in one scene. Has he been attacked by an enemy, or did he get floored by Rey’s Force?

For the finale, we see the Supreme Leader in the flesh, sans mask and looking extremely creepy. We also get an idea of his endgame through the trailer —and it’s got nothing to do with Kylo. Nope, this man wants Rey and he’s torturing her.

To close the trailer, we have an emotive Rey asking for “someone to show me my place in all this.” Enter Kylo and his outstretched hand. The feels! Okay, not sure if these shots are from the same scene but one can hope, can they not?

We’ll find out soon enough when Star Wars: The Last Jedi releases on December 15. In the meantime, check out the official trailer below!