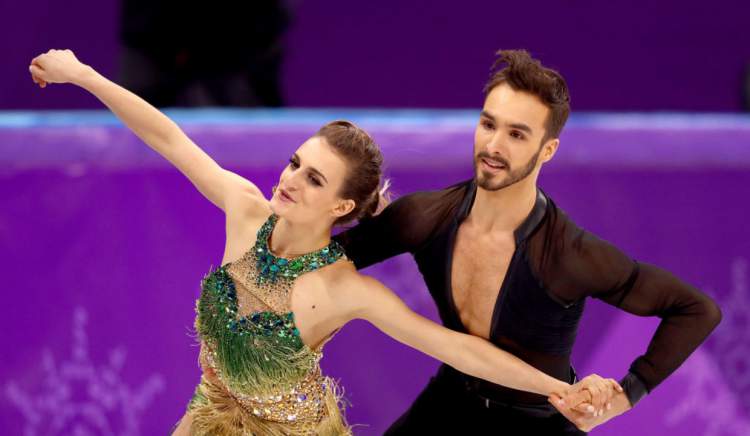 It was Gabriella Papadakis’ worst fear, and unfortunately, it came true. She was performing her figure skating routine with her partner, Guillaume Cizeron at the Winter Olympics 2018 when the unthinkable happened for the world to see; her dress malfunctioned and her breast was exposed, but she bravely carried on through their routine. The images aired all over the world, but Papadakis still managed to win the silver medal. Hats off to the brave young lady!

Gabriella Papadakis’ worst nightmare came true on Monday, February 19, 2018, when she suffered a wardrobe malfunction while performing at the Pyeongchang Winter Olympics Games 2018.

Papadakis was in the midst of her routine with her partner Guillaume Cizeron, when one of her straps snapped and her breast popped out of her shimmery green top. Unfortunately for her, the incident was captured live on TV for viewers all over the world.

The camera was focused on Papadakis, who was not in a position to cover herself as she was in the middle of a midline step sequence. Her wardrobe malfunction found its way into the homes of millions of viewers, though broadcasting networks did their best to censor the “nip-slip.”

A Show of Courage

But all credit goes to Papadakis; she held her nerve and gamely carried on as nothing happened. (And until the news went viral, there were many who hadn’t even noticed!) They still earned a score of 81.93 and came second to Canadian pair, Tessa Virtue and Scott Moir.

Later, Papadakis told the Associated Press, “It was pretty distracting, kind of my worst nightmare happening at the Olympics. I told myself, ‘I don’t have a choice. I have to keep going,’ and that’s what we did. I think we can be proud of ourselves being able to deliver a great performance with that happening.”

Papadakis trained in the same costume throughout the week, and nothing went wrong. It was sheer bad luck that the dress malfunctioned while she was on the ice, fighting for the gold medal. She said, “I felt it right away and I prayed. That’s about what I could do.”

Also Read: 5 Memorable Moments from the 2018 Winter Olympics So Far!

Panic in the French Camp!

The funny thing was that while Papadakis and Guillaume were cool about the malfunction and made the decision to keep going, the French team’s camp was in an uproar. They were wondering, “Do we scream and stop the music? What do we do?”

Winning Silver—and the Respect of the Masses

Thankfully, the courageous young lady took it on her chin and continued. Not only that, she even took home the silver medal! No wonder everybody is admiring her temperament and composure for handling this incident in such a dignified way. Seriously, give it up for Gabriella Papadakis! (If it were us, you know we’d be cowering in a corner right now, trying to change our identity.)

You can watch Papadakis-Cizeron’s wardrobe malfunction video below: