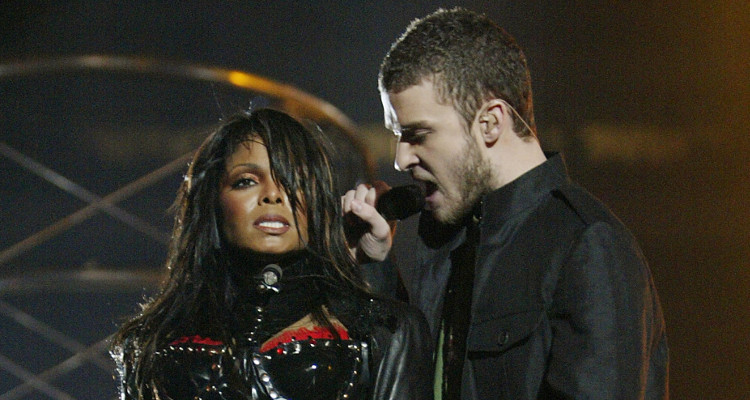 In case you have no clue about what happened to Justin Timberlake and Janet Jackson at the Super Bowl, then keep reading.

For many years, artists have taken over the stage during the Super Bowl halftime show to entertain viewers with their performances. The February 2004 Super Bowl was no different when singer Justin Timberlake and Janet Jackson were invited by the National Football League and MTV to perform at the Super Bowl XXXVIII halftime show.

Jackson sang and performed “All for You,” “Rhythm Nation,” and also a part of “The Knowledge.” Timberlake was a surprise guest at the halftime, and both performed on “Rock Your Body.”

When Timberlake sang the lyric, “I’m gonna have you naked by the end of this song,” he ripped open her costume, which resulted in her right boob being exposed to millions of viewers. But after the incident, Jackson apologized and explained that it was purely accidental and not intended. She further explained that Timberlake was only supposed to pull the costume while leaving her bra intact.

Jackson said, “The decision to have a costume reveal at the end of my halftime show performance was made after final rehearsals. MTV was completely unaware of it. It was not my intention that it go as far as it did. I apologize to anyone offended—including the audience, MTV, CBS and the NFL.”

Timberlake also apologized and said, “I am sorry if anyone was offended by the wardrobe malfunction during the halftime performance at the Super Bowl.” He continued, “It was not intentional and is regrettable.”

Is Janet Jackson Banned from the Super Bowl?

Who really matters. ✊?The only icon. The legend. The one who built the house these artists live in. The blueprint. The one who NEVER WAIVERS and NEVER BACKS DOWN. The true Phoenix. A living testament of how staying true to yourself and your craft can guide you and lift you up. She will always win. #JusticeForJanet ? #SOTW #StateOfTheWorldTour . . . #janetjackson #JJ #janfam #jtribe #janettour #keeptheconversationgoing #queenofpop #rhythmnation #thevelvetrope #allforyou #control #20yo #discipline #janetalbum #dreamstreet #unbreakable #sotw #designofadecade #numberones #jackson #legend #legendary #queenofpop #icon #stateoftheworld

The wardrobe malfunction incident caused a lot of controversies and a lot of people were furious. Furthermore, the Federal Communications Commission not only penalized a lot of companies involved but the investigation on this incident continued for eight years.

After the incident, it was reported that CBS allowed Timberlake to be a part of the 46th Grammy Awards ceremony. However, the network did not let Jackson attend the ceremony.

Justin Timberlake will be performing at the Super Bowl Halftime show in February 2018. 14 years after the infamous incident, Timberlake will take the stage again. As of now, there is no news about Jackson being banned from the Super Bowl. There were rumors that probably Jackson was banned, but till now the rumor has not been confirmed by anybody. Talking about the Super Bowl, Timberlake said, “What I really want to do is take the opportunity to put together a performance that feels like it unifies.” He further added, “I feel like that would be the ultimate accomplishment, and then the icing on the cake is at some point within that 12 minutes that everybody is shaking their booty.”

Since the news has come out about Timberlake performing, many fans are furious and expressed their annoyance on social media. They are angry because Jackson has not been invited on the stage and started the #justiceforjanet on social media.

One user wrote, “Not to be negative, but why is Justin playing the superbowl and Janet is still blacklisted? @NFL.”

Another one wrote, “I love @jtimberlake , but I sure hope that @JanetJackson gets an apology and maybe some performance time… #justiceforjanet.”

In case you have not watched the infamous Justin Timberlake and Janet Jackson malfunction video, then follow the link below.