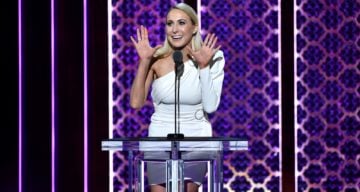 Nikki Glaser is on fire! She was hilariously savage on The Comedy Central Roast of Alec Baldwin and is set to release her Netflix special, Nikki Glaser: Bangin’, on October 1. In the run-up to the Netflix stand-up special, Glaser appeared on The Howard Stern Show where she got candid about her most recent hookup with Bobby Bones. The comedian is very honest about her personal life and how it influences her material. You can see that by how she includes her family in her stand-up content. Nikki Glaser’s family and relationships have a part in her comedy, which is why we’ve revealed details about both right here.

Nikki Glaser’s Family Is from Ohio

The Glasers later moved to St. Louis, Missouri where Nikki was raised. Nikki’s family still resides in St. Louis, where her sister, Lauren Glaser Green, is a Spanish teacher at a local high school.

On her new Netflix special, Nikki talks about growing up alongside her pretty sister and turning her insecurities into comedic material. It’s not the first time she’s joked about it, either.

As she once said, “My sister was very, very beautiful and I was very not. Doing comedy is the greatest thing ever because you don’t have to do that, and I’ve since learned to let go of that.”

The subject of sex features prominently in Nikki’s comedy, partly because her parents have an unabashed outlook on it. Though she has her way of surprising even them.

We can, of course, never forget that iconic moment from Not Safe with Nikki Glaser where she hooked her parents up to a lie detector and grilled them about their sex life. True to what we’d expect from Nikki Glaser’s parents, they provided some of the most hilarious episodes of the show.

Nikki Glaser’s Father Is a Musician

In St. Louis, Nikki’s father goes by EJ Glaser, a musician with the acoustic band Glaze and the Moonkings. EJ is the guitarist and vocalist of the band, also comprised of Dave Moon and Jim King Jason Cassidy, and has been active since 2017.

EJ has also been Nikki’s biggest fan, supporting her throughout her comedic career. And she also credits him and her mother for influencing her comedy.

“My dad is good at talking s**t about people and making fun of them, which is one of my family’s favorite past times. We can be very mean together, but it’s always behind closed doors, so no one gets hurt,” said Nikki.

Glaser does talk about her sex life in her no-holds-barred comedy, but she keeps details about her relationships private. For a long time, she dated TV producer Chris Convy, who has co-produced some of Glaser’s works.

Apart from making some red carpet appearances together, this couple remained low-key. But it seems they might have broken up.

Glaser appeared on The Howard Stern Show last week, where she admitted she hooked up with radio host Bobby Bones. And it may have been while since Convy was her boyfriend.

Both Bones and Glaser competed in Dancing with the Stars season 27 in 2018, where she was first to be eliminated and Bones won the season. However, while they were on the show, she claims they had a minor affair.

She and Bones spent time together and, as she told Howard Stern, there was “some light petting” involved. But before they could take their relationship further, Glaser claims she wanted to cleanly end things with her then-boyfriend. She didn’t name the boyfriend on the show, but it’s speculated she’s referring to Convy.

So Glaser broke up with her boyfriend to work things out with Bones. However, she told Stern, “as soon as I close up the ex-boyfriend thing guess who doesn’t want to hang out with me anymore.”

Glaser further added that they didn’t keep in touch after she was eliminated from the show.

You can watch Nikki Glaser narrate her hookup story with Bones here.