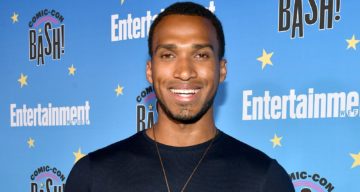 The Boys is a gritty take on the superhero universe that premiered on Amazon Prime on July 26. Adapted by Seth Rogen, Eric Kripke, and Evan Goldberg from the comic books of the same name, the series showcases a world where a group of regular guys try to put an end to the corrupt corporate superhero business with no accountability. Nathan Mitchell portrays Black Noir, the silent and enigmatic masked hero who is part of The Seven, the premiere team of heroes. It might be the dream role for Mitchell, who not only has some superhero skills in real life, but also is a die-hard fan of superheroes. Black Noir may be mysterious, but our Nathan Mitchell wiki has everything on the man behind the mask.

Nathan Mitchell Is from Canada

Nathan Mitchell was born on December 6, 1988, and raised in Mississauga, Ontario in Canada. He is of Trinidadian and Jamaican descent. His father is one of seven children who were raised in Trinidad.

According to Mitchell, his grandfather took a keen interest in his children’s studies so they’d make it into a good school outside of Trinidad. His grandfather also turned his car into a taxi to pay for Mitchell’s father’s college tuition.

Last week, after 92 years of full life and 70 years of loving marriage my grandfather Daddy Pato passed away. He was born with nothing. He and his wife Lena raised their seven children in a village where you had to walk to a pipe to get water. They shared beds and ate meals off the same plates. They had a happy life, but he was determined to give his children an opportunity for a better one. He tirelessly taught them extra lessons before and after school to make sure they had the grades to get into post-secondary school outside of Trinidad. When my dad couldn’t afford university Daddy Pato turned his car into a taxi after long days of work to pay for his tuition. He went above and beyond for his children, his grandchildren, and those in his community. A few years ago my cousin was walking through the old neighbourhood in Trinidad and someone was able to recognize who's grandson he was. 30 years later. After all his children were settled in their lives Daddy Pato retired from teaching and bought himself a car. All he wanted to do was drive it around the countryside and enjoy his retirement in peace. But not long after he suffered a stroke. He was paralyzed and given 3 days to live. But with the support and determination of his wife he regained mobility in half of his body and outlived the doctor who diagnosed him. That was 31 years ago. In all my years I have never heard anger, bitterness, or resentment coming from him. He was a peaceful soul. He gave others everything he had and when his health was taken from him, he accepted it with grace, humility, and dignity. He was a wise man. He was a great man. But most importantly he was a good man. And none of us would be here without him. Love you Daddy Pato. Thank you. Rest in Peace.

Mitchell grew up alongside two sisters, Nyla and Maya. From his Instagram, we can see that he has a lot of admiration for his sisters and mother.

Mitchell Is a Tae Kwon Do Champion

From a very young age, Mitchell was passionate about drawing, basketball, and Tae Kwon Do. He devoted 10 years of his life to the martial art and received a black belt in it.

He practiced it competitively, too, winning a gold medal at the National Sparring Championships at the age of 15 and qualifying for the World Championships. Unfortunately, his Tae Kwon Do days were cut short with an ankle injury.

It may not have worked out for him, but maybe we can see some of Mitchell’s Tae Kwon Do moves on The Boys.

Mitchell Switched from Art to Acting

While Mitchell recovered from his ankle injury, he took time away from Tae Kwon Do and basketball. That allowed him more time to focus on art and drama.

When he was a boy, his parents didn’t allow him to watch shows like Power Rangers, which they deemed too violent. Though he didn’t get to watch them on TV, he held a fascination for those characters and would draw them.

His artistic skills got him accepted into Cawthra Park Secondary School, an institution specializing in arts, sports, and academics. With more time for drawing and drama, Mitchell soon discovered acting was a lot more fun.

So he switched his focus from art to drama in school and hasn’t looked back since. He went on to acquire his BA in radio and television from Ryerson University in Toronto in 2012.

He moved to Vancouver the following year, where his acting career took off. He now resides in the U.S. with a thriving career.

Mitchell Has Appeared on Supernatural

Mitchell has appeared in multiple TV shows as a guest. But some of his major credits include prominent recurring characters in Supernatural, Psych: The Movie, and Arrow. He’s also appeared multiple times on iZombie as unnamed characters.

He also featured in Selena Gomez’s music video, “It Ain’t Me,” with Kygo.

The Boys is Mitchell’s first breakout role as a main character. He portrays Black Noir, a member of The Seven, a team of corporately run superheroes who are more like villains.

Mitchell’s connection with superheroes goes way back. He not only kicks butt with Tae Kwon Do and loves drawing heroes, but he also dresses up as a superhero pretty much every Halloween.

His Instagram posts from past Halloweens include Superman, Spider-Man, Batman, Iron Man, and even, ingeniously, Spider-Man dressed as Batman. He also hangs around with his friends wearing his Spider-Man mask.

And besides appearing in Arrow, he also appeared in the 2016 reboot of the 1976 superhero comedy series, Electra Woman and Dyna Girl.

While Black Noir and his fellow heroes aren’t exactly heroic, this might be a dream come true for Mitchell.

Black Noir & Seth Rogen: The Team Up movie you never knew you needed. 🎥🎞🍿