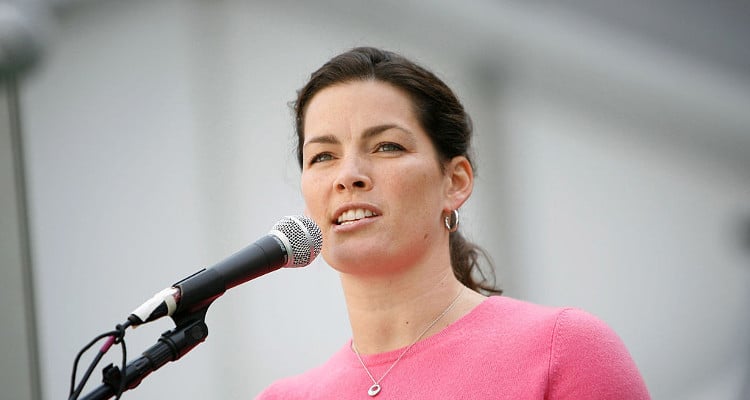 Nancy Kerrigan’s life has been full of struggles, achievements, and positivism. Despite a blow to her knee which almost crippled her, Kerrigan came back and won a silver medal at the Olympics. Today she is dancing with enthusiasm and grace on Dancing with the Stars season 24.

Dancing is not a new thing for Nancy Kerrigan. She was doing it way back in the early 1990s when she was a figure skater who represented the United States at several prestigious global competitions including the Olympics. Kerrigan was the 1992 Olympic Bronze winner, the 1993 U.S. National Champion, the 1994 Olympic Silver medalist, and a two-time world medalist forcibly quitting. This was because, in 1994, Kerrigan was attacked by an assailant hired by the ex-husband of her rival Tonya Harding, who hit Kerrigan’s knee with a baton. Watching Nancy Kerrigan on Dancing with the Stars has people everywhere admiring the fighting spirit of this athlete. So what does Nancy Kerrigan do now? Here is everything we know about her and what is going on with Nancy Kerrigan now.

A Natural at Figure Skating

Nancy Kerrigan was born on October 13, 1969, in Stoneham, Massachusetts, to Brenda and Daniel Kerrigan. Daniel was a welder and sometimes worked three jobs to fund Kerrigan’s skating career. She took to skating at the young age of six, and practiced hard as she rose to prominence when she qualified for the national level. Kerrigan was at the top of her game when she was attacked and put out of action. Though she participated in several prestigious events after the attack, her career was never the same again.

Check out that bling for Vegas night at #dwts. Thanks everyone for your support!

Now, Kerrigan is once again in the news as a contestant on Dancing with the Stars season 24. Nancy Kerrigan’s DWTS partner is professional dancer Artem Chigvintsev. How old is Nancy Kerrigan? Kerrigan’s age is 47, and she still has the enthusiasm and passion that she had at the peak of her ice skating career. She has spoken at length about her troubles in her personal life during last week’s (April 10) DWTS episode, and spoke about her miscarriages and eating disorders.

A String of Miscarriages

Nancy Kerrigan’s miscarriages were very serious and almost broke down her self-confidence. In an interview with Good Morning America, Kerrigan revealed that she had six miscarriages in eight years and it had a devastating effect on her mental psyche and marriage, “It’s devastating and so hard on your marriage. You think ‘What’s wrong with me?’” Kerrigan admitted that she blamed herself thinking, “People have babies every day. This is such a natural thing. Why would I keep losing a baby? What did I do wrong?” Kerrigan said that she had a hard time explaining to her son what went wrong every time she had another miscarriage. She wanted three kids, and eventually, it all worked out. Today, Kerrigan has three children: Matthew, Brian, and Nicole.

Great to be on set with all the celebs and dancers last night. . Great energy here with the cast! @theartemc #DWTS

Kerrigan also revealed that she developed an eating disorder when she was trying to fight the stress caused by the blow to her knee back in 1994. She felt that everything was “out of control” at that time and began to eat less and less, “I would avoid food because it was something I could do. I felt I could control that and nothing else. I don’t know why but that seemed like an accomplishment.” Nancy Kerrigan’s eating disorders were traumatic, but with help and courage she overcame them. She is now a devoted mother to her three children and a wife to her agent Jerry Solomon. She still has a passion for figure skating and has recently appeared on Colgate Skating & Gymnastics Spectacular in February 2017. Kerrigan’s life has been a journey of hard work, determination and accomplishments and she continues to win hearts with her smooth dance moves on Dancing with the Stars season 24.