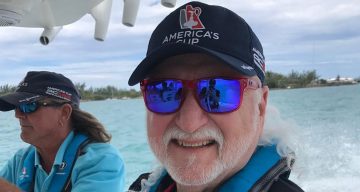 Michael Fux and his family immigrated to the U.S. from Cuba when he was young, and he has since risen from his very humble beginnings. In 2018, reports say the successful entrepreneur now boasts an estimated net worth of $200.0 million, not to mention his unbelievable car collection. With that net worth, Fux claims that President Trump’s proposed tariffs on imported cars (which would increase the price by almost $200,000) won’t affect him. Speaking of cars, 74-year-old Fux just became the proud owner of the first British-made McLaren Senna worth $1.3 million!

Michael Fux was born in Cuba. His family was impoverished, and they migrated to the U.S. in 1958, when Fux was just 15 years old.

The family’s initial struggles included living in a one-room apartment in Newark, New Jersey. It was a seven-story walk-up with no air conditioning. They had furniture from the Salvation Army and Fux only had one pair of shoes.

But young Michael Fux was ambitious.

Wanting to make a better life for himself, he started his first business when he was 17. It was a used battery and tire shop.

Fux began bargaining with local auto repair shops to sell him their used batteries and tires. Then, he would recharge the batteries or scrape them for lead, and he resold the tires after recapping them.

“I found a two-car garage for rent and got tire breakers for free from a company that had gone to automatic ones,” recalled Fux.

He had no money or opportunity to go to college, but he had a knack for business. From his small shop, Fux built multiple ventures. And by his 20s, he had bought and sold a few different businesses.

The young entrepreneur eventually entered the retail business, selling automotive supplies at Sears. Soon, he rose to the position of manager.

Fux built up his management skills working at department stores like Bamberger’s and Sanger-Harris. At 30, he was working with the former department store chain, Hecht’s, before he left it to form his own business.

He Built a Fortune in the Mattress Industry

Many would stuff cash in mattresses, but Michael Fux put his money in the mattress business in a much different way. The entrepreneur experimented with different industries until he settled in the memory foam mattress industry and made millions.

A stint at a Japanese linen company inspired him to invent the zippered blanket he dubbed the “ësnuggle” bag. The product earned $72.0 million in sales in its first year! The business, however, went bankrupt after just three years.

But Fux was able to learn from what went wrong and learn from his mistakes. He certainly wasn’t one to give up, so he went back to retail as a carpet buyer for a Broadway Department Store in L.A. He came up with a brilliant idea—a deferred billing plan for customers!

On set shooting my first TV commercial. Can anyone guess my new product!? #michaelfux

“Everyone thought I was crazy, but I convinced suppliers and my manager to offer six months deferred billing on carpeting. I paid the interest,” he explained and added, “There was a huge response to the first ad. We had lines around the block.”

His unusual business model proved to be a success and he was able to start MFA Marketing. The business imported rugs and other products from India and made half a million in profits on his first order alone.

Things were going great when another opportunity hit in 1985. His sister-in-law, an employee at mattress manufacturer BioClinic invited him to help the company expand beyond the hospital sector (who they manufactured egg crate mattresses for).

Fux signed on and brought BioClinic into the consumer market. In two years, he had earned the company almost $80.0 million in business dealings.

When the company was sold, Fux took what he learned about bedding technology to start his own company called Sleep Innovations. It manufactured mattresses, pillows, and toppers with convenient packaging.

“Creating something from nothing like that was what really gave me great pleasure,” said Fux.

That’s when things slowed down for Fux and he decided to put much if his energy into focusing on giving back. But after sitting out for five years, the restless entrepreneur was back in the industry.

He founded Comfort Revolution in 2011 in Newark, close to his childhood home. The company manufactured mattresses, toppers, and pillows, made of memory foam and Fux’s own patented gel technology.

It wasn’t long before bigger investors came knocking, and Fux sold a minority interest of the business to mattress giant Sealy. Shortly after that, they began producing mattresses for big names like Sealy Posturpedic, Stearns & Foster, and Bassett, allowing him to go international.

Since then, Comfort Revolution opened a 432,650-square-foot manufacturing and distribution facility in Belmont, Missouri and created at least 200 jobs in 2013. He was happy to report that they were producing very little in China at that time. His goal was to eventually have everything produced on U.S. soil.

An avid auto buff, Fux dreamed of owning the finest cars since he was five years old. When he was young, he would even “help” his grandfather to steer his taxi.

His passion grew as he did, and he often bought “clunkers” because that was all he could afford. He swore one day he’d be able to buy all of his dream vehicles.

Fux’s first car was a 1949 Dodge Coupe. His first high-end car was a BMW worth $100,000. Now, his collection includes over 160 vehicles, including some of the most limited edition luxury, performance, and functional models.

Some of the highlights (some in multiples) from this auto addict’s fleet include Aston Martin DBS’s, Phantom Drophead’s, a Lamborghini Murcielago, a Lamborghini Aventador, a Spyker C8 Laviolette, a Mercedes SLR McLaren, an Alfa Romeo, a Saleen S7, a Ferrari Enzo, a Ferrari F12, a McLaren P1, a Bugatti Veyron.

Fux also has around 25 Ferraris, a Porsche Carrera GT among 12 other Porsches, and six Rolls-Royces.

His $2.0 million Ferrari FXX is one of just 30 in the world! But it’s his latest car purchase that has put him in the news again!

Fux recently bought the first McLaren Senna worth over $1.0 million! It is one of only 500 units presold. It was delivered to the first owners on July 17—Fux reportedly being the first!

A casualty in his collection was one Ferrari Enzo. The beauty, one of 400 ever made, was wrecked to ruination when a mechanic took it on a test drive, lost control of it, and crashed into a bridge wall. Both mechanics in the Ferrari survived, relatively unscathed.

But the Senna, built to be a beast on the racetrack, will not be putting all that horse-power to use. In fact, most of Fux’s candy-colored fleet sits in garages in different parts of the country, the largest fleet being at his Milford, New Jersey estate.

He has a special staff to take care of his cars. Depending on the make, the maintenance of each car costs more than $8,000, and insurance is a lot more!

Fux sees every machine as a “piece of art” that will never lose its value, but he rarely drives them all. He usually brings them out on display for charity events and goes around in a chauffeur-driven white Rolls-Royce Phantom.

He’s known to have a garish aesthetic taste for his cars. So, car companies customize and patent the color of the body to fit his fancy. Rolls-Royce once engineered the purple hue of a pansy flower that caught Fux’s attention for the Phantom he had ordered. In fact, Rolls-Royce has an exclusive line of patented paints named after Fux!

McLaren borrowed the exact paint formula from Rolls-Royce to match the Spider he bought, too. The two companies did the same thing to match their cars to an orchid he liked as well. The emerald green Senna was also painted based on the patented green color of one of Fux’s leather shoes.

One of his most notorious custom paint jobs is a mint green Rolls-Royce Wraith that’s painted both inside and out.

His Home Is on an 85-Acre Estate

Fux has a home that matches his massive car collection in Milford. The sprawling 85-acre estate has a 6,000-square-foot mansion and four hangar-sized barns totaling 30,000 square feet of garage space.

The main home has four bedrooms and bathrooms and a restaurant-style kitchen. The property also includes a basketball court, a sauna, and a commercial kitchen.

Fux currently resides in Manhattan’s One Beacon Court, where the Senna was delivered. The Midtown building (where Beyoncé once had a home) has houses prized between $7.0 and $26.0 million.

Also Read: What is Richard Rawling’s Net Worth?

He Ventured into the Beverage Business

Positive Beverage, LLC received a sizable investment and partnership from Fux in 2015 to expand their brand.

The Delaware-based company said in a statement, “Michael Fux brings expertise and innovation to our business, as well as critical funding, so that we can not only enter, but thrive within the market!”

Working his way up the ladder from nothing to fulfill his dreams inspires Fux to give back to the underprivileged. He founded the Michael Fux Foundation to fund other charitable ventures.

The foundation has donated to the Breast Cancer Research Foundation, Operation Smile, the Make-A-Wish Foundation, and others. It has also invested $20.0 million in the research of childhood illnesses.

One of the biggest benefactors of his philanthropy is the Miami Children’s Hospital. He built a state-of-the-art facility within the hospital for the families of ill children, equipped with an entertainment center, a movie theater, massage facility, and a workout room. He also donated Christmas gifts to about 400 families there.

Michael Fux even brings out his car collection for the sole purpose of charity. He plans to convert his auto collection into a museum whose admission proceeds will go to the hospital.