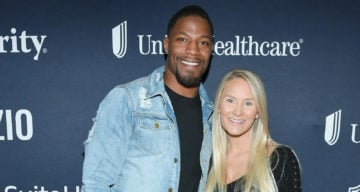 With the Arizona Cardinals rebuilding their team, star running back David Johnson could be considered the most important player on the roster. David Johnson and his wife, Meghan Brock Johnson, are an invaluable presence in the Cardinals nation. That’s why we’re turning the spotlight on David Johnson’s wife in our Meghan Brock wiki.

They Met at University of Northern Iowa

She goes by Meghan Johnson now, but she was born Meghan Tara Brock on March 1, 1993. The 26-year-old hails from Cedar Falls, Iowa. She graduated from Cedar Falls High School, where she was a cheerleader.

(Editor’s Note: For the purposes of this article, we’ll refer to Meghan Johnson by her maiden name, Brock.)

David Johnson, 27, was born in Memphis, Tennessee and grew up in Clinton, Iowa. Despite a stellar football record at Clinton High, Johnson only had two scholarship offers, to Illinois State and Northern Iowa.

They met at a house party on Brock’s 19th birthday. Johnson courted her during the health promotion class they had together. They have been together since September 2012. Throughout their dating life, they were workout buddies and traveled often with their friends.

Back when they first got together, Brock had no clue about football. She didn’t even know Johnson played the sport at first.

Brock and Johnson were dating when David Johnson was picked by the Arizona Cardinals in the 2015 NFL Draft. The college sweethearts got engaged in June 2015 and tied the knot the following year, on April 8, 2016.

Because my timeline reminded me this was 6 years ago. There is truly nothing I miss more about high school than cheering. 😩💔 (especially now that I'm 6 months+ pregnant and on a good day can tie my own shoes 😉) #cfhs #gotigers

Meghan Brock Is a Certified Nurse

After graduating from the University of Northern Iowa, Brock did a nursing course at Kirkwood Community College in Cedar Rapids, Iowa. She graduated from an LPN (Licensed Practical Nurse) program as a certified nurse.

She previously worked at NewAldaya Lifescapes, a retirement community in Cedar Falls.

Johnson and Brock are now based in Arizona where Johnson plays for the Cardinals. It’s unclear if Brock’s currently working as a nurse or is otherwise employed, other than being a mom now, of course.

So proud of @meghantara for graduating her LPN program!

She Had a Difficult First Pregnancy

A few months after their 2016 wedding, Johnson and Brock announced they were going to be parents. They shared details from Brock’s pregnancy on their respective social media accounts, including the few Cardinals games a pregnant Meghan Brock attended. (Brock did a social media detox and deleted her old Instagram profile. But has a new account she posts on occasionally.)

Brock’s pregnancy wasn’t the smoothest. She suffered from preeclampsia, a serious blood pressure disorder that was a hot topic during Kim Kardashian’s first two pregnancies.

But the couple handled their pregnancy challenges with a sense of fun. Like many pregnant women, Brock’s feet were too swollen to fit in her shoes comfortably. At one point, the couple had gone to the movies to watch Moana. But Brock’s ankles were so swollen, she couldn’t walk. So Johnson carried her home and tossed her in the heated pool of their home to help the swelling subside.

They also had a scare with a football injury not long before Brock’s due date.

She watched her husband’s games on TV, so Brock saw the moment on January 1, 2017 when David Johnson was injured, after which he was out for the rest of the 2016 season.

But the momentary panic about Johnson’s knee injury was tempered by anticipation for their child’s arrival. The Cardinals scheduled around Johnson’s recovery and Brock’s due date.

The couple welcomed their son, David Jerome Johnson Jr. (or DJ, as his parents would call him), on January 14, 2017.

Both Brock and little DJ suffered a few complications after delivery. Brock was on bed rest, while DJ spent a few days in the NICU.

The couple shared the ecstatic news on Instagram about their new son the day they were discharged.

And the Johnson brood is getting bigger now! The couple is expecting their second child this year.

Meghan Brock and David Johnson shared a desire to help children in need and wanted to do something about their common passion. They volunteered at children’s hospitals together, but their life changed when their son was born.

The experience of seeing DJ spend the first few days after his birth in the NICU made the new mom and dad realize that a lot of parents and children go through this time of fear and difficulty.

They have since founded Mission 31 Foundation (Johnson wears the no. 31 jersey with the Cardinals). Their organization raises funds for children who are battling medical conditions.

The Foundation led to the formation of David’s Locker, which aims to bring fun and joy as well as stress relief to children and families in hospitals by providing video games and other electronic gadgets to them.

With their parents being such good examples, we’re sure David Johnson and Meghan Brock’s children will one day also contribute to society in charitable way…and maybe, just maybe, play football?