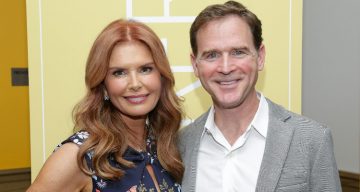 Mark Burnett is one of the most decorated Hollywood producers behind our favorite shows like The Voice and Shark Tank. Now, he’s undertaking a new project together with his wife, Roma Downey.

Mark Burnett and Roma Downey’s latest venture is an inspiring and motivating one. The award-winning MGM producer and the critically-acclaimed actress are bringing their talents to the digital medium. Mark Burnett’s wife is particularly lauded for her charitable efforts. Find out all about this actress with a heart of gold in Roma Downey’s wiki.

From Arts to Performing Arts

Maureen O’Reilly, Downey’s father’s second wife, was a homemaker with a passion for performing. Downey was 10 years old when she lost her mother to a heart attack, and her father passed away when she was 20.

At school, she excelled in her studies and loved to read and paint. Her favorite after-school extracurricular was, of course, drama.

Downey’s father was a teacher who left his school job to work as a mortgage broker. He raised her single-handedly. His much older children from his first marriage had moved out for work or marriage when Downey was a child.

When he was ailing, Downey wanted to stay behind and look after him. But he insisted she go to England to pursue her degree in arts.

Downey initially planned to be a painter while she pursued a bachelors degree at Brighton Art College. While there, she was drawn to drama. So, with the financial support of a friend, she went to the London Drama Studio.

"I tell of hearts and souls and dances… Butterflies and second chances; Desperate ones and dreamers bound, Seeking life from barren ground, Who suffer on in earthly fate The bitter pain of agony hate, Might but they stop and here forgive Would break the bonds to breathe and live And find that God in goodness brings A chance for change, the hope of wings To rest in Him, and self to die And so become a butterfly." Karen Kingsbury, Oceans Apart ??????????????#butterflies #butterfly #karenkingsbury #boxofbutterflies #romadowney @karenkingsbury #discoveringtheunexpectedblessingsallaroundus

Downey’s professional career began in theater. After acquiring notable credits on Broadway, she played the iconic Jacqueline Kennedy Onassis in the Emmy-winning TV series, A Woman Named Jackie. That role led to her most famous credit, the angel Monica on CBS’ Touched by an Angel. Through that show, she struck a lifelong friendship with her co-star, Della Reese.

Downey produced the History Channel’s critically-acclaimed docudrama, The Bible, where she played Mary, the mother of Jesus. The movie paved the way for a theatrical release of Son of God.

She went on to produce and star in more critically-acclaimed faith-based shows with Mark Burnett. They founded the film and television group, United Artists Media Group, which now operates under MGM’s umbrella. Together with MGM, the 57-year-old and Burnett launched LightWorkers, a digital platform to share positive and inspiring stories.

Mr and Mrs B out for a bite of lunch on an Autumn day ?? #autumn #mrandmrsb #lunchdate #marriage #edun

During the days when she was a theater upstart, Downey fell in love with her American classmate, Leland Orser. Yes, the actor who played Dr. Dubenko on ER.

After her father’s death, Orser and Downey married in New York. But, their marriage didn’t last long, and Downey kept herself afloat working in an Upper West Side restaurant.

When she found success with Touched by an Angel, she met director David Anspaugh on a blind date. They married two years later and had a daughter. Downey named her Reilly, after her mother’s maiden name.

Anspaugh was diagnosed with clinical depression, which led to the breakdown of their marriage. The couple divorced when Reilly was 22 months old.

In 2004, she began dating Burnett who had two children, James and Cameron, from a previous marriage. He proposed to her on Thanksgiving Day in 2006, when they were vacationing with their children in Mexico. They tied the knot in 2007 at their Malibu home. James and Cameron were best man and ring-bearer respectively, and Reilly was a bridesmaid.

Mark Burnett is now the president of MGM Television and Digital Group. And together with his wife, the duo produce successful faith-based shows. They currently balance their marriage and home while working on LightWorkers.

You must remember this A kiss is still a kiss, a sigh is just a sigh The fundamental things apply As time goes by And when two lovers woo They still say, "I love you" On that you can rely No matter what the future brings As time goes by ❤️#astimegoesby #louisarmstrong #akiss #cornwall #mrandmrsb #kiss ?????????