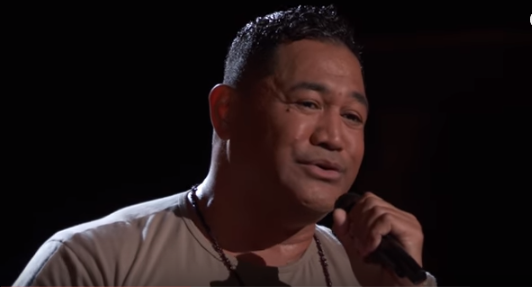 Esera Tuaolo’s The Voice stint has made him grab headlines once again. Advocate of the LGBT community, the footballer has been able to juggle talents we didn’t even know he had! Instead of earning fans on the field, he’s earning fans on stage and The Voice is the perfect platform to do it on. Learn all about him, right here in our Esera Tuaolo wiki.

Esera Tuaolo, a former NFL defensive tackle is in the news again, but this time, not for anything sports related. This time, “Mr. Aloha” as he is nicknamed, is using the platform of The Voice to wow his fan with his singing prowess. However, this isn’t the first time that many have gotten to witness his voice. Keep reading our Esera Tuaolo wiki to know about the former NFL footballer, gay activist, and singer all rolled into one.

Samoan by ancestry, and born in Honolulu in the Hawaii, Esera Tuaolo’s age is 49. He currently resides in Minneapolis, Minnesota.  He has twins by the names, Mitchell and Michele. Tuaolo is known for his philanthropic work and is an ardent advocate for LGBT rights. He hates bullying and runs an anti-bullying program known as Hate in Any Form is Wrong. He is also known for cooking food and whipping up some yummy dishes on the go.

A Champion of the LGBT Community

In the year 2002, when Taolo retired from professional football, he answered that one question that was on everyone’s minds. Is Esera Tuaolo gay? Well yes, he is and that makes him the third formal player in NFL who went public with the announcement, after David Kopay and Roy Simmons. Since then, Taolo has been a very strong advocate for the rights of the LGBT community and has worked with several organizations in this regard.

Tuaolo has been in the league, as well as a board member of Gay and lesbians Athletics Foundation, in order to do-away with homophobia. His advocacy includes promotion of his stance on the subject and ensuring that there is a safe and secure environment for the community members, apart from granting them equal rights in all respects. He’s been regular on talk shows like Good Morning America and The Oprah Winfrey Show to speak more on the topics and remove as much bias as possible from people’s minds. Esera Tuaolo, who once played in the NFL, has also been very vocal about the reality of the community and utilizes the platform to further educate people and fans.

The Talented Tuaolo’s Net Worth

Apart from being a football player, Tuaolo also writes. He published his autobiography in 2006 titled, Alone in the Trenches: My Life as a Gay Man in the NFL. In this book, he wrote about all the experiences that he had while he was growing up in poverty. He also wrote about his sexual orientation and the role that football had in his life. The book sheds light how various events in his life had made him the man he grew up to be.

Adding another feather to his cap of accomplishments, Tuaolo was also a part of the hit TV series, Hawaii Five-0 in 2013, where he played the character of a civic centre employee. In another movie called Factotum, which was released in 2005, he acted the role of a bartender at Laura’s Bar.

Esera Tuaolo’s net worth was once estimated at $19.0 million, but that cannot be confirmed as of lately. No longer playing in the NFL, it’s likely his net worth took a dive but exact amounts at this time are not known.

He’s Had Some Trouble with the Law

It was in 2010, when Tuaolo was arrested on charges of domestic assault on his then-boyfriend. He was released on $2,000 bail. The incident garnered a bit of media attention and appearance in court, but the prosecutor later dismissed the charges against the 6’4” tall footballer.

But that isn’t immediately what people remember about him, and now, with his strong views on the LGBTQ rights and his public journey on The Voice, it certainly won’t be the last! Esera Tuaolo’s Superbowl event with the Atlanta Falcons in 1998 was the one of the most memorable of all his professional stints as a footballer, but as a budding artist, The Voice is the stage where he’s going to reach the masses with his true passion.