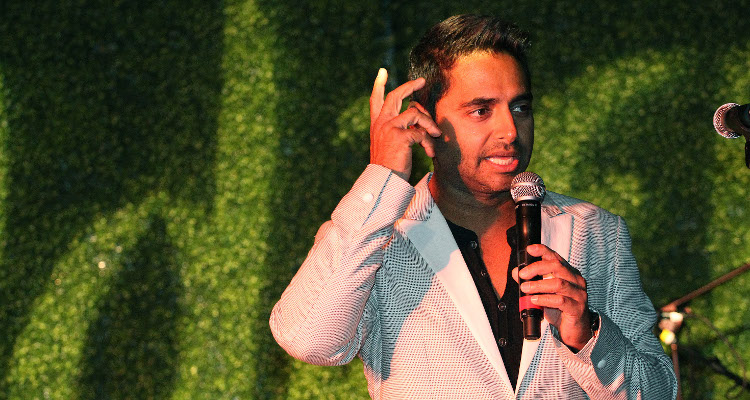 Rohan Oza on Shark Tank was a long time coming. Dubbed the “Brandfather” of Hollywood, he has a knack for turning food and beverage products into household names all over the world through genius celebrity endorsements.

Shark Tank season 9 premiered on October 1 with a new face joining Mark Cuban and the rest of the sharks. Rohan Oza has turned products into globally-recognized brands, and any aspiring entrepreneur would be lucky to have him on their side.

Rohan Oza’s Shark Tank debut already allowed him to find a business, and he’s looking forward to building it up. Find out about this brand-building guru in Rohan Oza’s wiki.

He Worked His Way Up

Rohan Oza was born in Zambia to an Indian family and though he was raised in Britain, he now lives in the U.S. He is a highly sought-after marketing expert, but success didn’t come to him overnight. Like the products he worked with, he had to build his own brand in the industry. He got his professional start working in a candy factory.

He studied at Harrow, a famous private boarding school in Britain, and graduated from Nottingham University. His first job after graduating was in a factory for M&Ms. He worked on the manufacturing side but had a passion for marketing. However, his boss didn’t think he had the necessary marketing skills.

“I said ‘alright, let’s agree to disagree,’ and I left to go to Michigan in the U.S. to study for my MBA. I always wanted to be building an iconic brands and the U.S. is the place where all of those global brands were at the time,” said Oza.

He Made Sprite Cool

The 45-year-old always dreamed of working with a major American brand. He said, “I thought of Coke as the best brand in the planet.” And when he graduated from the University of Michigan, he landed his first job at the beverage giant where he honed his brand-building expertise.

At Coca-Cola, he made Sprite reach more youth, particularly teens as well as the African-American community. And, he also made Powerade a strong rival in the sports beverage market against Pepsi’s Gatorade. He said, “I made it the hottest brand among the American youth by fusing Sprite with hip-hop and basketball.”

Oza proclaims he’s not “corporate” and some of his business tactics were considered disruptive in a large company like Coca-Cola where “there are too many cooks in the kitchen.” Since he was expecting to be fired, he quit before they could throw him out.

He Took a Risk

The “brand messiah” took a huge risk leaving a mega-company like Coca-Cola for a brand that was still finding its footing. After Coke, he became a partner with Glaceau, who manufacture Vitaminwater and Smartwater. His bosses and many others at Coke thought he was crazy, but he saw the potential of investing in something good.

He invested in Vitaminwater and took the company to new heights. When he first partnered with Glaceau in 2002, he made the company a profit of $25.0 million. In a few years, Vitaminwater was making roughly $700.0 million a year. Ironically, Coca-Cola bought the company in 2007 for $4.2 billion.

His net worth hasn’t been calculated, and he likes to keep his value a secret. “Let’s just say my mum is very proud. I know business publications like to talk about net worth but I don’t really like talking about it.” He has since propelled brands like Vita Coco and Pop Chips as popular healthier food and beverage alternatives.

He Has Celebrities on Speed Dial

The guest shark is a pioneer in getting celebrities to promote his brands. He used to distribute bottles of products like Vitaminwater at airports so flight attendants and other influential people would like it and recommend it to others. But with the stringent security in recent times, he needed some other influencers.

He was looking for someone to endorse Vitaminwater, and 50 Cent was a fan. They contacted him, and the rapper was easy to convince.

Curtis Jackson wanted to be involved, so alongside his reported $5.0 million paycheck, he also bought a five percent equity stake in Vitaminwater. He promoted the drink so well, the brand took off.

A lot of celebs have approached Oza since then to invest in fast-growing consumer products. Some of the investors who cemented associations with brands through Oza include Jennifer Aniston, Rihanna, Katy Perry, Guy Ritchie, and many more.

His recent venture was with the naturally-sweetened antioxidant beverage, Bai. Oza brought Justin Timberlake to the brand who endorsed, invested, and became a partner in Bai. It was recently purchased by the Dr. Pepper Snapple Group for $1.7 billion.

He debuted in Shark Tank and secured his first deal on the show. Megan and Scott Reamer of Jackson’s Honest make all-natural potato and tortilla chips and accepted Oza’s $1.25 million deal for five percent equity.

Jackson’s Honest has yet to turn over a profit, but we’re sure Oza can call one of his celebrity friends to make it happen!