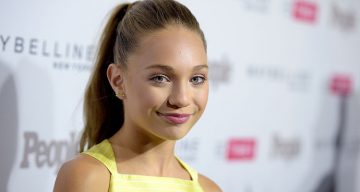 Maddie Ziegler is doing much more at 14 than any of us ever imagined. She’s on a dance tour, she has released her memoir, she has a clothing line, she will star in a movie, she’s a model, and if you haven’t already noticed, she is Sia’s dancing prodigy.

Sia’s go-to dancer, Maddie Ziegler won’t be getting nostalgic about her Dance Moms past. Dance Moms’ coach, Abby Lee Miller is known for her demanding manner of teaching, which Ziegler said gave her stress at only 11 years old. But she’s now doing great things with a dance tour and a recently released memoir, among many other hidden talents. After finding fame so early, how does this dancing wunderkind fare in the love department? Though she’s only 14, many people are already asking, “Who is Maddie Ziegler dating?” Find out about Maddie Ziegler’s boyfriend in 2017and more details about the young starlet’s life, right here.

When they were around 12 years old, Ziegler was rumored to be dating Jacob Sartorius —you know, that 14-year-old Internet celebrity with a voice to die for? There was even a photo that surfaced of the two kissing, and their fans were excitedly writing these two off as an item. Who wouldn’t? They are two adorable kids with amazing talents, and are perfectly matched together.

But unfortunately, the young love rumored between the two was just that; a rumor and fans have debunked the claims that Ziegler is dating Sartorius. The viral pic was said to be photoshopped, while others claimed that the girl is not the Ballerina actress, at all. That put an end to what would have been one of the greatest young Hollywood couples since Justin Timberlake and Britney Spears!

Also Read: Sia’s New Album and Songs 2017: Check Out Her Music Video for “Never Give Up”

Wherever Maddie goes, little sis Mackenzie usually isn’t too far behind. The two inseparable girls have been touring together and performing in different cities around the world. At 12, Mackenzie, who was the youngest dancer on Dance Moms, is no longer the baby girl with the big moves anymore. She’s now a singer and YouTube star, as well, and she seems to be growing up faster each day!

Like her sister, Mackenzie was at the center of her own dating rumor at the age of 12 with another Internet-born tween singer. The 13-year-old singer from Canada, Johnny Orlando has been seen in a few of Mackenzie’s Instagram posts leading to speculation that they are dating. They are performing in shows together, but the true nature of their relationship leaves everyone guessing. She was also rumored to be dating another Internet star, Mark Thomas, but her mother slammed those claims because the boy is older.

TORONTO IS SOLD OUT! TICKETS FOR PHILLY AND NYC STILL AVAILABLE!!

A Budding Romance on the Road?

It appears that Maddie has a new boyfriend in 2017. The 14-year-old was with her sister on their Australian dance tour, when she took a break to post on Instagram. She shared a shot of her cozying up with an Australian teen named Jack Kelly.

Kelly has his arm affectionately wrapped around Ziegler’s neck while she takes a snap of their reflection in the mirror. She captioned the post with a simple heart emoji. Kelly posted the same picture and caption on his own Instagram account, and in the world of tween love, if that doesn’t scream dating, nothing does! Maddie didn’t explain the picture to her 9 million Instagram followers, nor did her sister or mother respond to fans questions.

It doesn’t end there. Kelly posted a picture of him kissing Ziegler on her forehead captioned, “See you soon” and a heart emoji. A long distance relationship perhaps? The two posted the same picture a week ago of Maddie sitting on Kelly’s lap. While she captioned it with “Missing you” and a heart, he wrote “Miss my girl.” Ahh, young love. We won’t be listening for wedding bells anytime soon as the couple are still just teenagers, but we’ll keep an eye out on this budding romance. We are yet to see any hand-holding, a major sign of “bf/gf” status among teen romances!