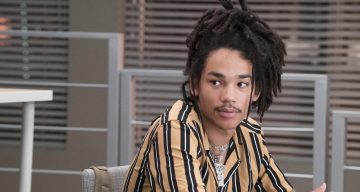 Is there a new beau in Kourtney Kardashian’s life? The oldest Kardashian sister was spotted with model and actor, Luka Sabbat and since then, the rumor mill has been on overdrive! He comes from an influential family and has already made a name for himself in the fashion industry. And if you’re wondering why he looks so familiar, that’s because you’ve probably seen him on Blackish! Our Luka Sabbat wiki has the details on this dread-locked hottie and what may or may not be brewing between him and Kourtney K!

Who Is Luka Sabbat?

Luka Sabbat, age 20, was born on November 26, 1997 in New York but was raised in Paris. He is of Irish, English, Haitian, and German descent.

Although he hated the cameras and fashion while growing up, Sabbat ended up pursuing a career in acting and modeling. He even attended fashion shows during his earlier years, sitting in the front row. Clearly, his looks caught him attention even if he never thought they would!

Sabbat went to college but decided to drop out during his first semester. But not for the reasons you might think. In fact, he got more motivated after ditching his studies!

He said, “I skipped that whole college ‘get drunk,’ ‘get all these girls’ attitude; I skipped that and went to work. I got super professional out of nowhere.”

The 5’10” hunk is a big fan of tattoos, and he revealed in an interview that he has 30 of them inked on his body. All of Luka Sabbat’s tattoos are symmetrical or centered.

He Comes from an Influential Family

Sabbat’s grandmother was an interior decorator. His mother Jessica worked as a fashion stylist for several years but now she is a chef. In fact, when she was involved in the fashion biz, Jessica used to work as a stylist for huge names like Dior and Galliano!

@LynnLevoy @juneandjess our sweet sweet boys make me proud everyday. When I see them it always makes me think about how the #future is now….#proudfather #smile

Sabbat’s father, Clark Sabbat, is an American born to Haitian immigrants. He is a renowned fashion designer who has been in the industry for more than twenty years. He’s currently a freelance designer associated with J.Crew, Ann Taylor, and Loft.

Luka Sabbat also has a younger half-brother through his father named Callum. The two look very similar and it appears Callum is following in the footsteps of his older brother and planning to get into modeling, too! (It is isn’t shocking, considering he literally looks like a clone of his big bro!)

In an interview, Sabbat revealed that he never thought he would pursue fashion as a career, despite coming from a fashion background.

He said, “I never thought about fashion that much. I was way more into hip-hop or playing video games or sleeping than modeling.”

In 2015, Sabbat was discovered in SoHo by a photographer and casting agent named Kevin Amato. He was looking to cast young talent for Hood By Air at the time.

Sabbat later signed with ReQuest Model Management and there was no looking back. Since then, Sabbat has worked with brands like Dolce & Gabbana, Vogue, Hugo Boss, American Eagle, and Tommy Hilfiger.

Sabbat’s also been working with Kanye West for many years. He walked the runway at West’s “Yeezy Season 1 Presentation” at New York Fashion Week.

Currently, Sabbat is working as a designer. He is the artistic director of a Hot Mess, which started as a photographic collaboration with photographer Noah Dillon. The collection was later displayed at Milk Studios in New York, and the Hot Mess merchandise collection was born as a result.

Sabbat is also a collaborator for a jewelry line. He teamed up with Italian designer Gianni Monini to start the Luka Sabbat X Monini line. The jewelry line includes pendants, earrings, necklaces, bracelets, and rings.

He and his father also worked together with Related Garments to start a line of underwear and socks. The brand is called Sabbat X RLTD. All their items bear “Haiti” on them, and 12% of the sales proceeds are donated to the Haitian Education and Leadership Program.

Sabbat made his acting debut with the hit Freeform show, Grown-ish. He plays Zoey’s (Yara Shahidi) potential love interest on the show.

In an interview, he said, “My character is basically me. He’s studying fashion, which is fun because it’s a TV, college student version of me.”

Sabbat and reality star Kourtney Kardashian were spotted on October 10 for the opening reception of Murakami & Abloh “America Too” exhibition, which was held at a gallery in Beverly Hills.

An eyewitness said that the two stayed close together and appeared happy and into each other. But a source close to the Kardashians says that Kourtney is not looking for anything serious right now. They’ve also received a bit of backlash due to the age gap between them; Sabbat is only 20 years old, making Kourtney almost an entire decade older than him. (Then again, she seems to like them young!)

The rumors of them dating began circulating about a month ago, but a relationship hasn’t been confirmed just yet. Others are shipping this couple hard, reminding the public that age ain’t nothin’ but a number!