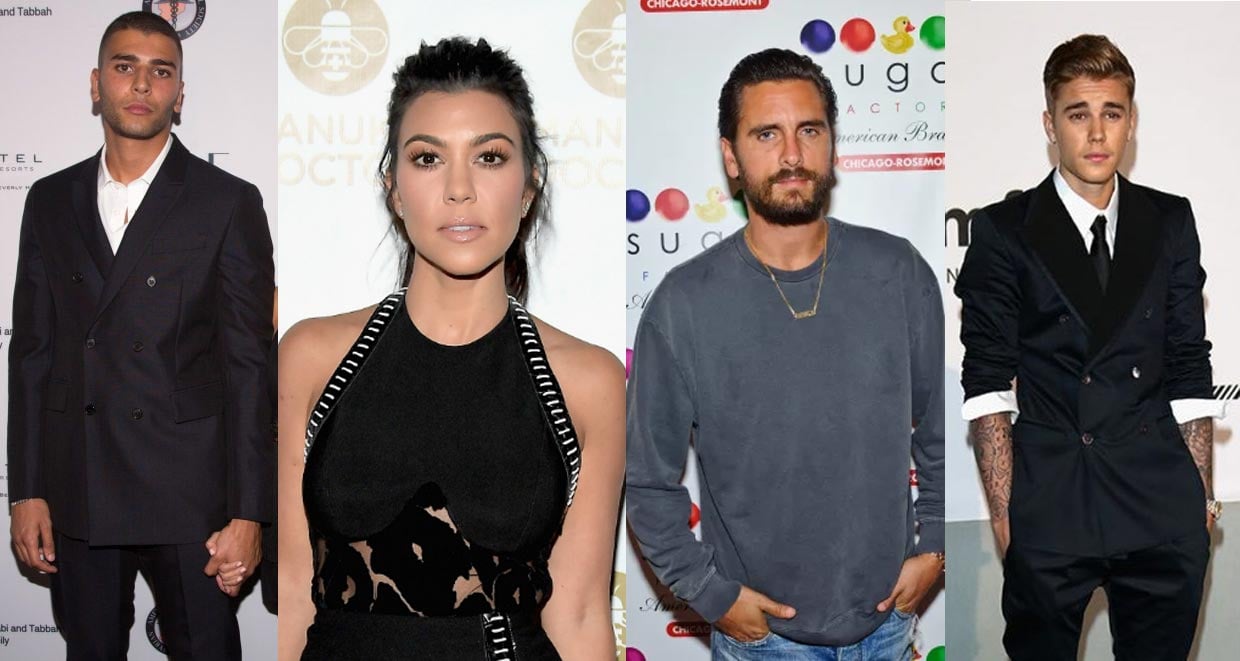 Kourtney Kardashian became famous through her famous family’s hit reality TV series, Keeping Up with the Kardashians. And she’s been one of the most prominent personalities on social media, too! The eldest Kardashian sister seems to love to be the older one in all her relationships, too, as she’s notoriously known to date younger men! So, who is Kourtney Kardashian dating now? Keep reading to find out!

Kourtney Kardashian has been in the eyes of the media for all her relationships. Not only because they were high-profile, but also for the kind of men she’s dated.

From her rumored relationship with Justin Bieber to her latest breakup with Younes Bendjima, 39-year-old Kourtney has been dubbed the “Kardashian Cougar” of the clan!

Check out Kourtney Kardashian’s dating timeline and boyfriends list over the years. 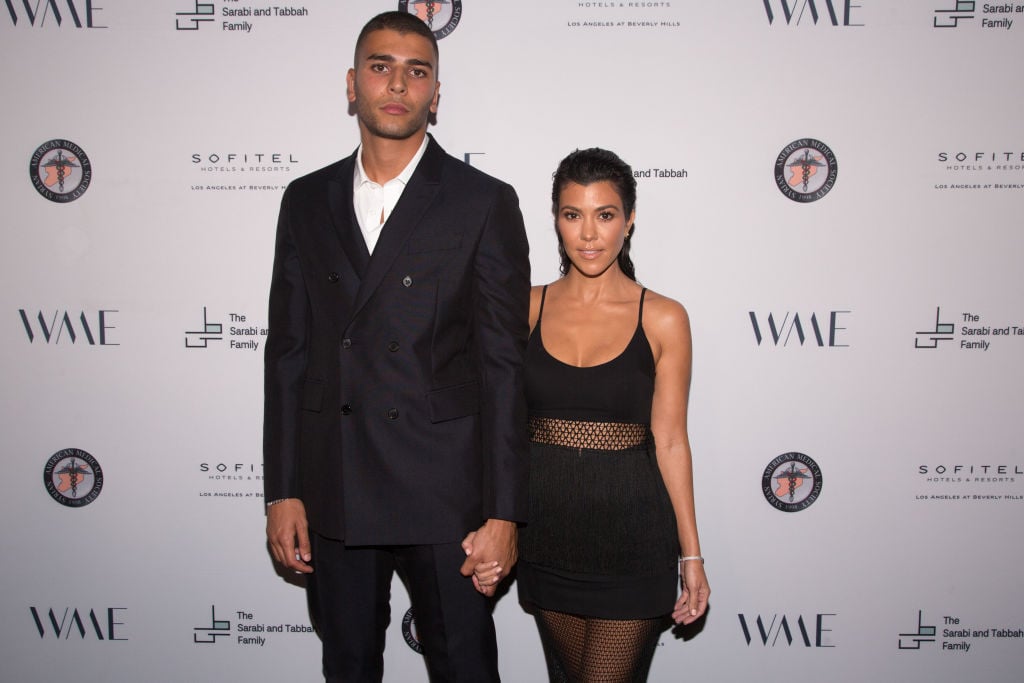 25-year-old Younes Bendjima was Kourtney’s latest boyfriend. And it looks like the couple is pretty serious about each other!

Kourtney, 39, began dating the 24-year-old up-and-coming model around late 2016. But the relationship became public around May 2017. They reportedly met at the Paris Fashion Week in October 2016 hit it off. They were spotted packing on the PDA during several vacations and modeled together.

Things were going well until the cracks began to show. There were rumors of trouble in paradise for a while. But the first sure sign was when Bendjima left a scathing comment on Kourtney’s revealing pic.

And few weeks later, Bendjima is seen partying in Mexico with Jordan Ozuna, the same Hooters waitress who was linked to Justin Bieber in 2013 and Tyga in 2017. Though Bendjima and Kourtney haven’t confirmed it themselves, it appears that these two have broken up.

Bendjima and Ozuna claim they are friends, but Kim and Khloe have called him out in defense of Khloe.

Justin Bieber was 21 when rumors made headlines that he was dating Kourtney Kardashian. The duo was spotted “hanging out” with each other on several occasions, and they looked very intimate with each other.

With the cougar tag she’s been given, fans were almost convinced that Kourtney was dating the pop sensation! But the rumors soon died down, as the two then went their separate ways.

When asked if there was ever anything going on between them, Bieber jokingly said in an interview with The Bert Show, “I’m being used man. What can I say?”

Host Bert Weiss pressed him in that same interview and asked if there was really anything there, but the Biebs responded, “Nah, we’ll leave it at that.”

However, Kourtney did appear on The Ellen DeGeneres Show. And obviously, Ellen couldn’t help but ask what everyone was dying to know!

She asked Kourt about the alleged relationship and said, “You’re smiling as if that maybe it’s beyond friends.”

But Kourtney quickly quipped, “I’ve been smiling this whole time since I’ve been sitting here!”

According to Us Weekly, a source claimed she regretted her rendezvous with Bieber saying, “She feels like she’s being punished and it just goes to prove her initial instinct — that Justin is too young and too immature for her. She’s kind of beating herself up for ever getting involved with him in the first place.”

And soon afterward, the rumors ceased.

Bieber’s on-again-off-again relationship with Selena Gomez has his fans full attention anyway. So, it was a relief that the whole Kourtney-Justin drama was soon over!

Scott Disick is the father of Kourtney’s three kids—Mason, Penelope, and Reign. They began dating back in 2006, but they did not get married during their nine-year relationship!

Scott and Kourtney met when she was 26, and he was apparently 22 or 23 at the time. The couple said that it was not love at first sight and that Kourtney was annoyed by Scott at first!

After dating each other for a while, and sharing three children, Scott also became a vital part of KUWTK. And the family of five were looking happy and settled.

In 2011, Scott purchased an engagement ring to propose. But when he candidly asked Kourtney about marriage, she was not up for the commitment!

Throughout the years on the show, the two had more problems. And Scott’s excessive drinking and partying caused a real strain on their relationship.

It wasn’t long after the birth of Reign that it finally seemed to come to an end for these two.

Scott was spotted making out with Chloe Bartoli on a Monte Carlo vacation, which allegedly further propelled the breakup. The couple is now co-parenting since their split in 2015.

Now, Scott is currently dating 19-year-old Sofia Richie, and it looks like the kids have taken a shine to her as well.

For those of you who don’t know who Michael Girgenti is, he’s the actor who claims that Kourtney’s son, Mason, is actually his child and not Scott Disick’s!

The drama unfolded in 2013 when the actor released a photograph of himself when he was a kid to compare it with Mason’s baby photo! He claims that the couple hooked up after they met in 2008 at a photoshoot.

Girgenti also went to great lengths of filing papers in court to get joint custody of the little one. He claimed that the pregnancy timing fits exactly within the time frame of the unprotected sex he had with Kourtney!

The actor also requested the TV star to take a DNA test. But the Kardashian camp thought of the allegations to be nothing but absurd.

There has been no proof of Girgenti being the father of Mason to date, so it’s safe to say Scott’s got this one!

When Kourtney met her future baby daddy, Scott Disick, Joe Francis was there! He’s a family friend of the Kardashians and the creator of the Girls Gone Wild brand.

It seems that Francis dated Kourtney for about seven months in 2005. But maybe it was just a fling because he later went on to say that he played cupid and introduced Scott to Kourtney.

“I introduced Kourtney and Scott at my house in Mexico. Scott came as the guest of a friend of mine, and they met in my master bedroom,” he told In Touch Weekly.

Joe Francis later dated Abbey Wilson, whom he had twins with in 2014.

Francis, 45, filed for bankruptcy in 2013 and was reported to have moved to Mexico with his baby mama and the twins.

Ah! Young love! The Kardashian’s go way back with the Jackson family, and the kids have not let the “friendship” die. Kim Kardashian dated T.J. Jackson in 1998 when they were teenagers, and her older sister Kourtney seems to have been quite smitten with his big brother, Taryll Jackson.

She and Jackson went out for a little over four years beginning in 2001, but the relationship did not work out. The Kardashian kids and the Jackson kids were pretty close to each other at the time, and according to reports, Kourtney has gone on to babysit T.J’s son Royal, as well!

Jackson’s father, Tito Jackson talked about the how they knew the Kardashian family, and how they were sweet in an interview, where he recollected the days when Kim dated his son T.J. as well.

Taryll is actually Michael Jackson’s nephew, and he has two children named Adren and Bryce with his girlfriend, Breana Cabral.