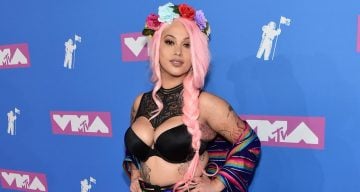 Black Ink Crew: Chicago season 5 premiered on January 2 and jumped right into drama. Tensions are high between 9Mag owner, Ryan Henry and longtime friend, Van Johnson. Just when you think things are getting better, it all goes downhill when 9Mag’s newest artist, Lily Barrios, picks a side. Our Lily Barrios wiki breaks down the drama surrounding the tattooist and the 9Mag beef that’s going down.

Born Liliana Barrios, the 25-year-old is a Mexican-American who was born right in Chicago, Illinois. Her parents are immigrants from Mexico, with her mother hailing from the state of Durango.

She comes from a large family and grew up admiring her parents’ hardworking tenacity. She said her family came to the U.S. to provide a better life for their children and she wants to work hard like them.

Lily appears to be in the U.S. with her mother, younger brother, and uncles. Her father and other members of their family remained in Mexico.

She Became an Alcoholic after Her Father’s Death

Lily’s father was a farmer in a small town in Mexico. It appears that he returned to Mexico with Lily’s younger sisters when Lily was older.

In January 2014, when Lily was just starting her first semester in college, her family learned that her father had been kidnapped by a local cartel in Mexico. They had to pay 50,000 pesos (approximately $2,600) by a deadline. The next morning, Lily was informed that her father was found dead.

His death wasn’t investigated because Lily’s sisters were threatened. Lily and her family in the U.S. couldn’t go to Mexico to attend her father’s funeral because their lives were in danger.

Lily was working four jobs during the time of her father’s murder. She was a bartender in one of her jobs. When her father died, the proximity to the alcohol led her to start drinking to cope with the loss. Her life was falling apart due to her alcoholism until she turned it around, and she’s now been sober for more than three years.

Also Read: Everything You Need to Know about Sidney Star from Black Ink Crew: Chicago

She Practiced Tattooing on Her Friend

Lily had been drawing from a young age and considered pursuing a career that utilized her talent. One of her friends is a tattoo artist who suggested she could use her skills to become a tattooist herself.

She was hesitant and afraid to ruin other people’s bodies with her undeveloped inking skills. But her friend had faith in her talent and offered to be her canvas where she could practice tattooing.

Barrios credited her friend for helping her hone her craft. She’s now known for some vivid artistry, which impressed 9Mag owner Ryan Henry at a Philadelphia convention.

Lily says some of the best clients are strippers. Strippers who come to her to get inked want the best art and are least bothered by the price. Guys, however, are hesitant to get tattooed by her.

Barrios was working at Ink Masters Tattoo Studio in San Antonio, Texas before she returned to Chicago and expanded her career. Her family supported her decision and encouraged her to elevate her career.

From the moment she arrived in Chicago, Lily made it clear that she is self-made and isn’t going to let a man define her. However, that doesn’t mean she’s not open to dating.

The guys at 9Mag appeared to have forgotten their SOs the second Ryan introduced Lily to the crew in season 3. And while they were all attracted to the pretty, young artist, none were crushing harder than Junior Diaz, a fellow tattooist at 9Mag.

Junior made his move and soon he and Lily were dating. She even said in a confessional that they’d been together for a few months, although he got on her nerves at times.

Her family didn’t approve, though. They didn’t have anything against Junior, but they didn’t like Lily mixing business with pleasure.

Lily didn’t heed her family’s advice and dated Junior anyway. However, their relationship became tumultuous pretty soon when Lily’s ex, a guy named Plug, got dragged into the picture. Plug even rubbed the crew at 9Mag the wrong way, which turned into a brawl between Plug, Junior, and Van.

Lily and Junior didn’t work out and her relationship status is up in the air at this point.

She Tried to Restore 9Mag

Longtime Black Ink Crew: Chicago viewers will know that the past year has been difficult for the crew at 9Mag. The never-ending drama at the shop led to Ryan Henry deserting the crew in season 4 and leaving them to fend for themselves. Lily tries to bring back 9Mag but joins the remaining crew to start a new shop.

Barrios along with Charmaine Walker and brothers Phor and Don Brumfield set up Loyal Ink under Van Johnson in the original 9Mag space. But the building’s management wasn’t pleased with how Loyal Ink was operating business and brought Ryan back to restore 9Mag in the same place.

It was chaos everywhere, with Loyal Ink and the new 9Mag facing off and Lily clashing with everyone else at Loyal Ink. She eventually leaves Loyal Ink and makes peace with Ryan.

Van and the others at Loyal Ink mismanaged the business, allowing Ryan the opportunity to get the original 9Mag building back. Season 5 began with 9Mag back in business and Lily in the crew again.

But the drama is far from over. Van and Ryan are still bitter about the whole affair and their feud comes to a head at Lily’s 25th birthday party.

Check out what shenanigans Lily Barrios gets into with the new 9Mag in Black Ink Crew: Chicago, Wednesdays at 9:00 p.m. EST on VH1.

Also Read: Some of the Most Interesting Facts about Ryan Henry from Black Ink Crew: Chicago